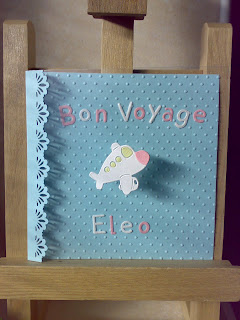 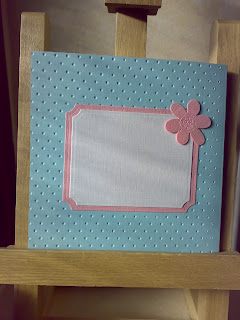 This was a real challenge from 365 Cards... to use acetate for all or part of your card. I had to make a Bon Voyage card for a friend and it seemed that this might be a good one to try to use some acetate.
I embossed the blue card with Swiss Dots and used a Fiskars punch to finish the edge, which I wrapped around the acetate. The little aeroplane is a Cuttlebug die and the lettering is from Cuttlebug's Babyface alphabet, adhered as in my previous post.
The aeroplane is on the acetate and the lettering is on the blue card.
I take the pictures of my cards with a mobile phone so that transfer to my computer is easy, however, the phone is playing silly kids at the moment and wouldn't stay in camera mode, which was irritating to say the least! It's also that awkward time of day when the light is at a funny angle, making finding a place to perch the easel with my card on, problematic.
As the inside of the card has been embossed I had to add a flat bit for the sender to write on, which I put on the back of the card, as there was no-where else to put it!
So for the One Stop Crafts Challenge, this certainly was something new for me!