Several people have asked me where I visited on my recent trip to Australia, so I thought that I would just write a post with a few pics of my holiday!
We began by stopping over in Bangkok for a few days and among other things i took and elephant ride and also 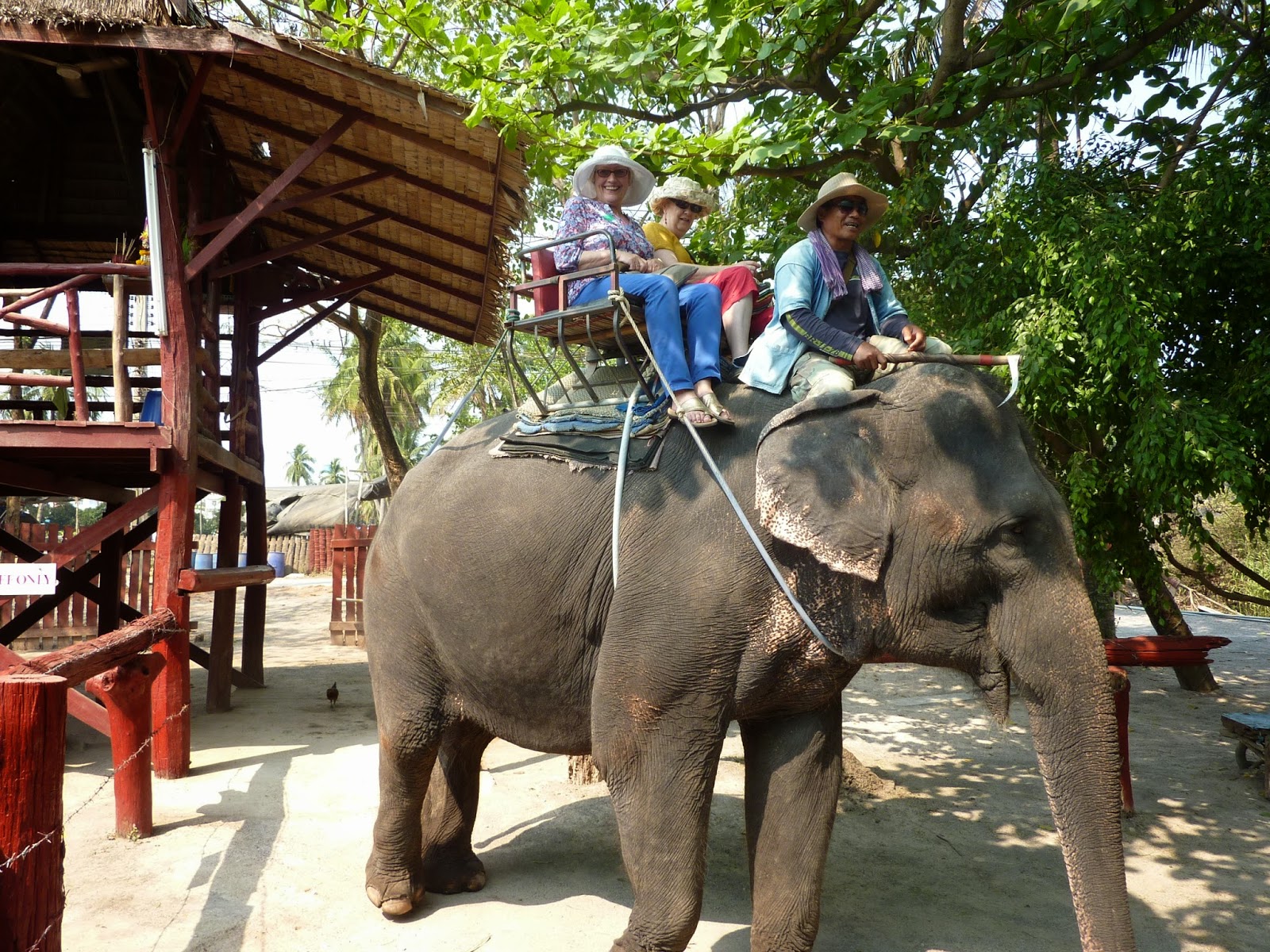 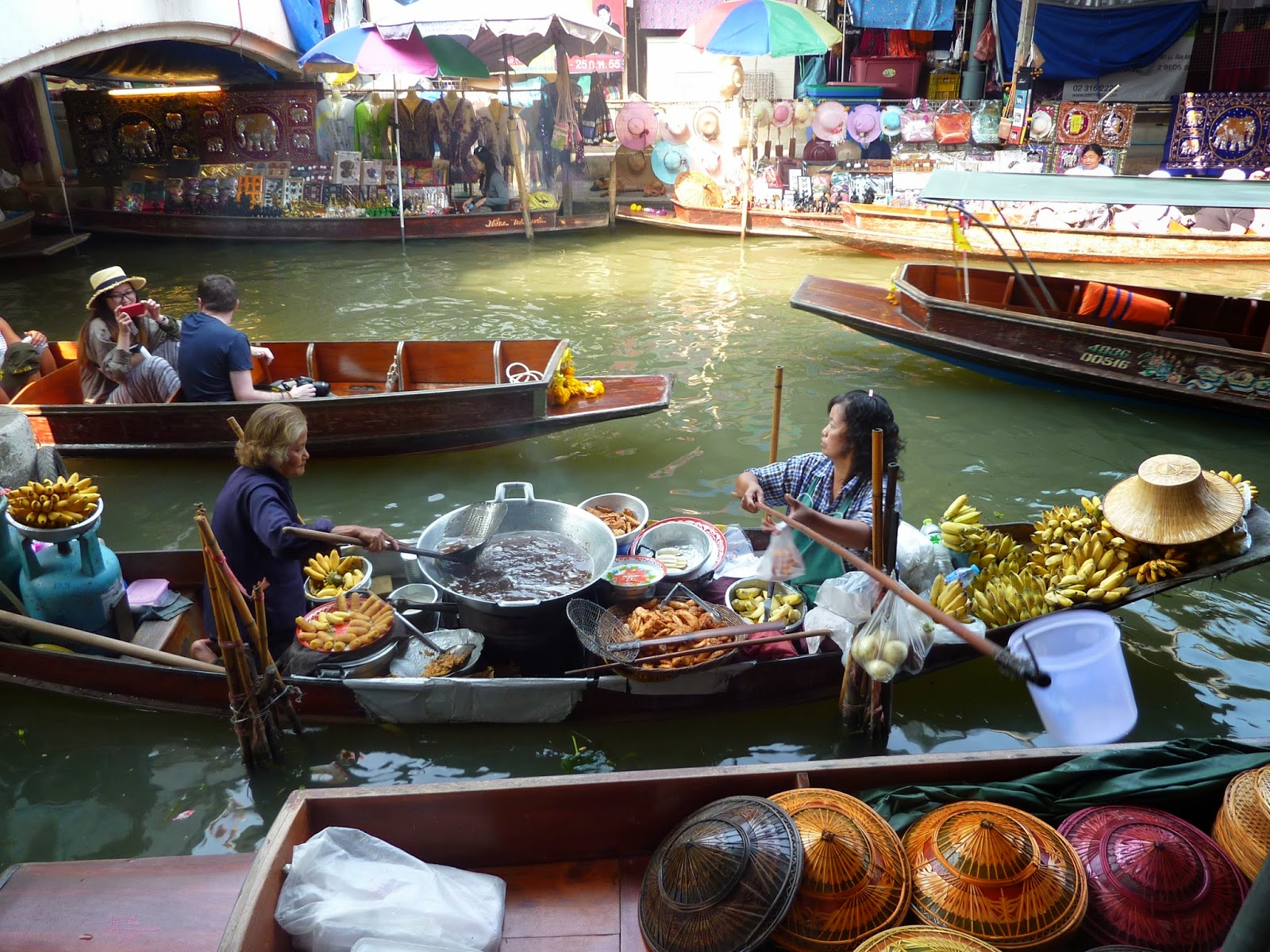 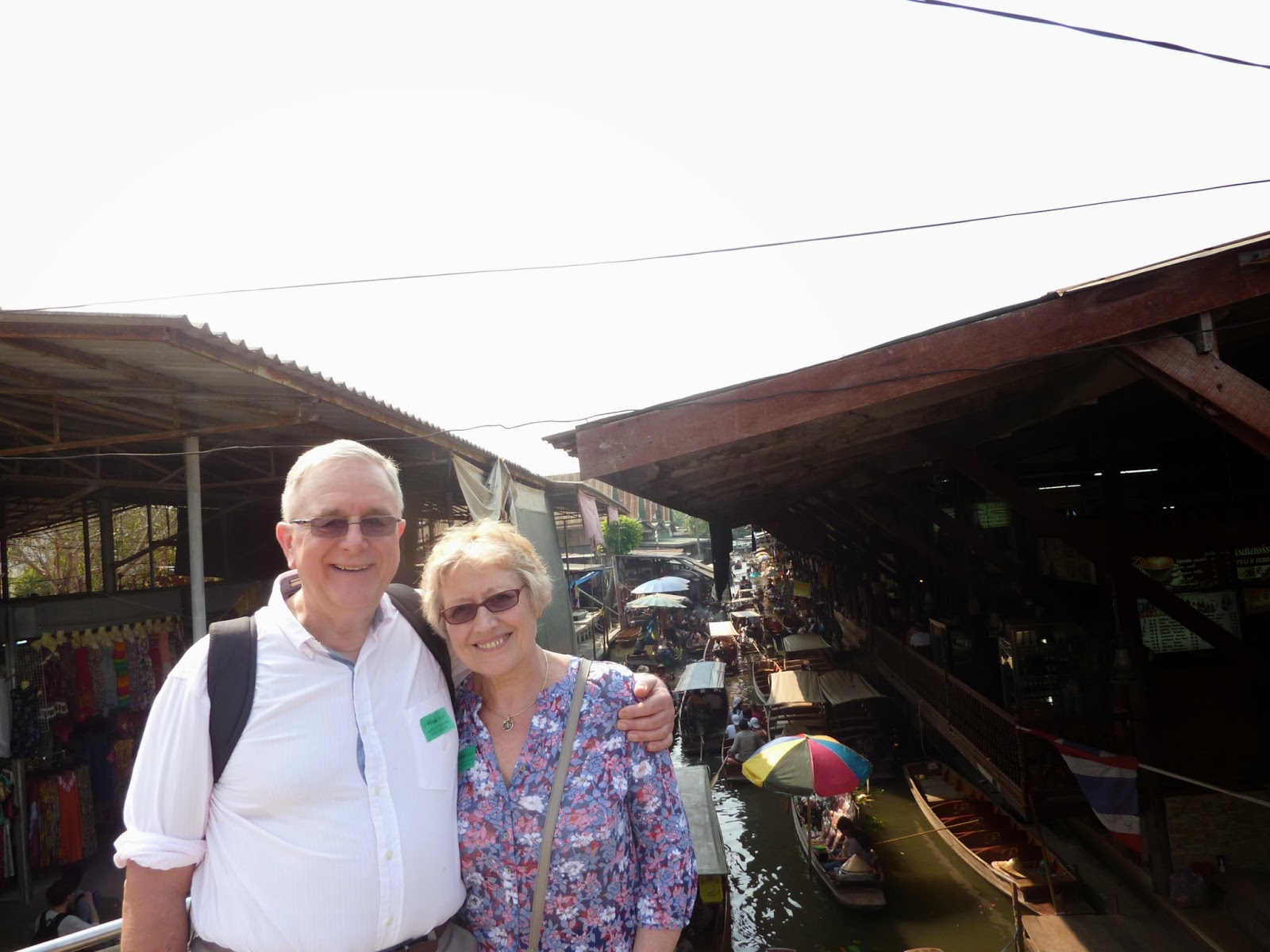 visiting the floating market!
From here we flew to Perth and from there took a river cruise, visited Fremantle and I also managed to catch up with a friend of my daughter's from her University days. 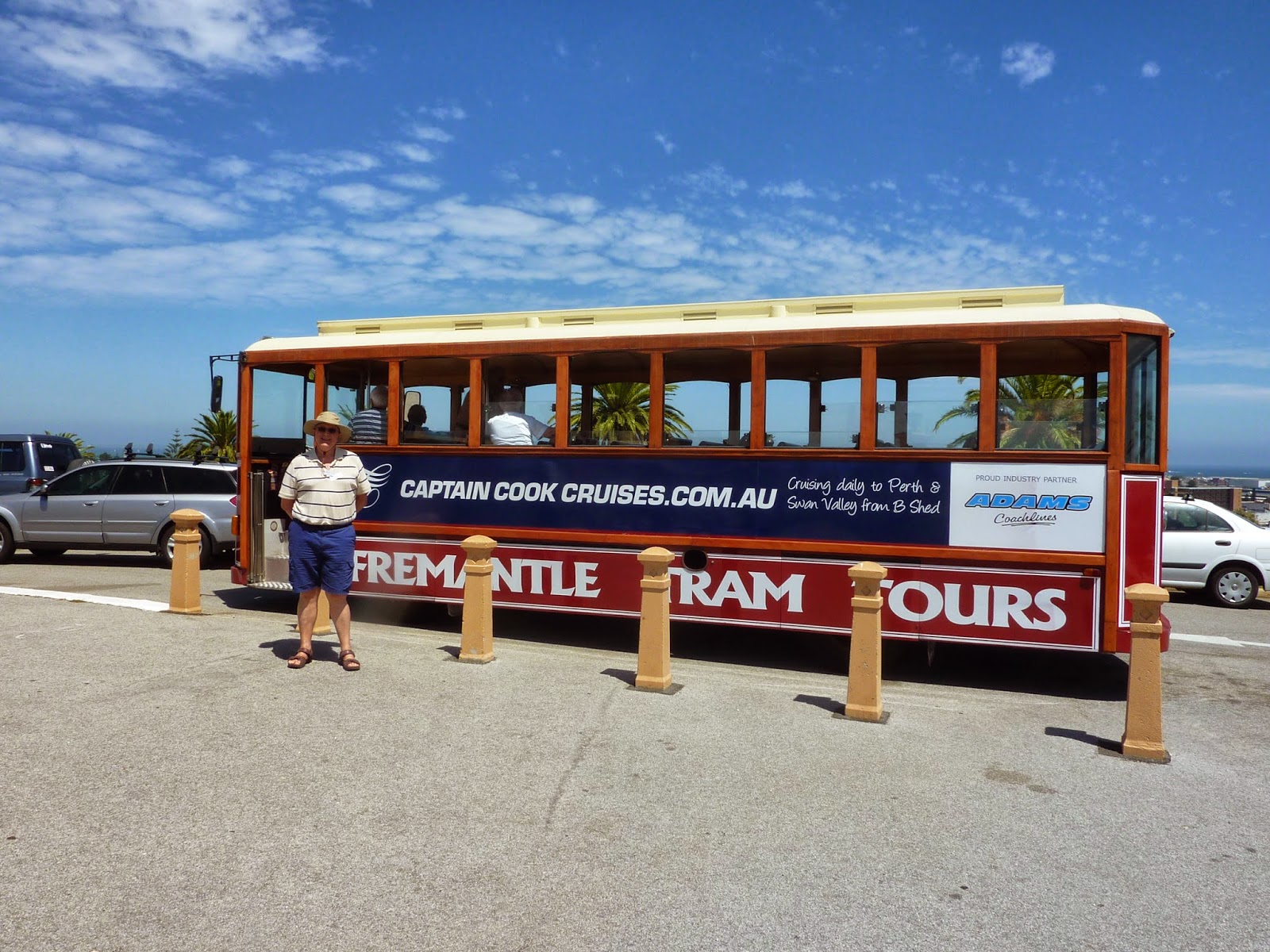 Here is the tram we took our tour of Fremantle on.
We then went to Margaret River and visited several wineries. 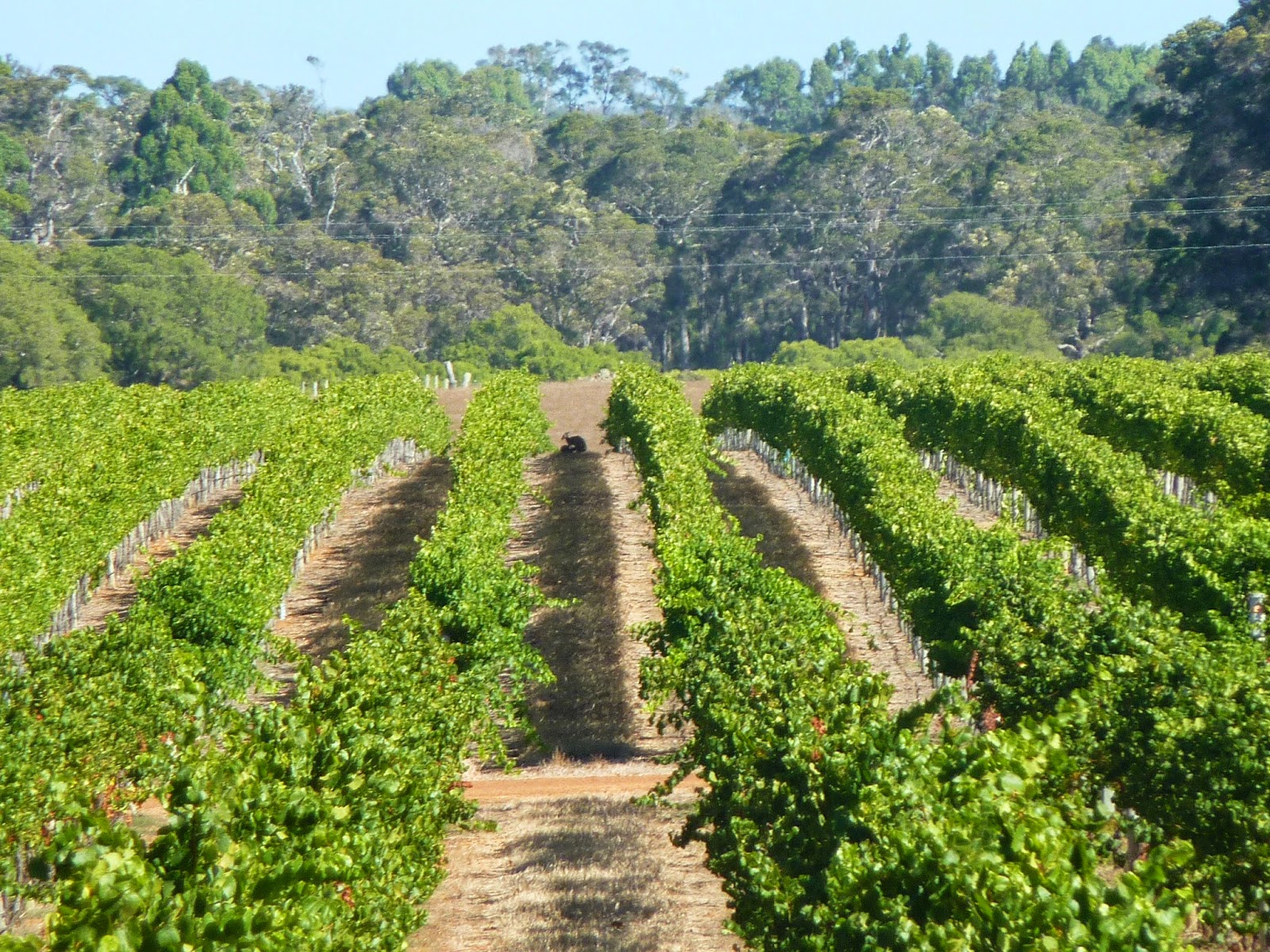 This was my first glimpse of a kangaroo... it was a way away but if you squint you might just spot a couple between the rows of vines in the centre of the picture.
We then flew to Alice Springs and visited the Flying Doctor Service, The School of the Air and the first telegraph station and the actual 'Spring'. These were all brilliant visits and really interesting.
From there we went on to Uluru (Ayres Rock) and had a dinner under the stars following champagne and canapes at sunset! Fabulous! The following morning we were up to see the sunrise at the rock! 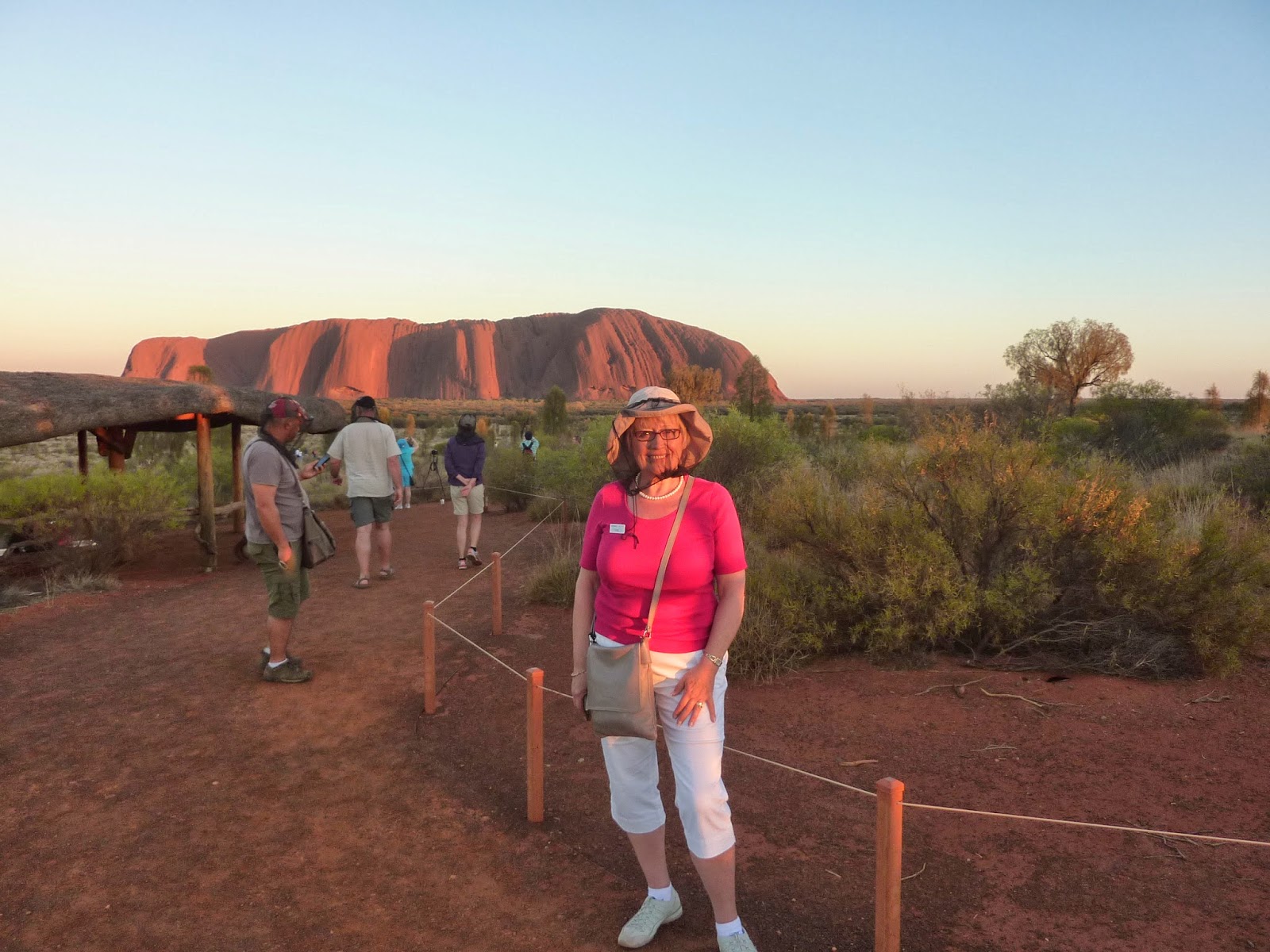 The flies were a real pain.. hence the fly net on my hat!
From here we flew to Cairns and had a couple of days there followed by a couple of days at Port Douglas.
Here we took a trip out to to Barrier Reef, where we took a helicopter trip over it, took a semi-submersible trip to see under it and and snorkelled to see in it! It was a brilliant day and the weather was really kind! 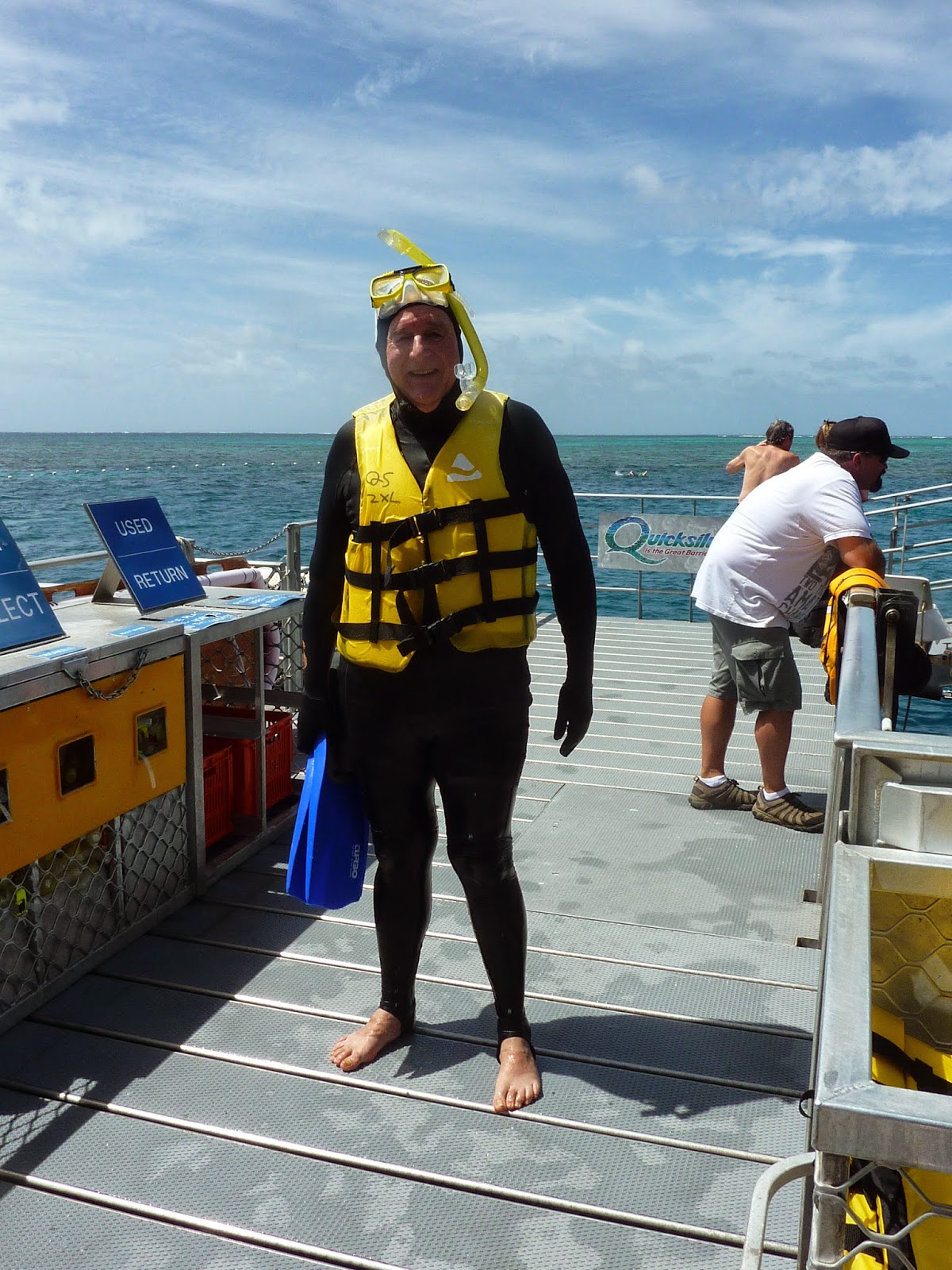 Here is my hubby following his snorkelling adventure. A friend took one of me in my stinger suit, but I haven't managed to get that pic from them yet.
From here we flew to Melbourne and took a superb trip around the cricket ground (my husband was in heaven) and also visited the Old Gaol! (That was great fun!) It was also the rather sinister venue of Ned Kelly's hanging! 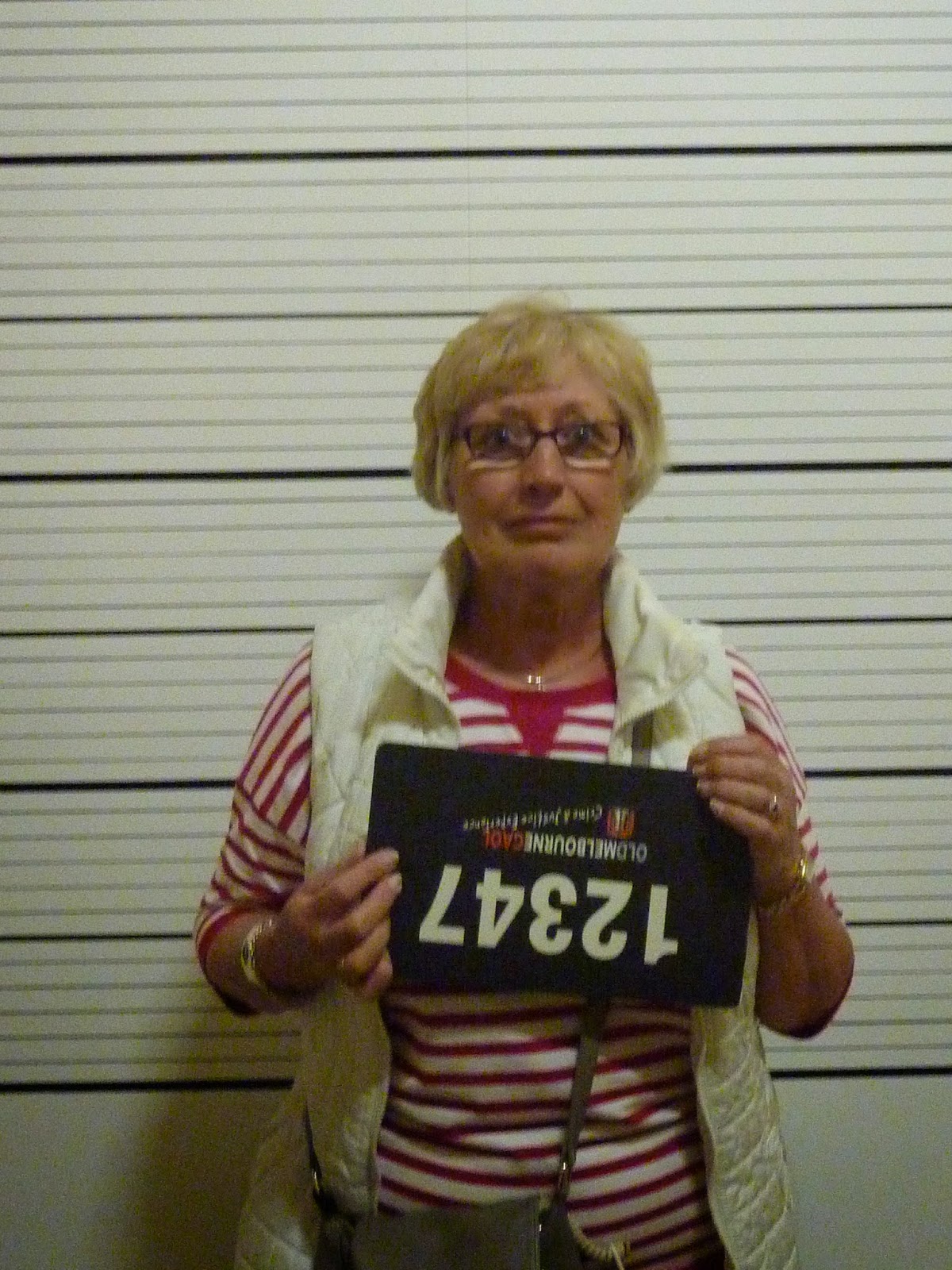 From Melbourne we flew to Sydney and had a wonderful stay once more. This time we managed to see the opera Carmen at the Opera House, which was spectacular and also took a seaplane flight over the harbour. 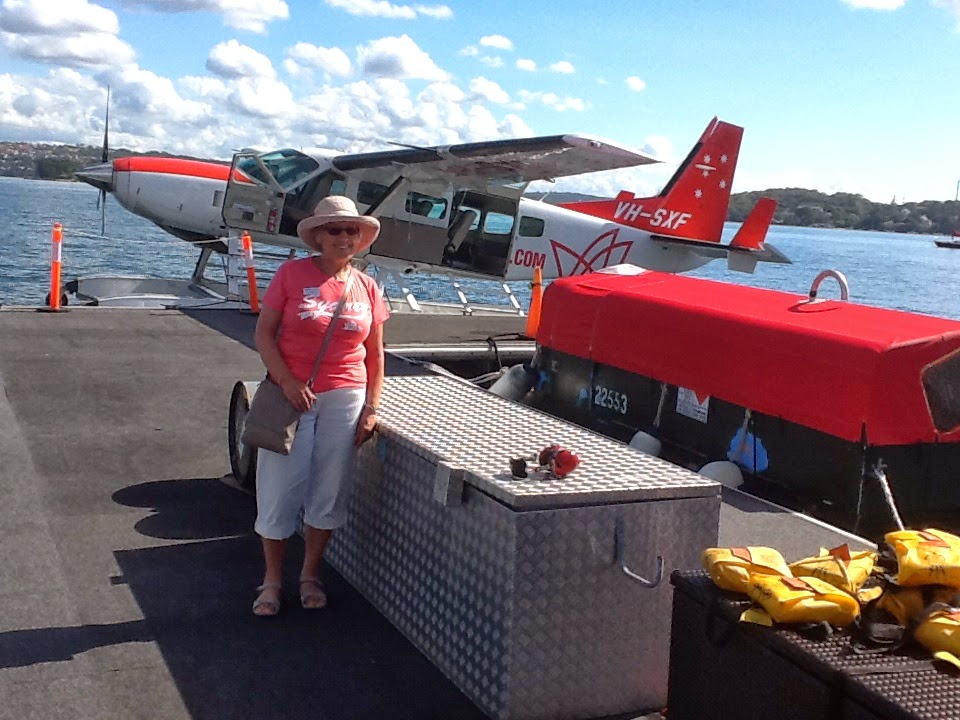 Following this lot we had a couple of days R&R in Sentosa, Singapore!
What a fab holiday!
Hope you weren't too bored!
Posted by Chrissie at 10:35 10 comments:

The theme for our Lucky Dip Week at Less is More this week is
Round and Round.
I feel as though that's a bit how I feel at the moment... going round in circles since returning from my fabulous holiday in Australia. I'm gradually getting back to UK time, but visiting grandchildren and other things meant that I completely forgot to write my post on this my personal blog for this week.
Any way here are my cards! 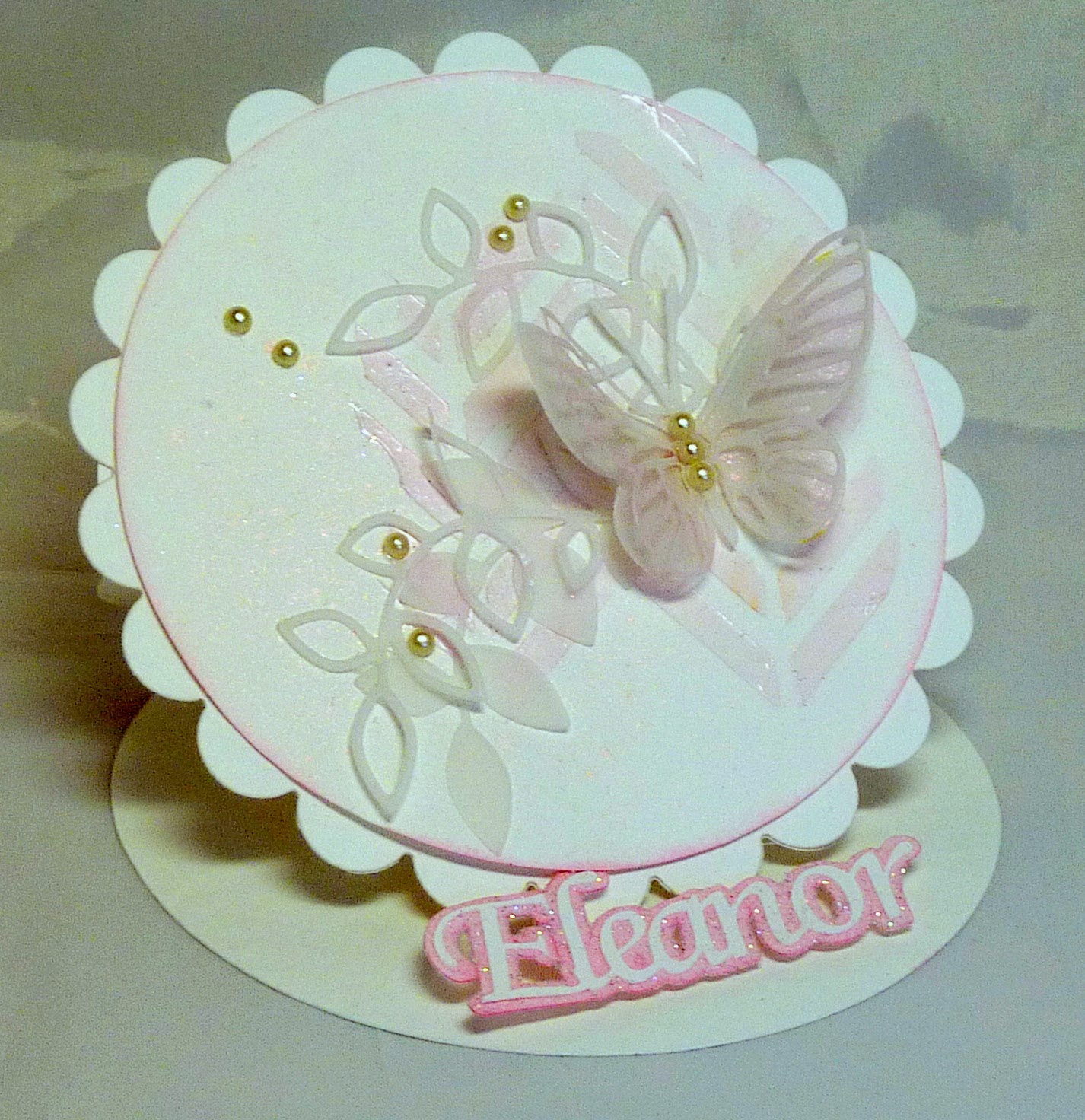 First of all is a circular card employing a little dyed embossing paste and a home made stencil, plus a few die cuts using vellum.
The name was made and cut on my Silhouette. 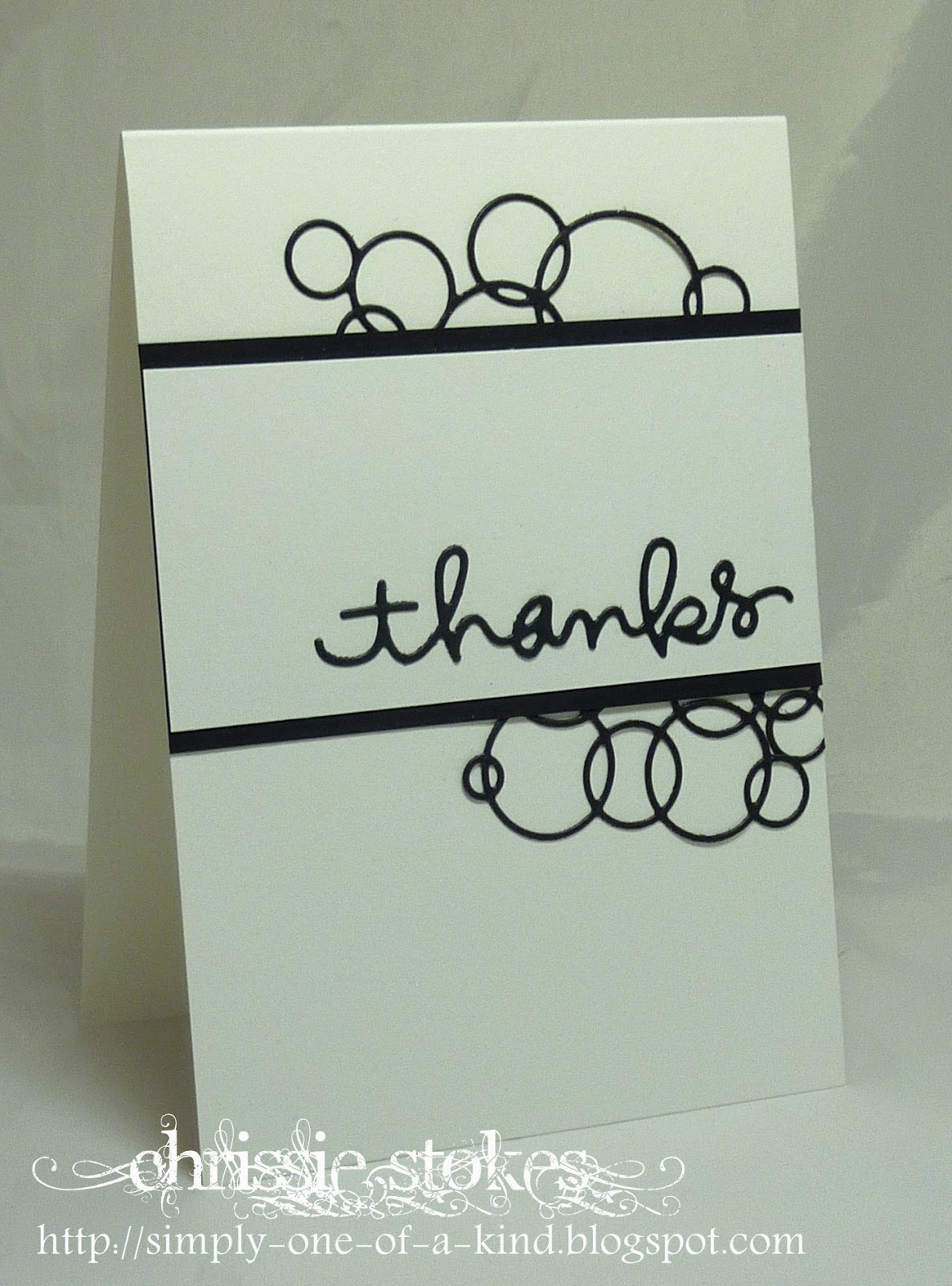 This is simply  die-cuts . The circles were from one die, which I cut into two pieces and added either side of the horizontal band. 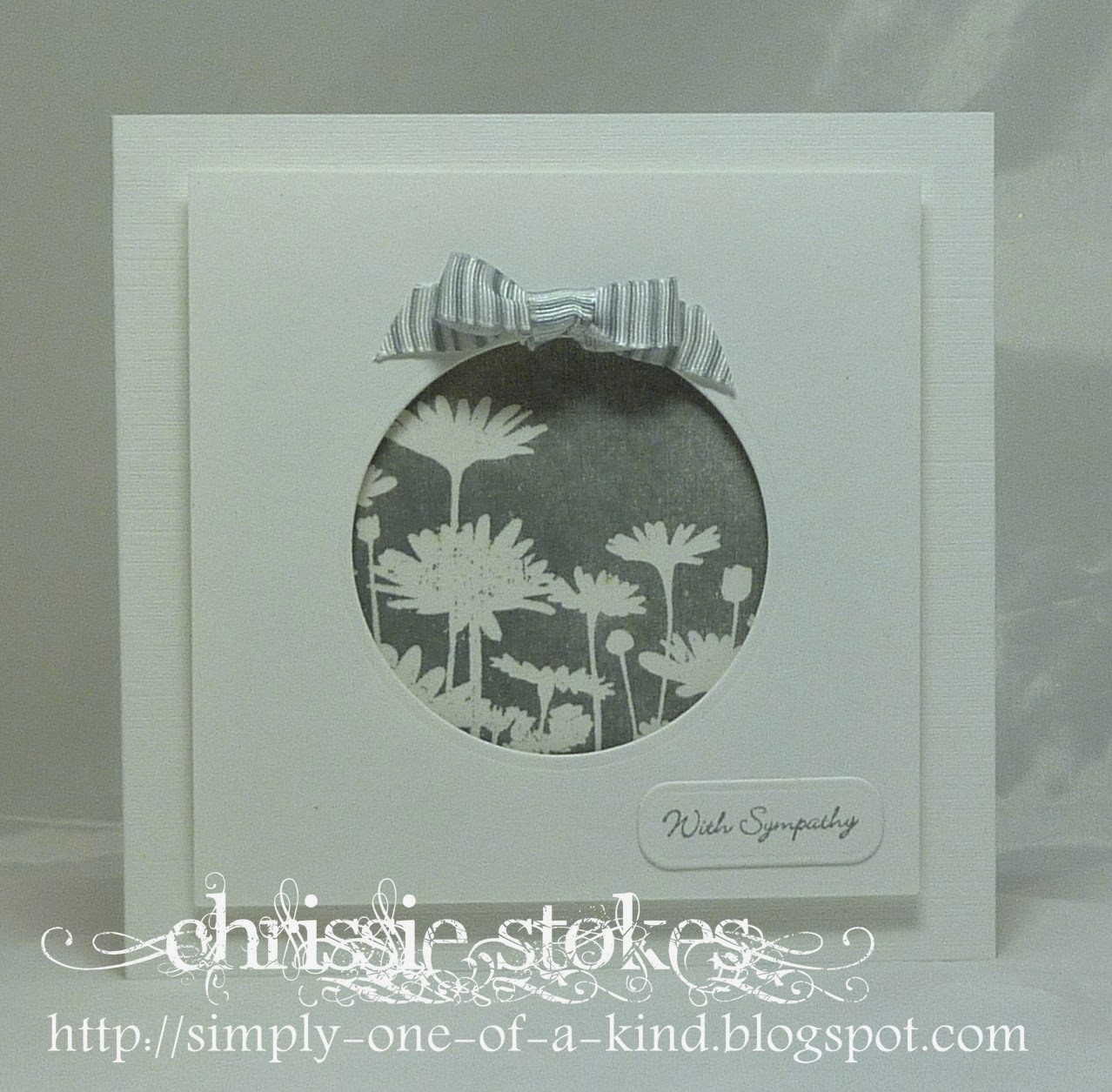 Here a circle was used to frame an emboss resist stamp from Stampin Up!
Now we're off out with our grandchildren on a 'Mystery'.  I wonder where we'll end up? They love these trips...we used to do it with our own kids when they were young and they loved it too! There are some terrific places to visit! 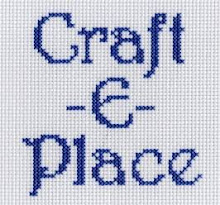 It's Elaine from Craft-e-Place
If you let me know your contact details, I'll get the package sent off to you!
Thanks everyone who left a comment!
Posted by Chrissie at 13:26 3 comments: 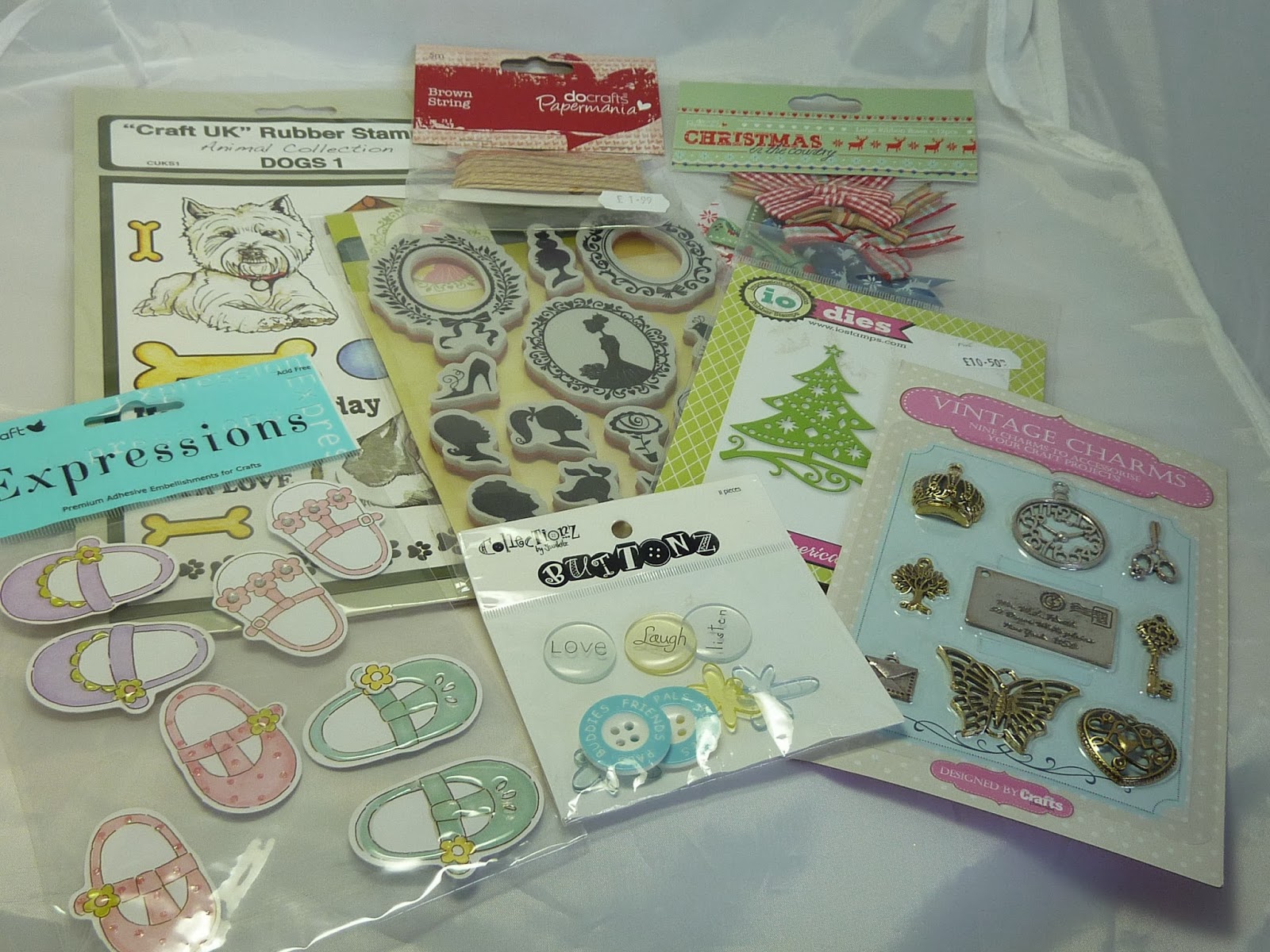 I thought it was about time that I did something that I have intended doing for quite some time....and that is to give some things away!
Here we have some stamps and a die and a variety of embellishments you may find handy!
I'll leave this post at the top until I get back from Oz when I will make the draw!
To be in with a shout, please just leave a comment below.
Thanks so much!

Email ThisBlogThis!Share to TwitterShare to FacebookShare to Pinterest
Labels: Candy

Three of this, three of that! 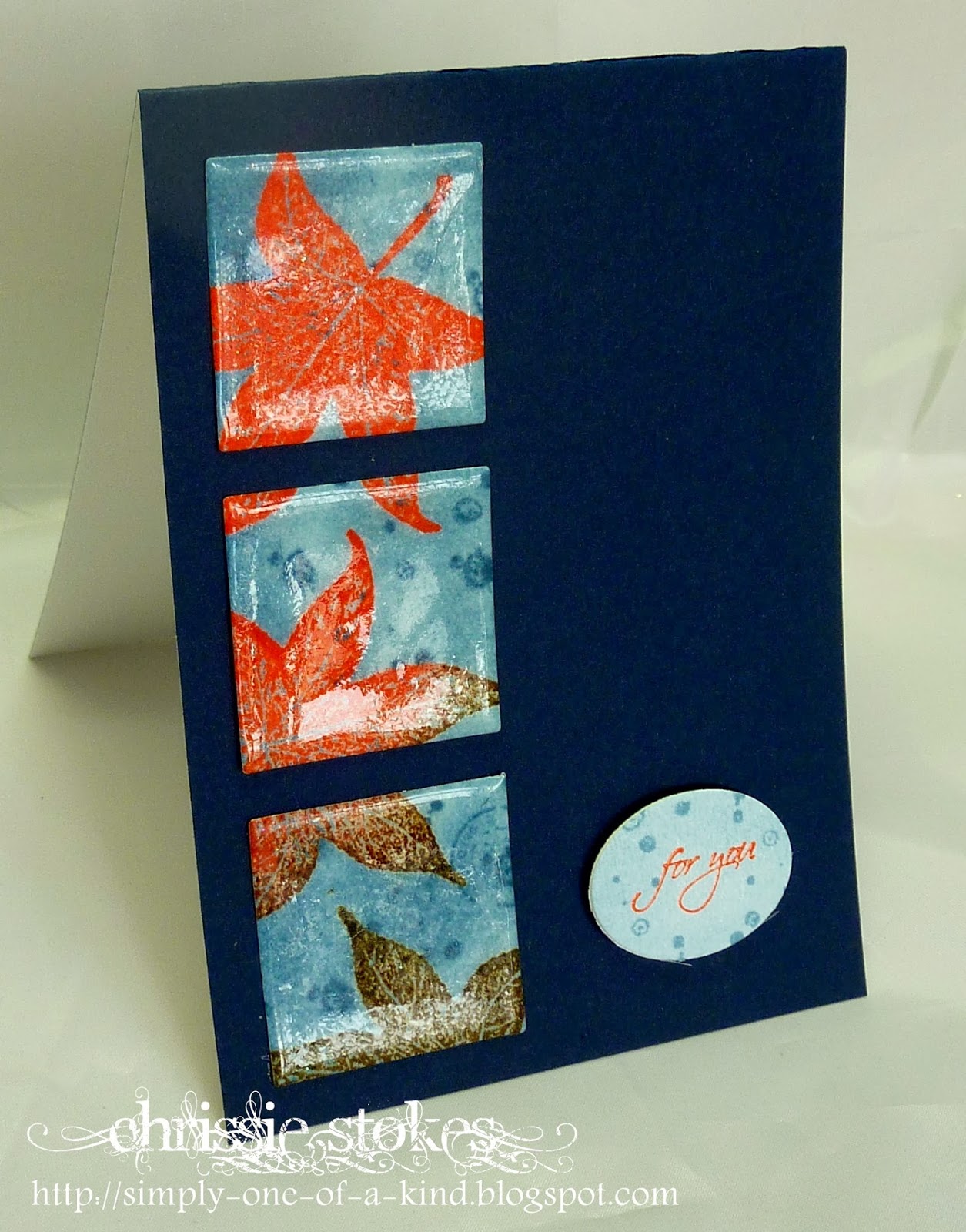 for "Less is More"
I really like this technique.
I stamped the leaves with Distress ink onto a piece of card and then clear embossed the images. I then inked and stamped the background before die-cutting the three squares and triple embossing them with UTEE.
The leaf is a Rubbernecker stamp. 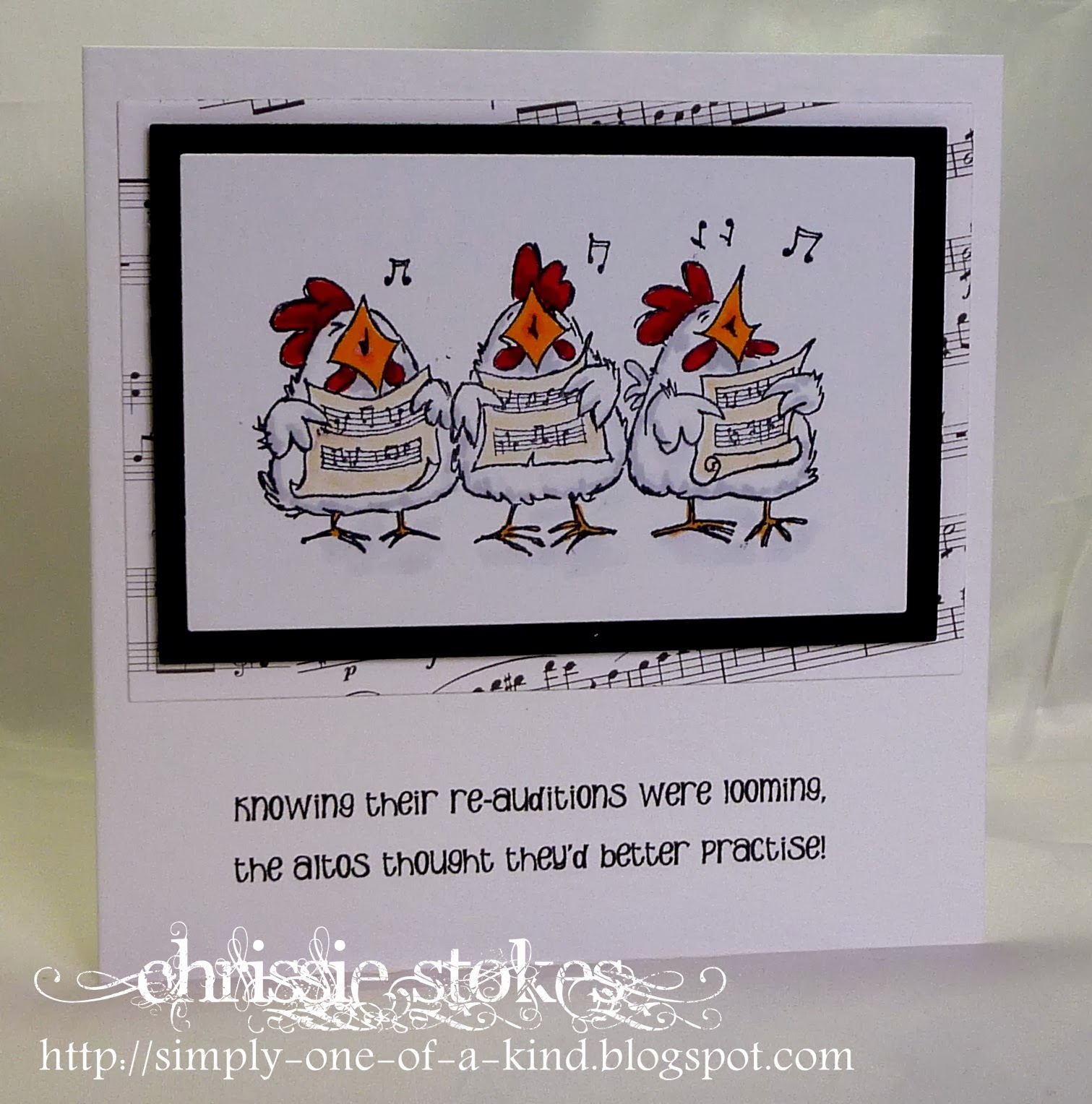 Here are the girls again... three of them!
I love Penny Black chickens and here they are singing their hearts out.
I made this one for my choir. The sentiment reads... "Knowing their re-auditions were looming, the altos thought they'd better practise!" 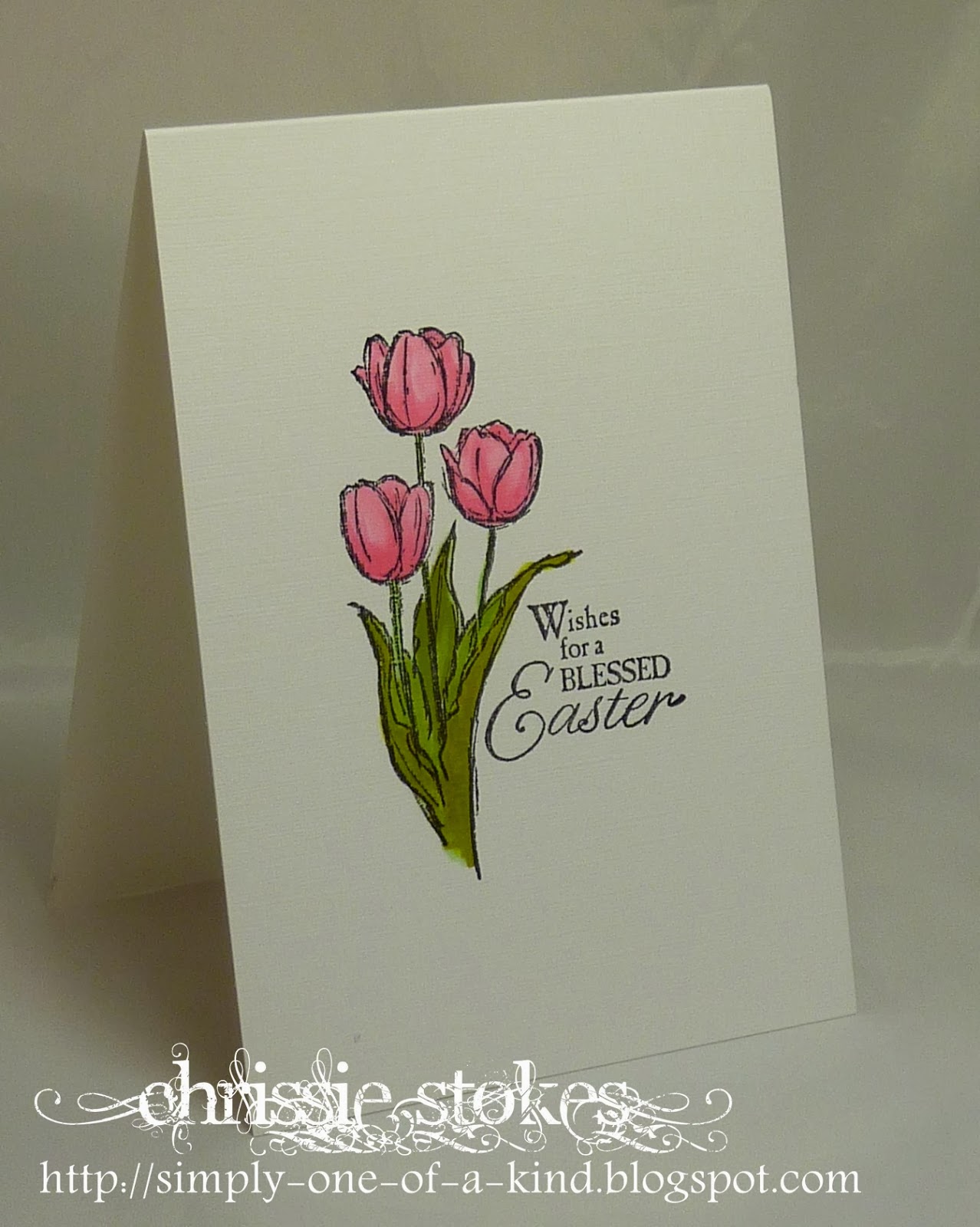 I love this new SU stamp.
Needless to say it's three tulips!
Simply stamped and coloured!
I'll be around to visit a few blogs later this week... I'm looking forward to seeing you!
Posted by Chrissie at 08:00 23 comments:

I recently did an online course on stencilling and since then I have made loads of stencils using my Silhouette. I have also used some dies to make stencils too. It has been fun playing around with them. I even got out my Embossing Paste which I bought ages ago and scarcely used. 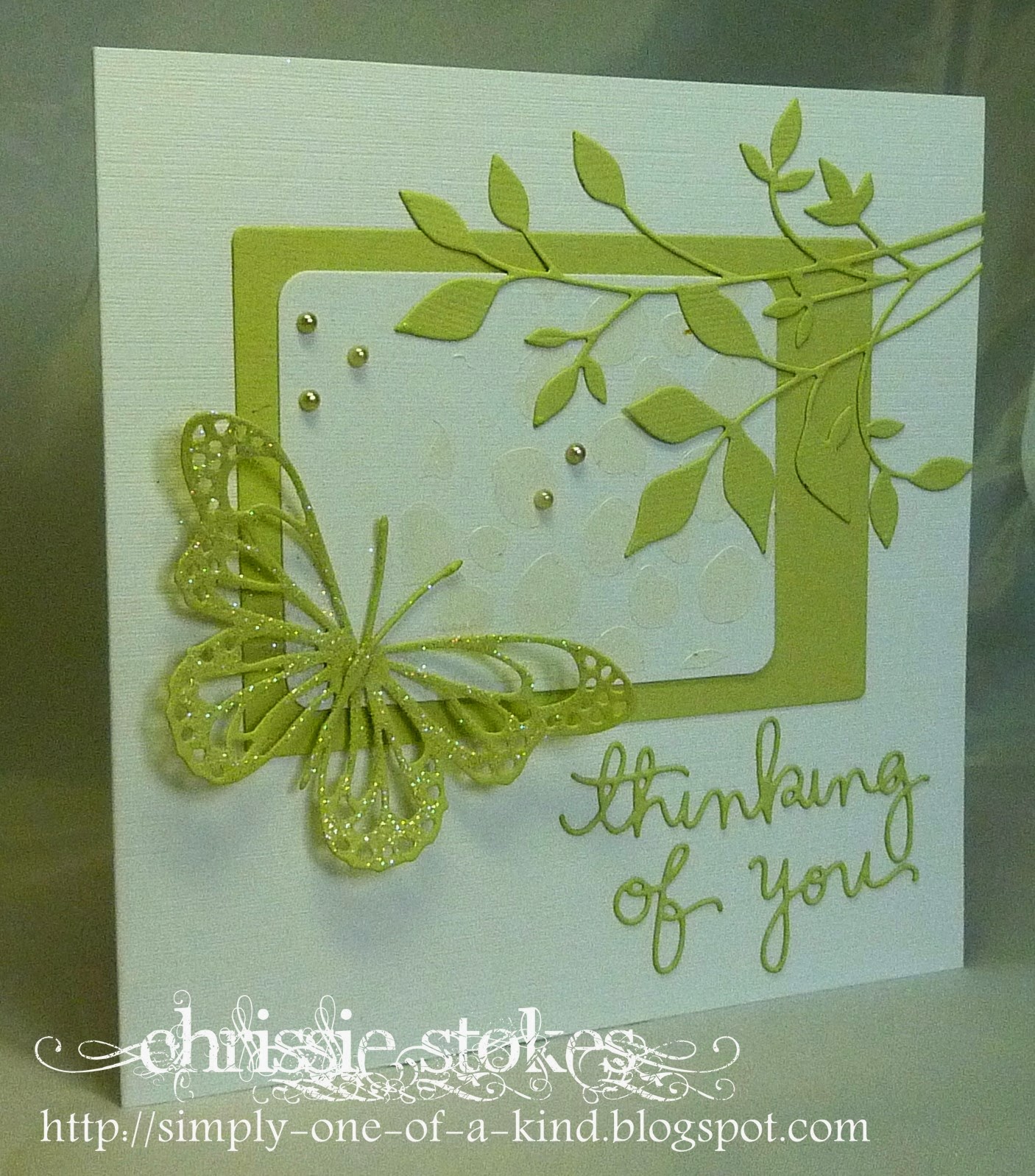 It's quite difficult to spot the embossing on this one. I used Embossing Paste through a stencil I cut with my Silhouette from a font called Peoni Patterns  which is a free font from Dafont.
This was made with 4 letter zeds. There's also a chevron pattern and various flowers ... it's really useful. 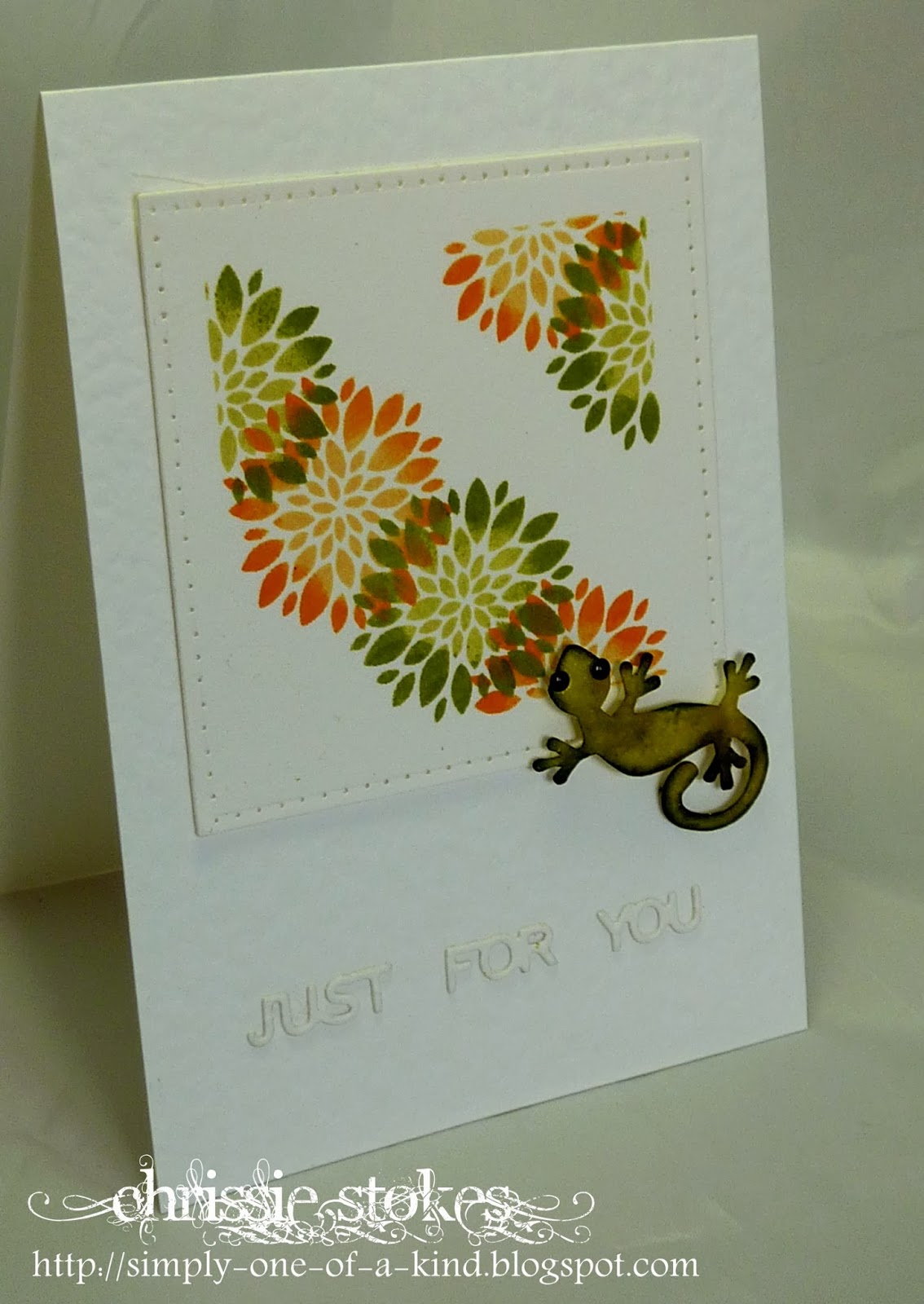 Here's an inked, stencilled background using the same font to create the stencil. This is the letter 'a'! Inked and then rotated and inked again.
The little gecko was another download also cut on my Silhouette. 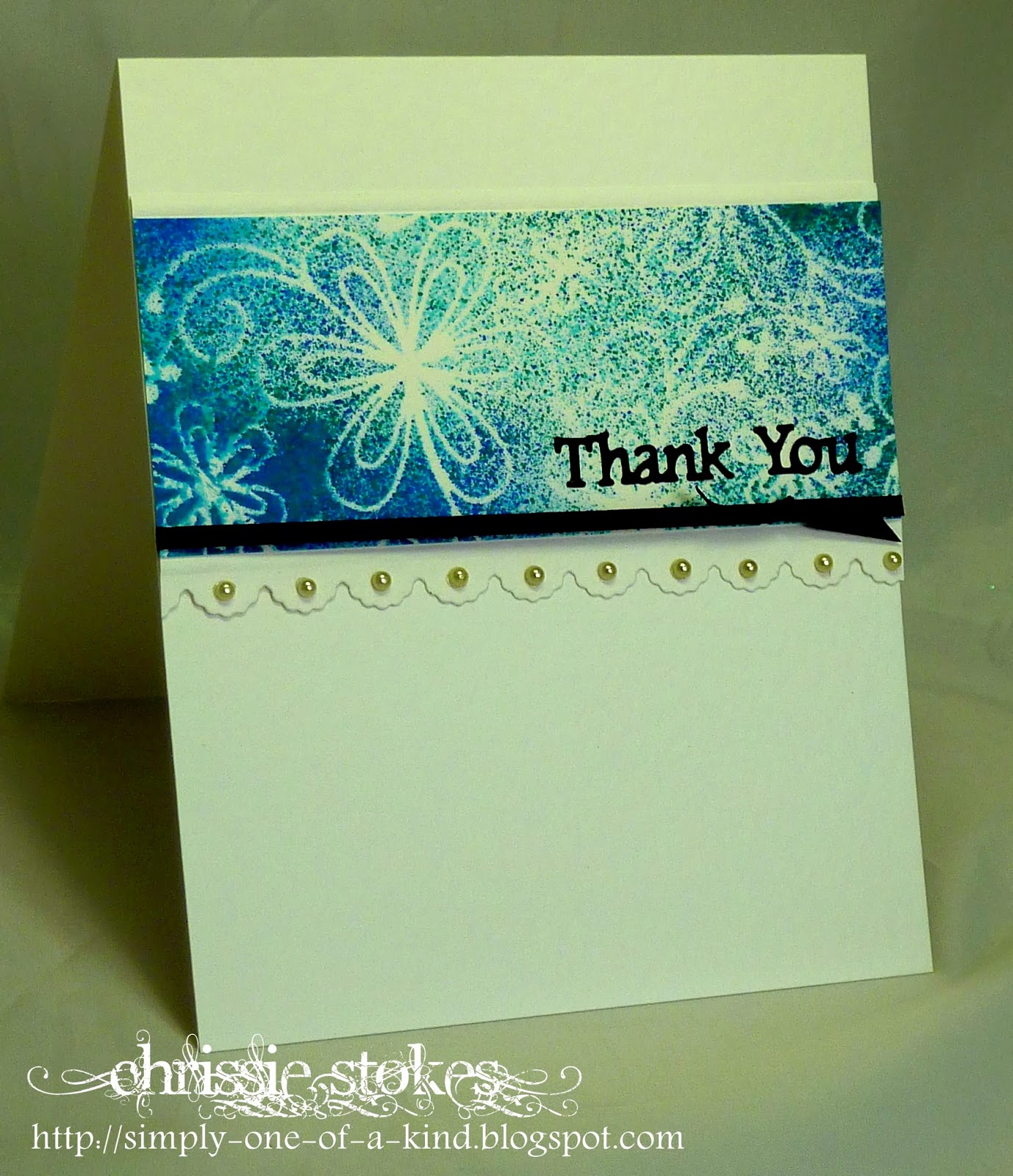 For this I used a Spellbinders Impressabilities I think it's called. I spritzed the colours on using my SU Spritzing tool and SU Markers.
The sentiment is from  Tattered Lace die. It didn't cut too well when it arrived and I wrote to them saying that I was disappointed. They sent me a metal shim to use in my Cuttlebug. It now cuts properly, but you need the muscles of an Amazon to wind the handle to get the sandwich through the machine!! 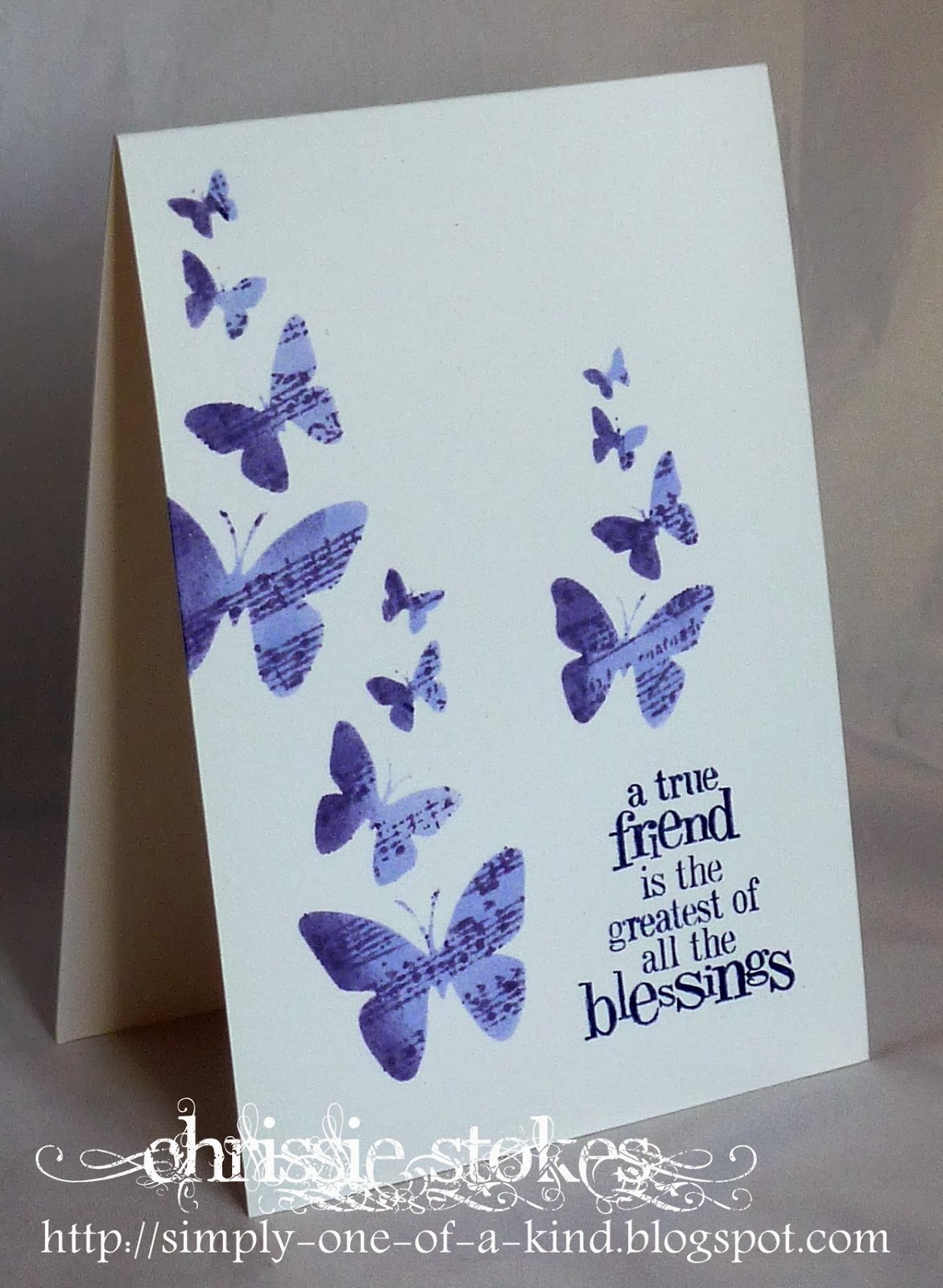 One more home made stencil!
I made it with acetate in my Silhouette and inked it in a couple of shades before adding the manuscript stamp and  sentiment.
I should be home from OZ soon!

Email ThisBlogThis!Share to TwitterShare to FacebookShare to Pinterest
Labels: Stencilling

Another One Layer challenge at "Less is More".
This time it's to be Spring Flowers. I simply love them... they always seem to be so delicate. 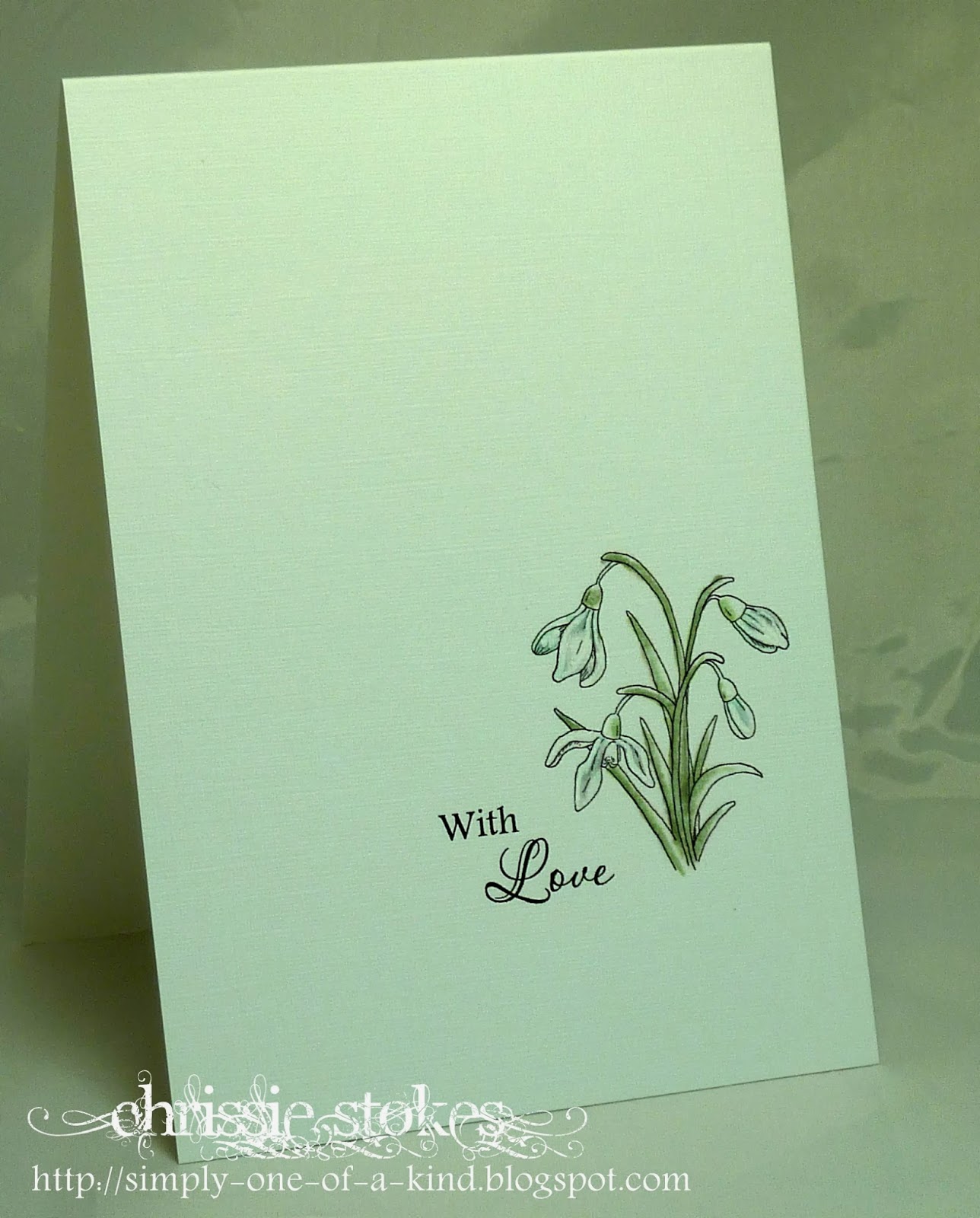 I love this delicate digi image from Fred She Said. It's simply printed and gently coloured with Distress Inks. 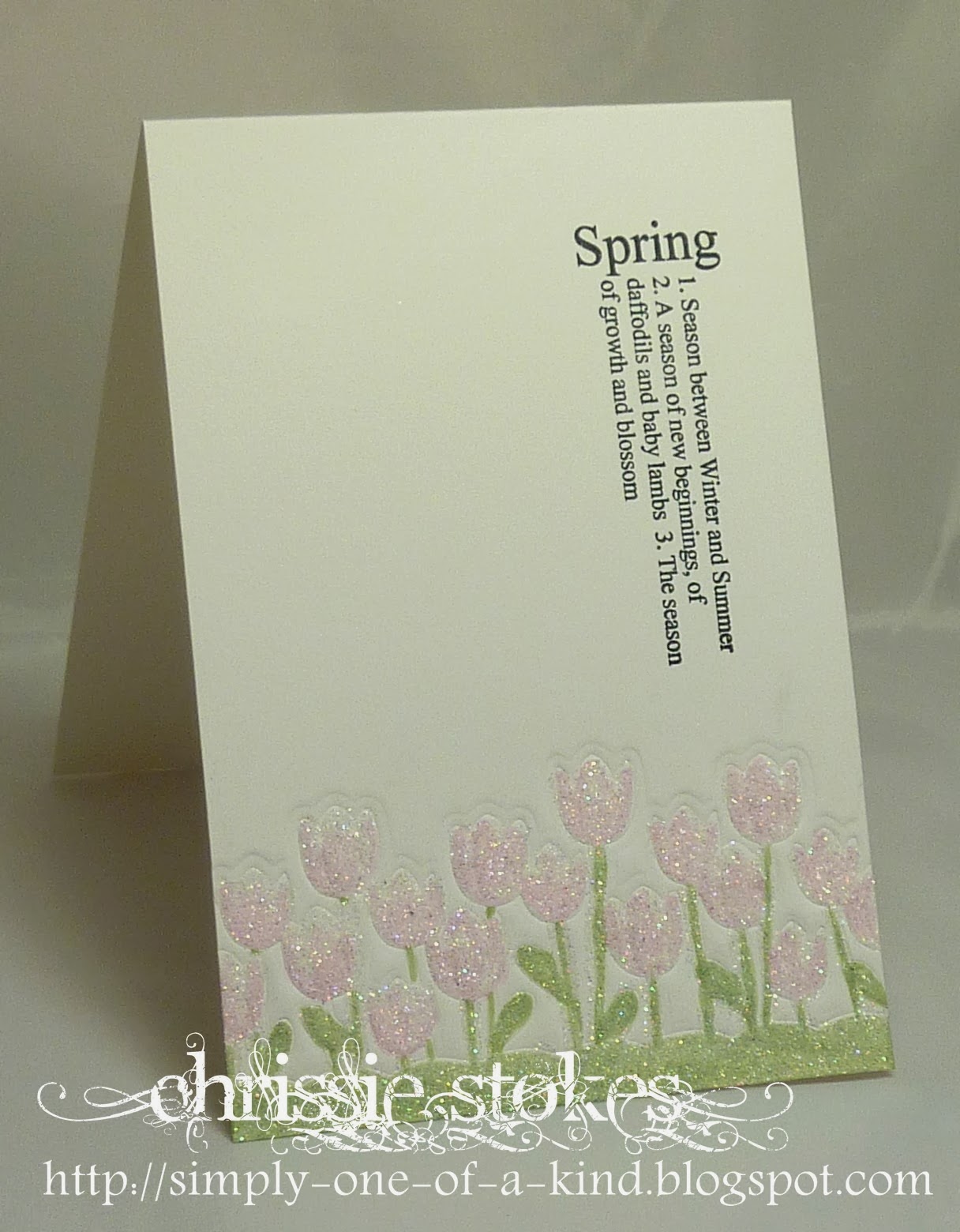 For this I used a die to emboss the flower border, but realised afterwards that in fact I have an embossing folder which is practically identical... it might have been a little easier to use. I simply coloured the raised parts and added some Glamour Dust.
Usually I stamp the sentiment stamp horizontally, but I think it works equally well this way. 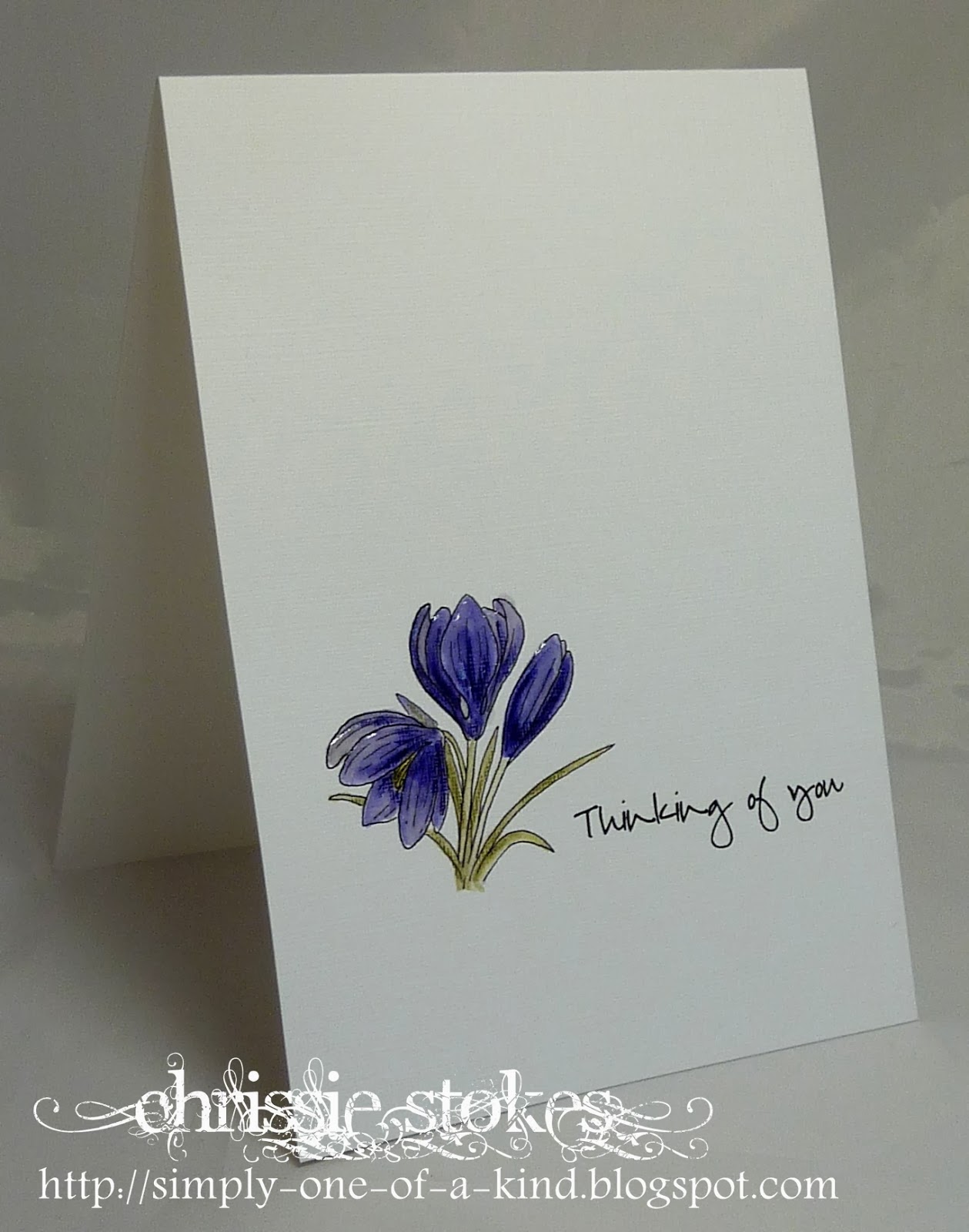 This is another little digi from Fred She Said, this time I added a little Anita's 3D Gloss after colouring with Copics.

Email ThisBlogThis!Share to TwitterShare to FacebookShare to Pinterest
Labels: One Layer, Spring

We have a colour challenge at "Less is More" this week and it's
Yellow and Green. 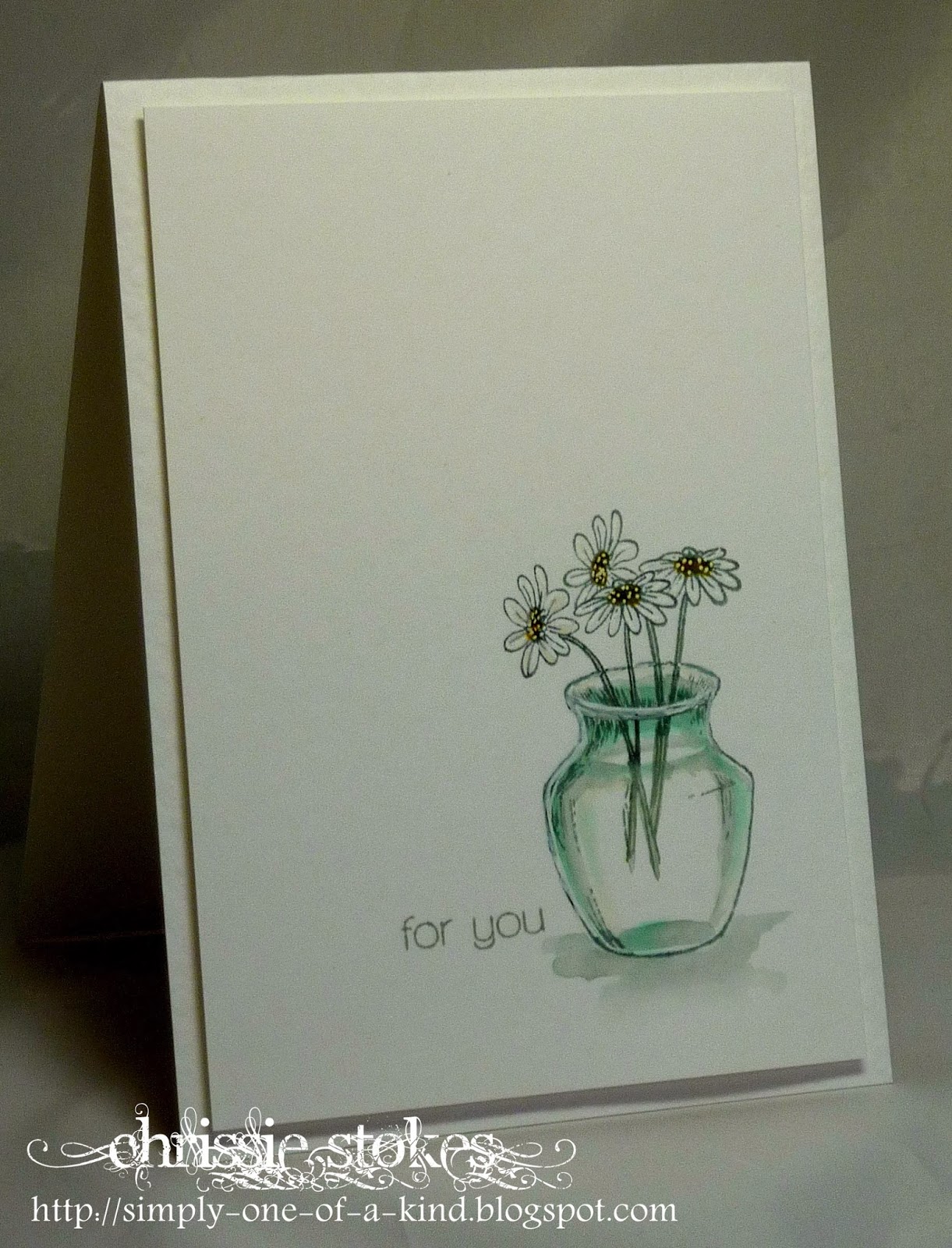 Here I was attempting to colour a stamp to make it look like a glass vase. I used Distress Inks and a little Copic marker. There is a touch of yellow in the centre of the daisies. The daisy stamp was stamped, masked and stamped again and made to look as though they are actually inside the vase! Another daisy digi here, it says DSB on the file but I can't think what that stands for. Any ideas? Once more coloured with Copics and a sprinkling of Glamour Dust!. 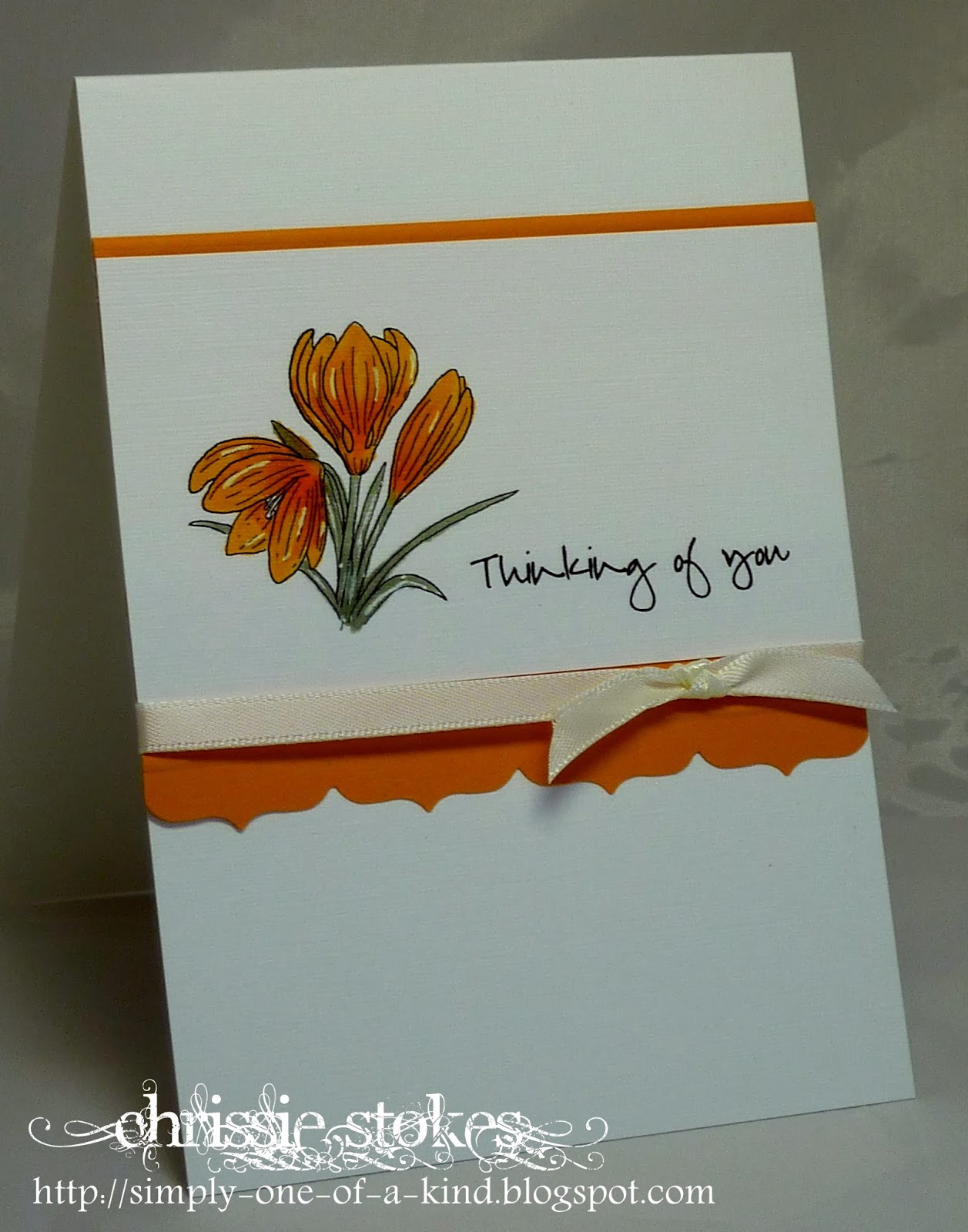 A crocus digi from Fred She Said, coloured with Copics. and a computer generated sentiment.
This actually looks orange, but it is in fact yellow!
Posted by Chrissie at 08:00 21 comments: