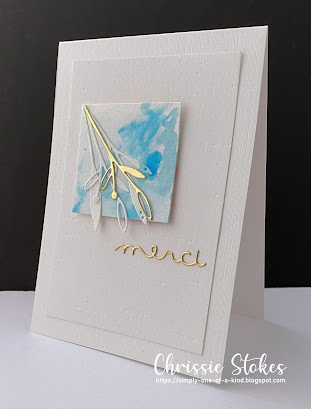 When I first started cardmaking, I was clueless as to styles and genres and it was only after I started my blog that I settled on my preferred style which is Clean and Simple. I bought all sorts of bits and bobs, and lots of the designer papers I bought have since been donated to a charity shop which has a craft section. I guess it took a period of experimentation to discover what really appealed to me. Now that the shops are opening up again following Lockdown, I shall probably be taking another contribution of stamps, dies and punches etc to the shop. I really need to de-clutter! I wish my room looked as clear as my cards!
For this one, I began by making a watercolour background, by splodging a little paint with some water on watercolour paper. I die cut a few delicate sprigs in plain white card and just one in gold. I wanted the sentiment to tie in with the other die cuts and so chose this one from Simply Graphic, a company in France (... hence the language). I think that the thickness of the lettering matches well with the delicacy of the stems. I don't remember the make of the foliage and I can't put my finger on the packaging either. I think that it is possibly Alexandra Renke.
Always Fun Challenges - Clean and Simple
Posted by Chrissie at 15:36 5 comments:

From our family to yours 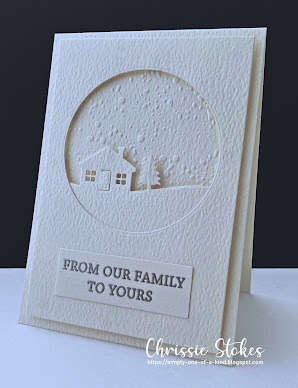 Here is a white on white, or should I say ivory on ivory card with just a little stamping. The house border die was a freebie from a mag and the background behind the circle was embossed with a Sheena Douglass EF.  The latter is sadly no longer available, but I feel sure that should they bring it back it would sell extremely well, if the number of enquiries I have had about it is anything to go by.
I fancied having the aperture cut with no impression of the die around it. My regular circle dies leave an embossed impression around the cut...even my Sizzix Framelits do this, although the circle itself is cut without an embossed border, the aperture part is left with the flattened edge. To get around this I used a circle aperture die which had some foliage in the centre, so I just cut it from both sides, turning the die through 180 degrees before the second pass.
The sentiment is from Memory Box, stamped and embossed in silver EP.
Merry Little Christmas - Anything Goes
Christmas Card Throwdown - Stamping 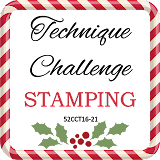 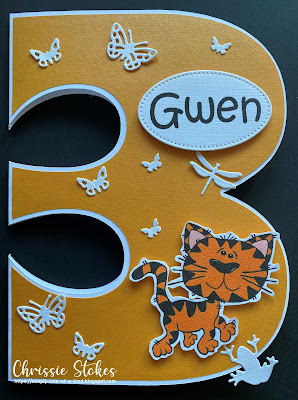 A friend recently asked me to make a birthday card for a little girl called Gwen who is going to be three. The only information given me was that she liked animals. Should be easy you say, and so it should but when one starts to overthink things, that's when the trouble starts. I got an idea into my head which didn't actually work out, but I could seem to get away from the fact that I wanted to use my Silhouette Portrait machine to make it. I did all sorts of things wrong... I'm not the world's greatest tech brain sadly! Anyway after several incarnations I finally ended up with this card shaped as a three! I chose this particular font as I thought that the straight bottom of the number would be good to let it stand up  squarely when opened. I found this cute tiger image and decided to use that, then added the bunch of flying creatures. The tiger is raised onto dimensional pads, but when I went to stand the card up the weight of the tiger lifted the bottom left corner of the card from the surface of the shelf. So I added the little frog die-cut to keep it propped up! It looks like he wants to be friends with the tiger!
I am entering it into the challenge at AAA Birthday 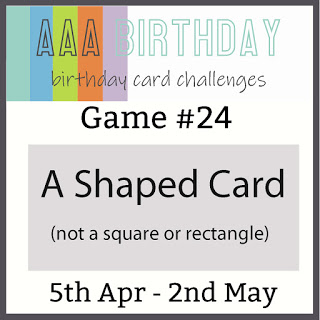 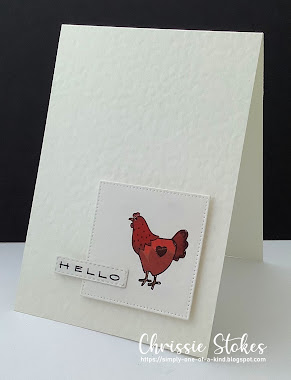 No cards for ages then 2 in one day!
Here is my contribution for the challenge at CAS Mix Up which this time is Paper Piecing! 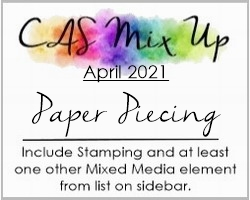 For this I used a chicken stamp from an Inky Doodles set.  I used to  buy from the designer at Craft shows at the NEC, but I don't seem to have been to one of those for a very long time! Although I've had it for years, I think that this is the first time that it has been used.
I stamped the image on to a piece of white card and then on to different areas on a piece of Christmas DP with poinsettias all over it! Even after carefully selecting the areas to stamp and cut out for the body of the hen, I still decided to darken the neck feather section a little more, using a marker. This image seemed quite appropriate for paper piecing as it is in three definite areas.
The sentiment is from Stampendous. A little sticking and die-cutting (I just had to shorten the sentiment cut a tad) and the card was done. I'm now about to set off for the tip to take all the packaging from our new kitchen tables and chairs, plus the old built in fridge from our last kitchen!
CASology Hello 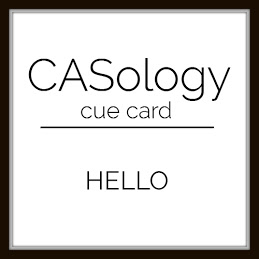 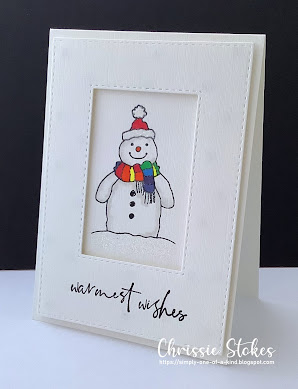 Here is a little card that I have been trying to make for days... but lots seemed to get in the way, fortunately I think I still have a couple of days before the challenge at CAS Christmas closes! 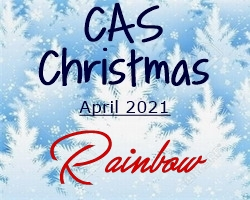 Trina set quite a challenge for this one, as rainbow colours are not usually associated with Christmas greetings,  but I think that this little chap (a stamp from Little Claire) seemed to lend himself to having a jolly scarf!
I added a little twinkle to his hat and the snow on the ground, and used Copics to colour in his scarf. The sentiment is from Memory Box.
Merry Little Christmas - Anything Goes
Some of you may know that we have been waiting to have a new kitchen for quite some time, experiencing delay after delay due to problems with Covid 19 restrictions and limitations. However it is now all completed so I thought you might like to have a gander at the end result. It is fairly similar in layout to the previous one, but with several innovations, the main one being making space for a big old American fridge... which I love!
To do this, the point where the internet cable entered the kitchen had to be re-sited, which led to variety of problems of one sort or another, but now all is well. We had a little cabinet constructed to house all the various hubs for internet, tv, security, heating etc which we were told should be in an open aspect and not in a cupboard because of signal etc, however, once in situ I couldn't cope with the look of all the wires etc, so my kitchen provider had a framed door made for me, which would normally have had glass in, but instead I fitted a piece of navy mesh into the glass space, to obscure the wires and hubs etc and yet didn't impede the signal.
Here are some pics. 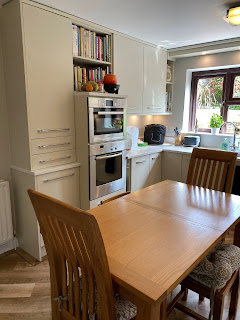 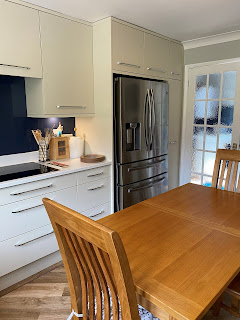 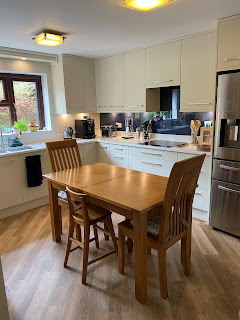 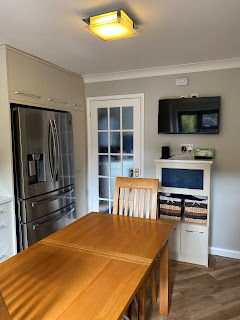 In this pic you can see the little cupboard under the tv where all the wires are semi-concealed! After the kitchen had been rewired and re-plastered, I did a count of all the sockets (outlets) ... there are 23! Six of them are in that little cupboard... 2 above it and one behind the tv. SO I have plenty left for the cookers, the toaster, kettle, coffee maker, Instant Pot, food mixer etc etc!
We are due to have our second vaccine tomorrow, so that will be another milestone!
Stay safe everyone!
Posted by Chrissie at 09:00 4 comments: 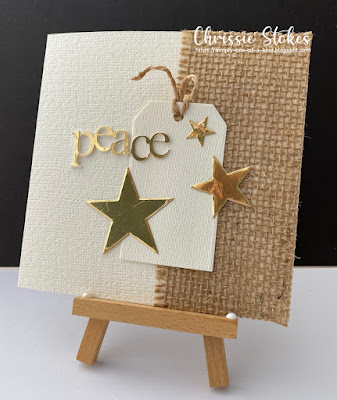 Just recently I was lucky enough to have a card selected as the winning entry into a challenge at
52 Christmas Card Throwdown
Their challenge this time  is this sketch. 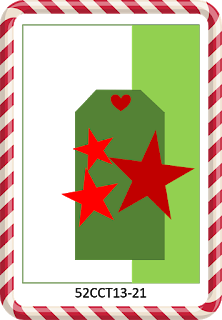 I decided to use a square card base rather than a rectangle and kept fairly close to the original design. Hessian and gold card seem a little far removed from each other, but I think that they team up reasonably well here. I wanted to to add the sentiment 'peace' but the dies I have with this word on were all too large so I decided to make it using my Silhouette Portrait,  cutting the word several times and stacking them to give a little more dimension. Looking at my card I think that the stars may have worked a little better slightly closer together... maybe next time!
I love making Christmas cards and this one is a little unusual!
Posted by Chrissie at 06:00 7 comments: 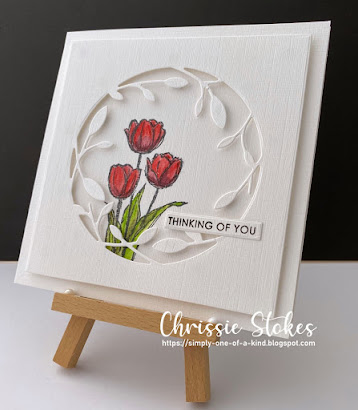 Downstairs there is a hive of industry as three chaps are on their knees laying my new floor through the hall, dining room and kitchen. I can't wait to be back to normal. Our living room looks like a furniture depository as we have crammed everything from the kitchen, hall and dining room into it! I can't wait to be using my new kitchen, there are just three more doors to arrive (I changed my mind about a couple of layout choices and so some new doors had to be ordered), apparently they have arrived in stock and can be fitted as soon as the floor men have finished!! Phil and I will be heaving a great sigh of relief that we have our house back to ourselves...
..but in the interim, my craft room is my escape!
Here is a card for the challenge at Just US Girls 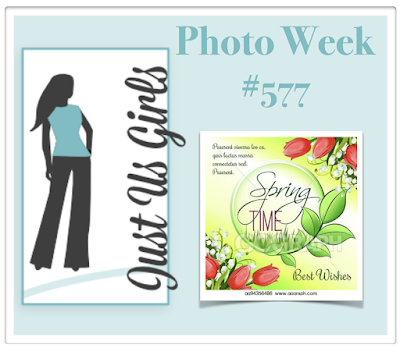 There is some amazing inspiration from the DT and I chose to use the tulips plus the circle of leaves as my starting point!
Time Out 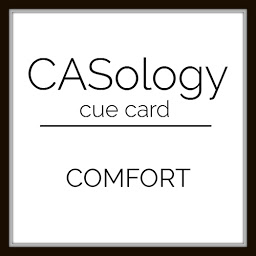 Hopefully we'll soon have our house back to ourselves! 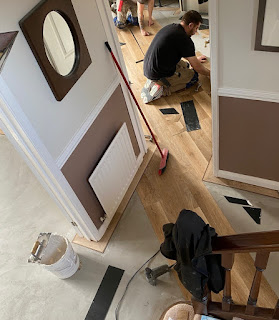