Yesterday was my birthday, today it's my son's, it will not be as jolly as we might have hoped, as this week he and his wife lost a baby at about 15 weeks gestation. It has been quite a difficult time for us all. 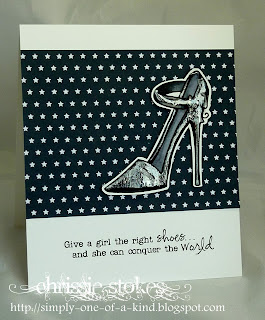 At  "Less is More" this week, we have an inspiration picture on which to base a card. It's this fab pair of killer heels !

Aren't they just something else!
If only I could actually wear something like them, but for me they truly would be killers!
My first card has an image from Bugaboo, coloured with Spectrum Noir pens and then glazed with Anita's 3D Gloss. I'm not sure of the origin of the DP, it's been in the drawer for quite some time, but it may be Pink Petticoat.
The sentiment, a saying attributed to Marilyn Monroe, was computer generated. After taking the picture, I added a panel dedicating this card to a friend for her 50th birthday, I think that it improved the layout somewhat. 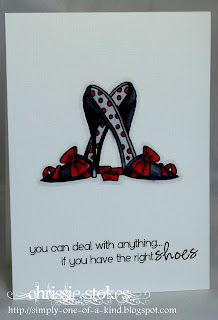 More Bugaboo here from the same set of images. Once more with a computer generated sentiment and coloured with alcohol pens. 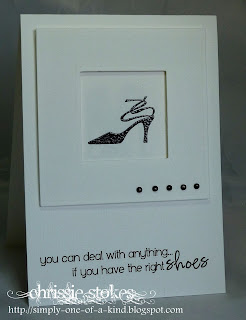 This one has a Hobby Art image, stamped and clear embossed then framed with a simple frame.
We have had Daisy our granddaughter staying this week in the first week of her school holidays. It seems impossible to think that she has already completed her first year in school, what a joy she is!
Have a good week everyone.
Posted by Chrissie at 08:00 22 comments:

Email ThisBlogThis!Share to TwitterShare to FacebookShare to Pinterest
Labels: Less is More, Shoes 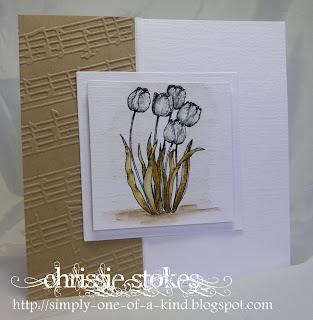 This is one of my favourite stamps from Blockhead stamps, unusually coloured here in white with kraft as its complement.
The challenge at ABC Challenges is to use both wet and dry embossing. Here the image was stamped in black and then clear embossed. The image was coloured with watercolours.
I think there's something quite soothing in the lack of vivid colours here.
As ever, I was influenced by Birgit a crafter of supreme talent!
Posted by Chrissie at 06:16 11 comments:

Email ThisBlogThis!Share to TwitterShare to FacebookShare to Pinterest
Labels: Embossing

The challenge at "Less is More" this week is to make a handmade flower.
There are so many ways of making flowers, it will be interesting to see what everyone comes up with! 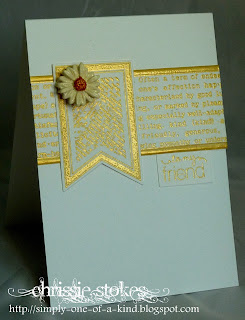 This daisy is made with embossing powder, melted in an aluminium dish  and formed in a silicone mould. Details of how and what are on the "Less is More" blog. They are quite fun to make. 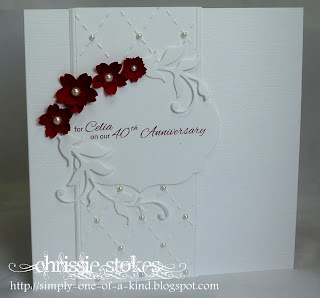 Here are some simple flowers made with a Woodware punch. It punches 5 different sized flowers in one go and these are simply shaped, layered and embellished with a pearl to make the flower centres.
The embossing folder is from Craft Concepts, the flourishes from Dienamics and the sentiment panel from a Stampin' Up Framelit. The sentiment is computer generated.
This weekend we have our 2 kids plus my daughter-in-law's Mum and sister coming for a family barbie. Should be fun!
I'm still trying to get the house straight following the decorator's visit!
Posted by Chrissie at 08:00 14 comments: 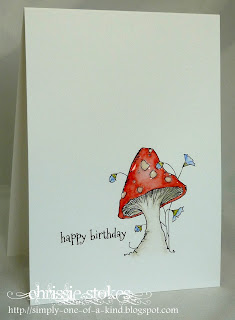 I love this little image from A Day for Daisies. The blooms are so delicate! I coloured it lightly and covered the top of the toadstool with Glossy Accents, which sadly don't show up too well on this picture.
The sentiment is computer generated.
Extremely CAS!
I had to drive to Bath early this morning following a text plea from my daughter who isn't feeling well and neither is my grandson. At least the traffic wasn't too bad at that time.
Seize the Birthday - Anything Goes 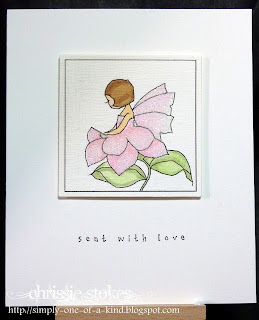 I made this card some time ago but didn't get around to blogging it, but it fits with  the challenge from a Day for Daisies to use a die-cut, so here it is now. The pretty image was gently coloured with Promarkers and twinkled with a little Glamour Dust. The image was then die-cut using a Nestie and popped on dimensional pads. The sentiment is from Hero Arts.
Posted by Chrissie at 10:14 13 comments:

One Layer with my new dies

When it comes to one layer cards, there are lots of ways to ring the changes and choosing a different shaped card base is one of them.
That's our challenge from Less is More this time.
At the craft show in Portsmouth a couple of weeks ago I bought a new set of Sizzix  hexagonal dies and it's one of these which I used to create these cards. 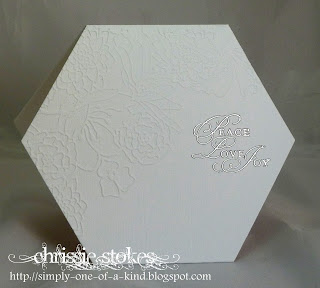 I'm sorry the picture isn't too good, I tried a few times to get it right but I'm no great photographer that's for sure.
The gorgeous embossing is from a Nellie's Choice folder called Flower Corner. The sentiment, embossed in silver is from Stampn' Up. 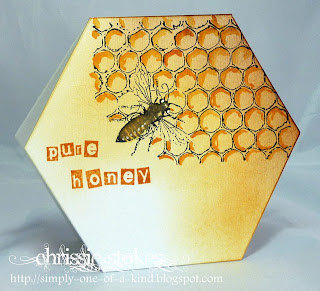 Here's the same die utilised to make the base, this time with some Blockhead stamps, stamped and coloured with Distress inks. I should have used these on the hexagonal challenge!
The men are coming to replace the ceiling in the dining room on Monday, so we have to clear the room as much as possible although a large French Dresser and the piano don't have anywhere that  they could be moved to! They're also going to decorate the hall stairs and landing so we are going to be in a bit of a pickle for most of the week.
Have a good one!

The first challenge of each month at "Less is More" is always a colour challenge.
This time we have chosen the topical title
50 Shades of Grey.
I haven't actually read any of the books although my daughter tells me that she did!!!!
My cards aren't exactly 50 shades but I rummaged through my paper and card scraps and came up with quite a few small pieces which could be die-cut. 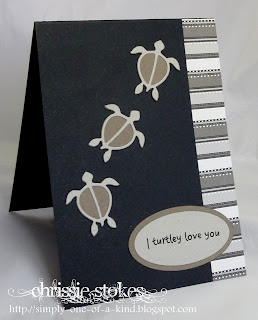 Memory Box turtles and I think it's Docraft paper, which has been sculling around for aeons! The sentiment is computer generated and it's all on a charcoal base. 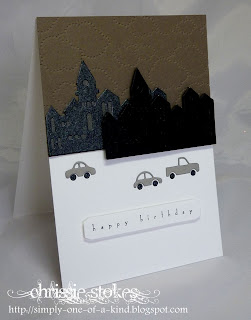 More die-cutting here.
The buildings are from a SavvyStamps die and the cars are Memory Box. The warm grey of the sky has been embossed with a Stampin' Up folder. The sentiment is from an SU set. 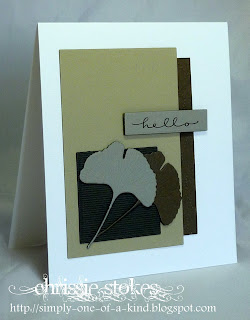 Once more the only thing which has been stamped is the sentiment. I can't decipher the origin of this clear set. The ginkgo leaf is a recent acquisition and I love it. It's from Impression Obsession!
Again various shades of grey amalgamated!
I think you should have fun with this one... lots of stamping techniques seem to cry out for it, but as I had just bought a whole bunch of new dies, I wanted to play with them!
Posted by Chrissie at 08:00 25 comments: 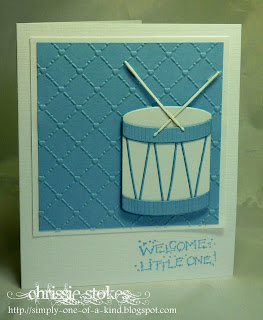 When I saw this Memory Box die, I really liked it but wasn't sure what occasions it could be used for. However I think that for either the birth or the birthday of a little chap it would be quite suitable. So here it is as a birth congratulations card.
The embossing is from a Creative Expressions Heart Lattice folder.The sentiment is a very old one bought second hand on ebay many moons ago, but I love it.
I used the sketch from Retro Sketches. 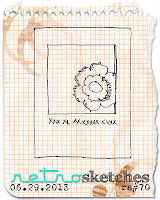 I'm just off to the shops... for a little retail therapy!
Posted by Chrissie at 10:09 3 comments:

A little bird told me... 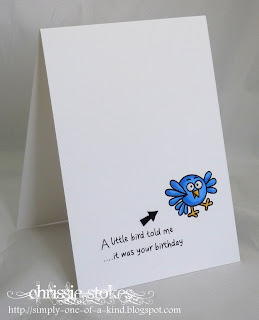 I shall have to work in silence soon... no I'm not in detention, but the piano tuner will be arriving... in fact I just heard the doorbell as I typed, he doesn't like any noise to distract him, I even had to put some WD40 on my husband's office chair as the squeaking put him off his work... and my husband does fidget!
Here is a little card for CAS-ual Friday's challenge this week which is to incorporate an arrow.
The sentiment was computer generated and the little bird (from Paper Smooches) was coloured with Copics.
The arrow was a tiny die-cut from my Cuttlebug Typewriter alphabet set of dies.

Speaking of dies, I got the bargain of the century at the Portsmouth craft show on Sunday. 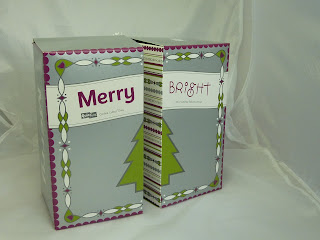 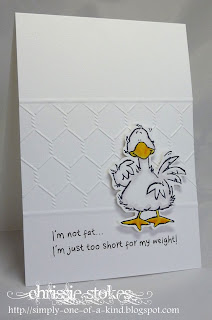 This card is very much in the vein of the one I posted yesterday, however when I saw Dawn French's post on Facebook with this sentiment I just had to make another card to use it.
This time I just embossed the centre section of the card, by replacing one of my Cuttlebug B plates for a couple of strips of thick cardboard under the band I wanted to emboss. I edged this with a couple of hand scored lines.
The image is unmistakeably Penny Black called 'Quack?', which I coloured with Spectrum Noir pens.
I added the sentiment directly to the cardstock using Dina's Handwriting font.

I used this sketch from CAS(e) this Sketch.
My version is certainly VERY CAS! 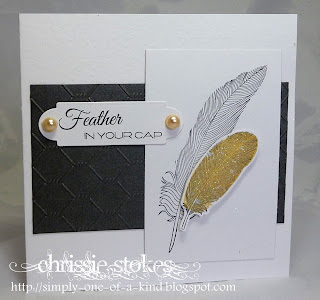 At Dynamic Duos the colours this week are Basic Grey plus a colour of our choice.
Here I have used So Saffron, with images and sentiment  from Clearly Besotted. Once more the embossing is from Cuttlebug's Chicken Wire EF.
In fact either card could be submitted for either challenge! 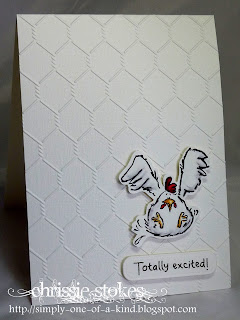 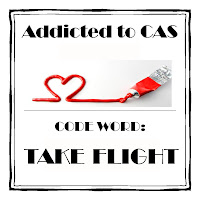