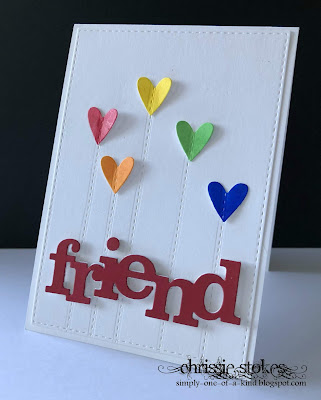 A card caught my eye this morning, doing exactly the job it was intended to do! It was a DT card for the challenge at The Card Concept
Here is the challenge

and this was the card which inspired me! 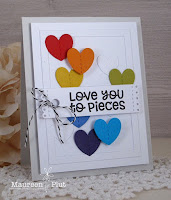 I didn't have any heart dies with 'stitching' so I used a stitched strip die to emboss the marks on both the card and the hearts.
I believe that the friend die can be obtained from Aliexpress.
Well speaking of friends... there's a friend of many out there called Di, of the famous Pixie's Playground where snippets are the focus of everything!
She has been running her challenge now for many a year and encourages us all to use up all those bits and bobs which would otherwise be tossed! I always have heaps as I never like to throw anything away.. hence the clutter in my craft room. All the little die cuts are from my snippets drawer!
I was lucky enough to meet Di IRL some time ago when Darnell was over this side of the pond for her famous English Tour! It was such fun actually meeting people face to face whom we have only known via the internet.
Darnell is doing a tribute Blog Hop for Di here, so do take a peek and join in the fun!
Long may your challenge continue Di!
Addicted to CAS - Friends 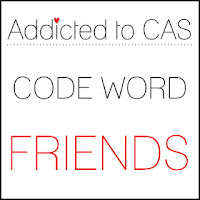 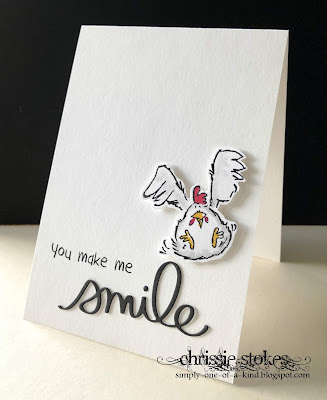 If you read my blog last week or thereabouts you may  recollect that I stamped and coloured a chicken and then promptly lost her. Rather than spend hours looking, I made another and hoped that the original would turn up.. well here she is! She was quite happily sitting on a pile of 'stuff' on the window ledge! I though she would be perfect for this sentiment.. she does make me smile.The smile die is from Mama Elephant and the rest is computer generated. The chicken is of course from Penny Black.
CASology Smile 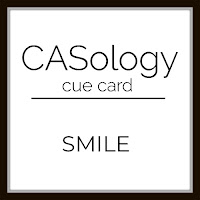 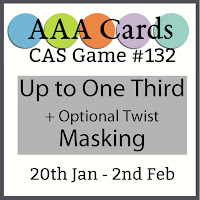 Crazy for CAS - Animal (I guess that a chicken is part of the animal kingdom!) 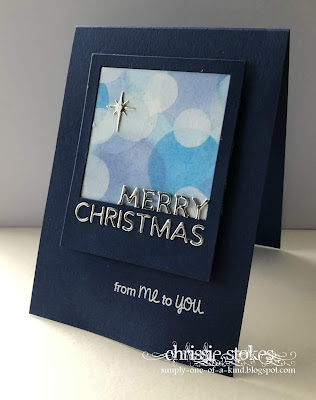 The Challenge at CAS Mix Up this time is to use the Bokeh technique. 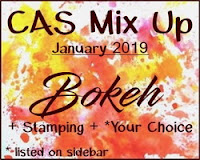 I have done this a few times before with mixed success, so this time I thought I'd try the technique using tissue paper as shown in one of the examples on the Mix Up Blog. My effort did not please me and ended up in the bin, so I reverted to another method this time using stencils, Distress inks and white acrylic paint. I was much more pleased with the result. I applied the colours through the stencils using both brushes and sponge daubers.  To make the stencil, I merely die cut a few circles from a piece of vellum. The star die is a freebie from a magazine and the frame from SSS. The stamped part of the sentiment is from Clearly Besotted.
Bokeh + Stamping + Die Cutting
It's also for the challenge at CAS Christmas Card Challenge. 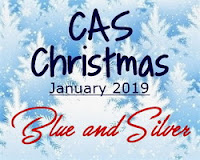 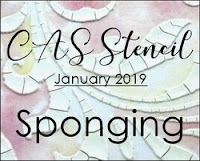 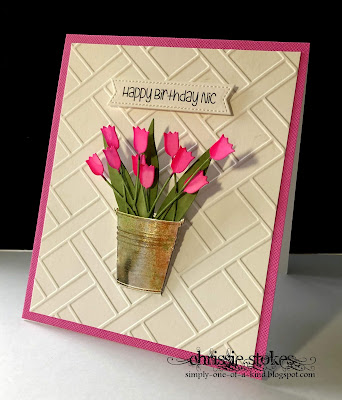 I just had one of those rare days when my idea for a card actually worked out... and I was pleased with the result.
A friend who has been requesting special cards for some time, asked me for a birthday card for his sister, for whom I have made many cards in the past. This always makes  thinking of something new rather tricky. In the end he requested some spring flowers. This time his sister will be 70 so he wanted that on there too, but somewhere unobtrusive!
This is what I came up with.
We have Memory Box tulips and bucket (minus the handle) with a new banner die which I bought recently, but have no idea of the make. I did have to shorten it slightly, by cutting from each end, moving the die in a little on the second cut, in order to  fit my computer generated sentiment.
The bucket was cut from silver mirri card and distressed with various dye inks rubbed on randomly!
I made a hinge in the front panel before embossing the  background. Don't remember the make of this folder either.
I cut out several of the tulip die and coloured them with alcohol pens. I stuck extra strong DST on the back of the bucket and arranged the flowers and leaves withing it. I then used another diecut to cover the back. The hole left when the hinge is open is covered by yet another bucket diecut and the number 70 placed behind the flowers. 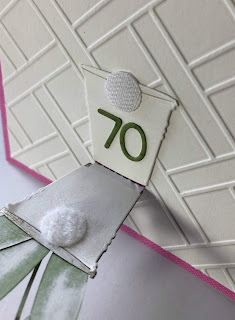 As the pot tended to flop forwards a little when the card was standing upright I added a self adhesive Velcro patch in order for it to be either open or closed as preferred.
The Card Concept #106 Pink Party 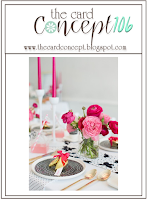 Dies R Us
#113 Something New (The Sentiment die)

2 Sisters on the Blog Numbers on the card!
Die Cut Divas Something New (The sentiment die)
Happy Little Stampers Anything Goes with Dies
The Flower Challenge Pink & Grey
Posted by Chrissie at 14:45 16 comments: 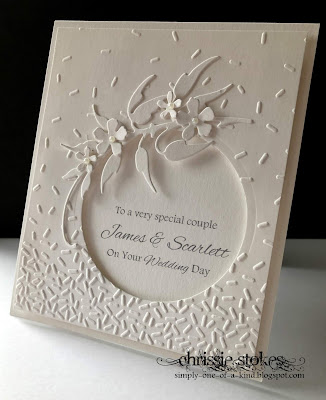 Some years ago one of my cards found its way to a lady in Northern Ireland and since that time she has contacted me to make personalised cards for many occasions for many of her family and friends.
This week was one such occasion... it started as a request for four cards, which turned into an additional two before they were posted off to her this morning. This is for one of the requests.
The way that I get the text onto the correct part of the card is all very technical... I have my Word program set to 105% zoom which makes it just about the same size as a sheet of A4, so using text boxes I put the words into the correct place by holding the front panel of the card with the aperture cut into it, over my screen and then move the text boxes around until the words fit behind the aperture! I'm sure there's a proper way of doing it, but it works for me.
CAS on Friday #149 Flowers
TIMEOUT 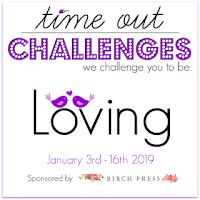 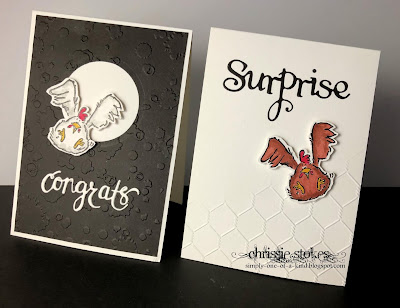 Here is a pair of cards for Darnell's Twofer Challenge which this time has to be birds!
Those who know me, know about my penchant for chickens... particularly the ones from Penny Black. Isn't this a fabulous image!
I stamped a couple of them and and coloured them, then promptly misplaced the white one, so having done a little tidy up looking for it, I gave in and stamped and coloured another! It may well turn up sometime when I least expect it! The Congrats is from Hero Arts and the 'Surprise' I believe is from Penny Black!
The black backdrop was embossed with a Sheena Douglass folder and the white card was partially embossed with a Cuttlebug folder. 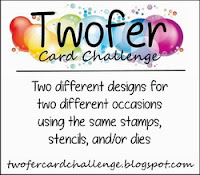 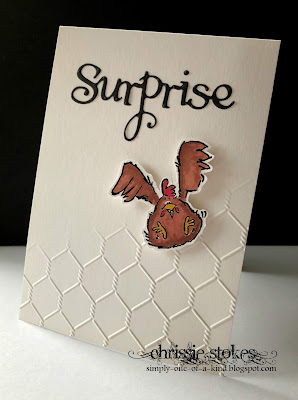 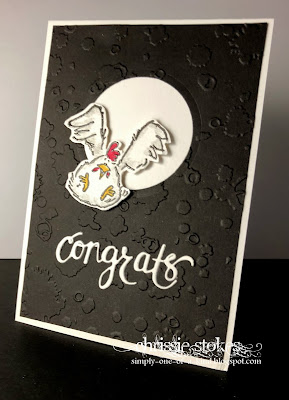 I recently discovered the fabulous voice of Josh Groban, so he is my crafting companion of choice at the moment... he's singing away on my phone... via my Bose speaker!
Posted by Chrissie at 17:12 12 comments: 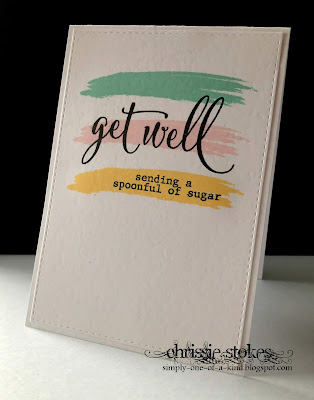 Here is a simple get well card, using just three stamps. The paint splodges are from MFT and the sentiment from Avery Elle. My littlest granddaughter loves Mary Poppins, so the additional bit of the sentiment was an easy choice.
I used the sketch and Optional Twist  from AAA cards 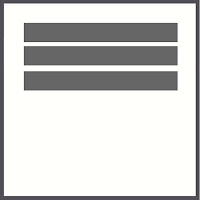 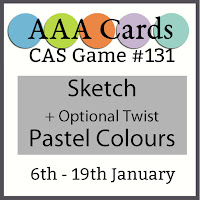 Email ThisBlogThis!Share to TwitterShare to FacebookShare to Pinterest
Labels: Get Well 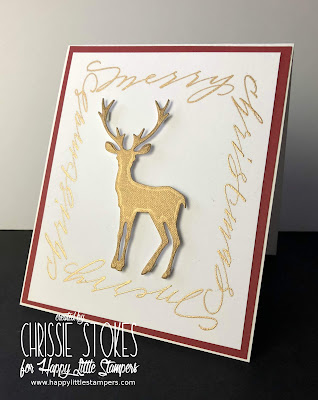 When I went to a Christmas card making workshop not too long ago, the sentiment stamp which I used here was available for one of the examples... it was also for sale at the end of the session and I simply loved it, so I bought it. I think it's really rather old. It's a wood mounted stamp which says DENAMI Design on the side with the date 1997. As I wanted to make a few cards using this stamp I decided to take it off the mount to use in my MISTI. After a short while in the microwave it came off really easily. I just love the flow of the script. The stag is from a Sizzix die, cut from a gold paper which matches the colour of the embossing powder really well, but it really too thin for using in a raised fashion like this. The answer was to stick it to some regular card before die cutting. I think this stag looks really majestic.
The Christmas Challenge at Happy Little Stampers  this time is Anything Goes with the option of using reindeer. 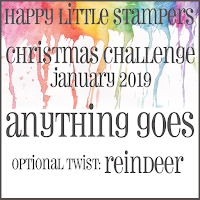 I must say that doing Christmas cards throughout 2018 was really helpful, especially as we went off for our cruise in mid December, so that's the plan for this year too... starting now!

This comes with all good wishes for the New Year to everyone who visits my blog... and thank you!
Posted by Chrissie at 20:00 7 comments: 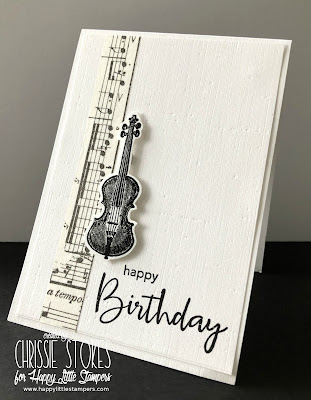 Happy New Year to you all!

As most of my cards are sold as a fund raiser for my choir and purchased by its members, the purchasers often like to have cards with a musical link or theme!
Here is one such, for the CAS Challenge at Happy Little Stampers 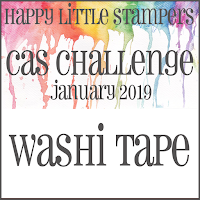 I added a little extra texture to the front panel with an embossing plate from Papertrey Ink, over which I added a strip of Tim Holtz Washi Tape. The violin was stamped with a very old stamp from Rubbadubbadoo, using Versafine Black Onyx ink and then clear embossed. It was cut out and mounted on dimensional pads.
The sentiment is from Simon Says Stamp.
We had a great holiday for our anniversary and came home straight into the celebrations for Christmas spent with our daughter and grandchildren.
We managed to find a rocking horse for our grandson... something which he has wanted for quite some time, but until this year my daughter didn't have space to house one, but having moved to a new property, we thought now was the time. Keeping him sequestered in the back of the car until Christmas morning was a challenge, but all was well!
He loves him! 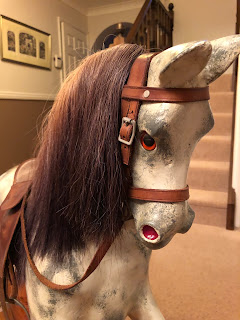