The Challenge at "Less is More" this week is to use a Sticker, Sticky Label or Peel Off!

When I first started crafting, I didn't have a die cutting machine and thought that Peel Offs were the Bee's Knees. I have to admit that over the years my opinion has changed but being a squirrel, I still have the odd supplies of them. Here I decided to use a few...but in disguise! 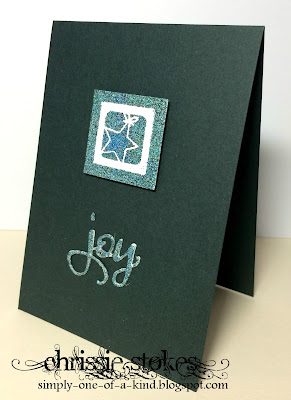 For this one I used a Peel Off of a snowflake within a frame, to act as a mask.
Having gently stuck it down, I inked the card with Versamark and heat embossed it with some WOW twinkly EP. I then removed the Peel off to re-use for a similar process.
The sentiment was die cut and then inked and embossed similarly. 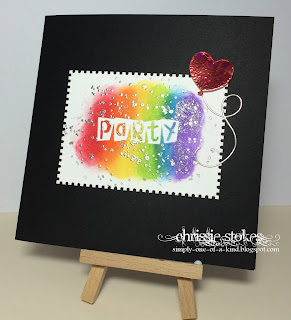 Again I used a Peel Off as a mask and inked a rainbow of colours using sponge daubers. I then stamped a few random dots over the top and embossed in silver, finally removing the Peel Off.
The balloon was die cut using holographic wrapping paper attached to a piece of card for stiffening. The string is from a Memory Box thread die. This postage style rectangle is also from a Memory Box die. 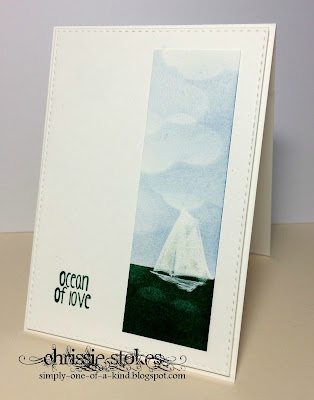 For this final one I once more used a Peel Off as a mask. As the sails were open, I masked that area within the Peel Off with Elmers Rubber Cement, then inked the sky with a Blending brush over a die cut cloud which I moved around as I was inking. The sea was also applied with a blending brush. When dry I rubbed off the cement.
The sentiment is from Paper Smooches.
I don't think I could have used the Peel Off in its original state...what was I thinking when I bought this sheet! 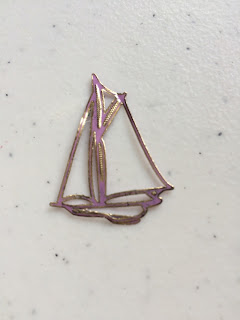 I can't see me using a lilac and gold Peel Off an any project anytime soon (not as is anyway)!

Email ThisBlogThis!Share to TwitterShare to FacebookShare to Pinterest
Labels: Less is More, Masking 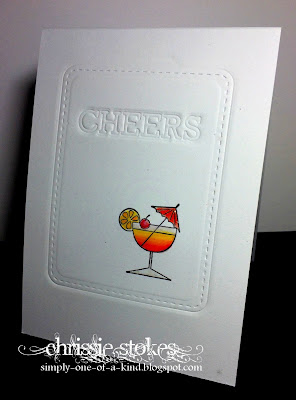 I tried to make this look like a tequila sunrise... I somehow associate fancy, colourful cocktails with exotic places as I like to try new ones when I go on cruises to warmer climes! I shall have to wait until January before the next one...cruise not cocktail that is!
Here is  one layer card with dry embossed frame and sentiment, a simply stamped and clear embossed image coloured with watercolour pencils, blended with a water brush and given a coat of Glossy Accents. 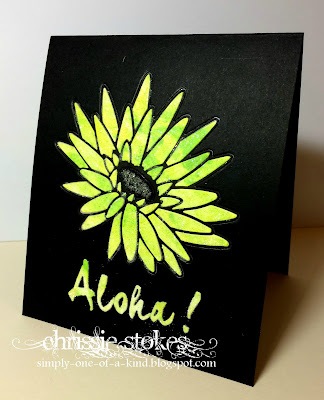 This rather exotic looking, showy flower was made from a pair of dies from Memory Box... it's quite a whopper!
It was cut from card coloured with the shaving foam technique and then inlaid. The centre was cut from black card and encrusted with Micro beads set into Glossy Accents. The sentiment was cut from an alphabet from PTI and all the coloured card was gentle twinkled with Glamour Dust although it doesn't show up much on this picture.
Aloha!
Posted by Chrissie at 08:00 14 comments:

Email ThisBlogThis!Share to TwitterShare to FacebookShare to Pinterest
Labels: Dry embossing, Less is More, One Layer 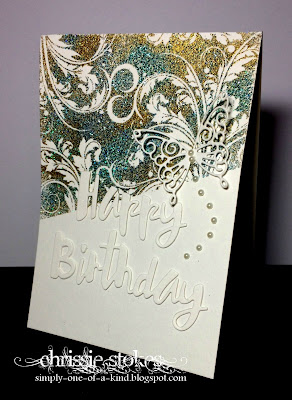 For this card I used a blending method which might not immediately spring to mind,... I blended a variety of embossing powders  over this negative flourish stamp from WOW.
It's so simple to do, really effective and a great way of using some powders that may not look their best alone! Lots look really good accompanied with a little gold or silver.
The butterfly is from SSS as is the sentiment!
It's actually the card I made for one of my LIM teamies Sarah G!
It's also for the challenge at AAA Cards 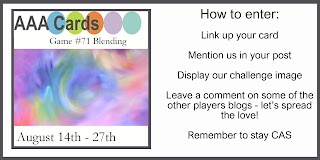 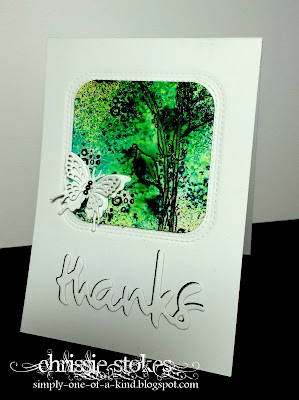 Since attending the Happy Little Stampers retreat in Swindon a few weeks ago, my interest in Brushos has been rekindled. Although I had bought a set of them, they had remained practically unused, but now they are having a renaissance!
This card was made from part of an unsuccessful piece of experimentation, but a panel cut from the original piece looked good enough to use! The stamps are from PolkaDoodles, clear embossed and I shook and spritzed various shades  of Brushos over the stamping!
The sentiment is from Stamplorations, layered in black and white, the butterflies are from SSS and All Occasion Dies.
It's for CAS Mix Up Challenge 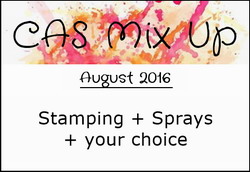 Music has always been a large part of my life and so consequently we seem to have lots of musical friends. One such has a birthday about now and he is a composer, singer, brass player, teacher  and conductor amongst other This is the card I made for him. 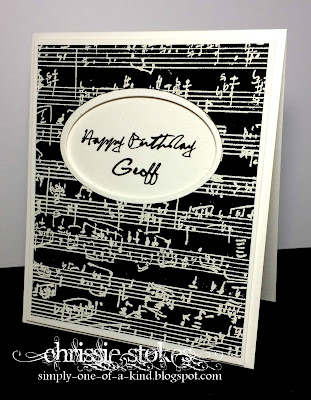 I simply used an Impression Obsession cover the page stamp which I stamped onto black card and embossed with white EP. I then cut some apertures and mounted the computer generated sentiment in the space. I tried to choose a font which reflected the hand drawn nature of the manuscript.
Simples! 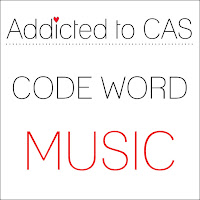 It's also for the challenge at Addicted to CAS. Although not really a lot of white space, the design is as simple as simple can be! 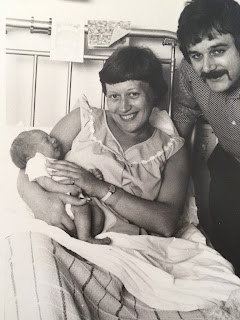 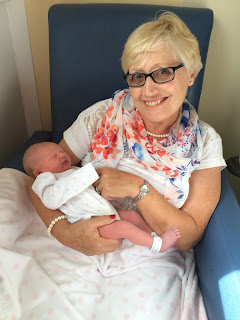 A long awaited 3rd grandchild has arrived!
It seems that my method of holding a baby hasn't changed in the 40 years which separate these two pictures.
The one in colour shows me proudly holding Cleo, my son's new and much beloved baby daughter and the much older version shows the new daddy when he himself was brand new!
I was struck by how alike the two poses are... the angle of my head, the tilt of the shoulders, one hand holding a little leg and the other on the tummy... the broad smiles look pretty similar too!
Proud moments all round! 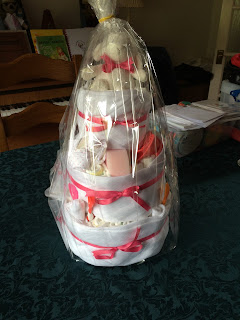 This is the nappy cake I made for her...  I hope the contents will come in handy!

A little French one layer! 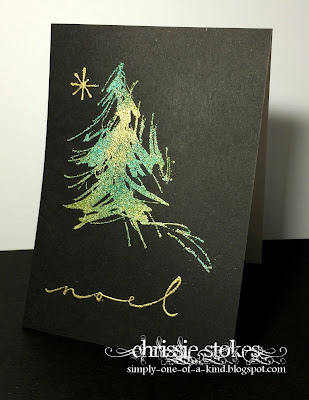 Here I used a couple of Penny Back stamps and stamped using Versamark and then added embossing powders in a variety of shades and textures without shaking off the excess between each addition. I used WOW powders in Verdigris, Copper, Gold, Pepper and Green. 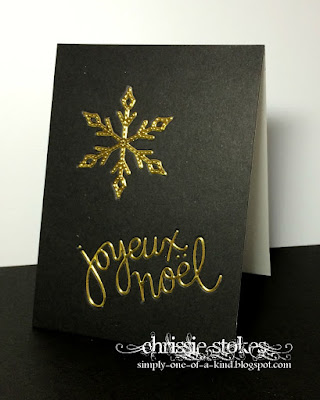 Some time ago we had a bit of a debate at "Less is More" about whether inlaid dies count as one layer or not!
The general consensus was that it's OK so here is an inlaid card using a sentiment from SSS and a stitched snowflake die from Memory Box!
The challenge at "Less is More" this week is for a one layer card with the theme French, so I've gone along with French Christmas for both cards! 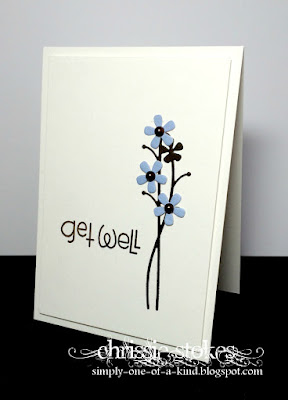 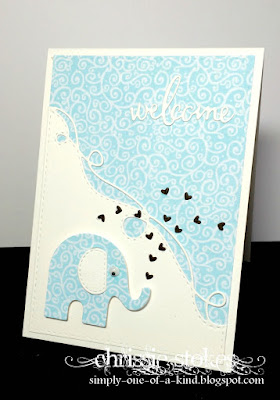 This one is not quite so clean and simple having a layered base but the elephant (Memory Box) is standing in a little white space!
I love this Penny Black border die... the paper is just a snippet  from the scrap drawer, which I think is from Cuddly Buddly. The sentiment is from Penny Black too.
The challenge this week from Less is More is a colour one and those chosen are blue and brown, a lovely combo I think!
Posted by Chrissie at 08:00 15 comments:

Email ThisBlogThis!Share to TwitterShare to FacebookShare to Pinterest
Labels: Die Cuts, Get Well, Less is More 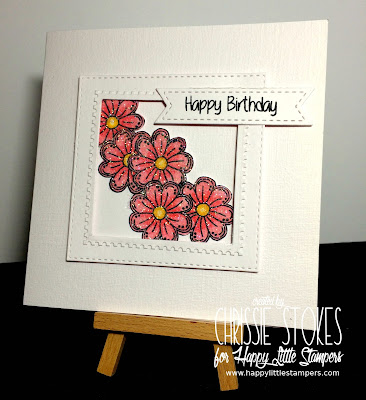 Th CAS challenge at Happy Little Stampers this month is to use masking!
Here I used a flower from HLS Doodled flowers, stamped and masked several times. It was coloured with a few Spectrum Noir pens and gently twinkled with Glamour Dust. The frame was cut with dies from Memory Box, SSS and Spellbinders. The sentiment is from HLS Butterfly birthday 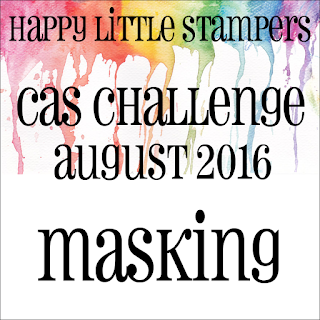 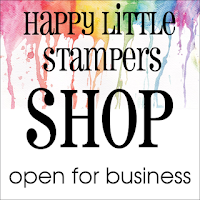 Tutorials:
One Layer Scenery by Ingrid Blackburn (10:22)
Quick and Easy Masking Technique by Unifyhandmade (6:13)
Masking and stamping a Christmas Tree by Kylie Purtell (6:42)
Masking and Ink Blending by Juhi K (8:11)
Masking and colouring on Black Cardstock by Kylie Purtell (4:59)
Why not join in  with this fun technique, there are a few videos  here to give you some ideas!

Back from the HLS Craft Retreat 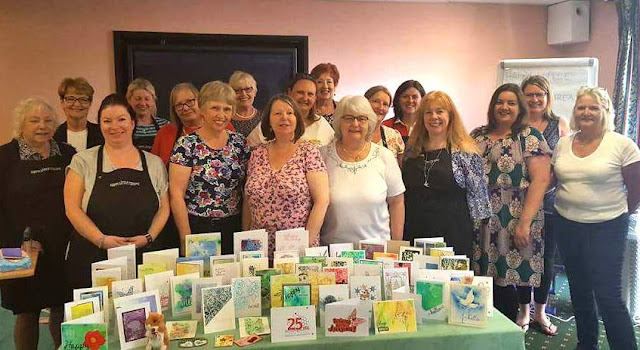 At the weekend, I went to Swindon for the Happy Little Stampers first Craft retreat organised by  Kylie, their head honcho.... from Australia!
How she managed to do this from the other side of the world is nothing short of amazing, but the whole weekend went smoothly with a great time had by all!
Here you may spot some familiar faces...  Anne (ex DT from Less is More) and Sarah, Anita and myself as current incumbents.
A very famous face amongst us is the inimitable Darnell from California, can you spot her? and Melissa (Honey Bee Lane) who drove up from Germany with her family to be there!
The table displays the cards we made collectively... we were working with Brusho for much of the time and it was really fun! 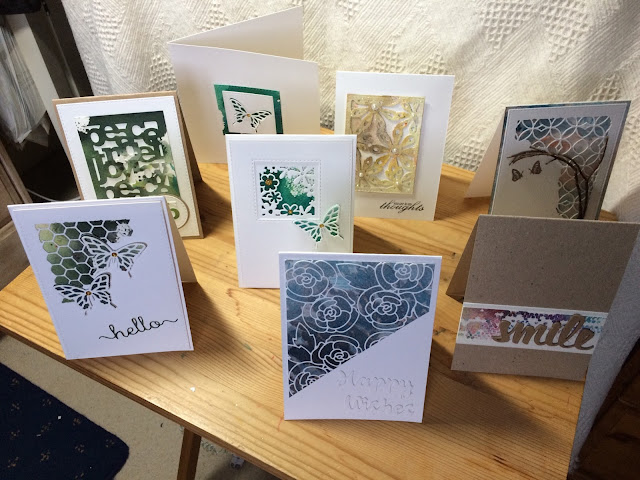 Here are most of the ones that I made. We did a lot of sharing of resources, which was great fun in itself, but I think that there have been quite a few purchases as a result of doing this!
Darnell was crowned  Miss USA, but graciously let me borrow her regalia! 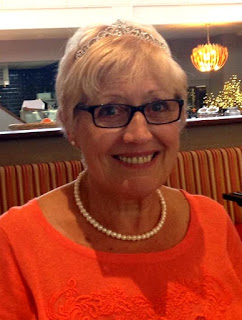