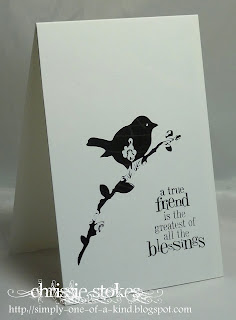 I saw this technique over on the CASE Study blog and loved what I saw there.
It also struck me a s a fabulous way to use up some of the mountains of DP I have sitting in drawers in my craft room.
The file for this dear little bird is from Silhouette Online and the paper from a Paper Cellar stack I've had for yonks. The paper is simply placed behind the aperture which has been cut out.
The sentiment is from Penny Black. 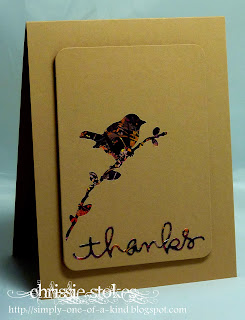 Here is the same file used on a slightly differently proportioned card base, with a sentiment die cut from  Simon Says Stamp die.   I think this stack is from Basic Grey. .. it's so long since I used it. I'm not sure, but there are some fabulous papers in this one.
Posted by Chrissie at 11:23 5 comments: 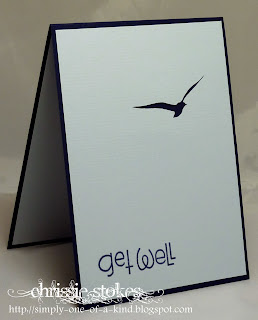 At Less is More the challenge for the next two weeks is to simply pick a favourite challenge from any of the 150 previous challenges as a theme for your card.
Here I used week 107 Up in the Air.
It's simply a seagull cut using my Silhouette and mounted over a dark cardstock. The sentiment is from Paper Smooches. 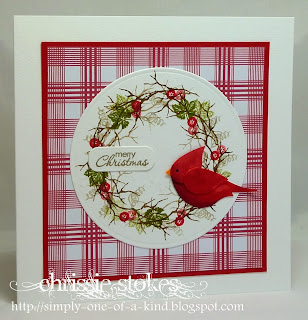 Week 147 here... a Christmas card incorporating a bird. This cardinal is made from the SU punch using a second 'wing' section to create the crest. The wreath stamps are from Cardio.
It could also be for Week 146 to use Designer paper in a CAS way. 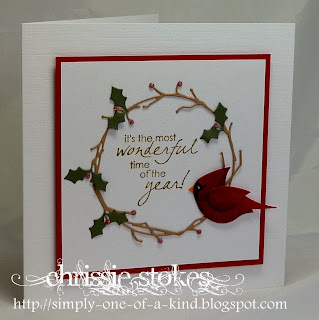 I prefer how I have shaded the cardinal on this one, The dies used were from Memory Box. The sentiment is from Penny Black. 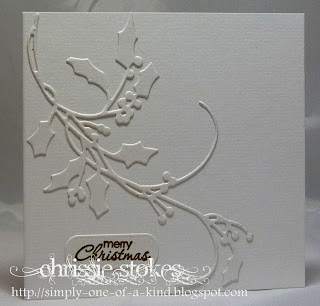 Here is Week 140 White on White Christmas!
A Penny Black die-cut teamed with a Stampin' Up sentiment.
We hope that everyone will have fun choosing their favourite challenges for this one... enough to fill in any spare moment over the Christmas period.
DO have a happy one!
Posted by Chrissie at 08:00 11 comments:

Today is our Ruby Wedding Anniversary and we were thrilled  by a surprise party organised by our two wonderful kids. It was shared by friends and family, some of whom had travelled some distance to be there. What a joy it was to be surrounded by these wonderful people...we are indeed blessed!
Our daughter is just peeking over my shoulder, she really kept this one quiet!
Thank you everyone!

Tomorrow is my 40th Wedding Anniversary! What a milestone..and I have a new stone too.. a very pretty ruby ring to mark the occasion!
This was what made me think of the first card for the Less is More Challenge this week... the subject is the Twelve Days of Christmas and it also has to be a One Layer Card. 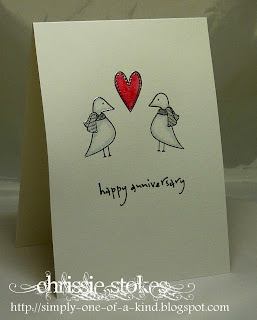 The stamps are from Inky Doodles, I think they're so cute. Actually I will be giving this one to some friends whose anniversary is a couple of days after ours and with whom we usually have a celebratory meal each year. 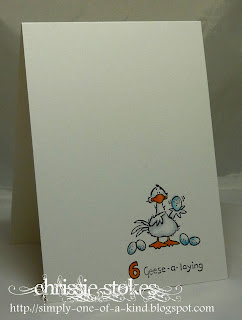 This one uses the Penny Black's Transparent set of the Twelve Days of Christmas. The images are such fun!
My Christmas tree has been used for most of the 40 years of our marriage... this is in fact its 37th year. It was bought in 1976, in Alexandria, Virginia, when we were living there and has been used every Christmas since then. I think that rates value for money!
Here it is! 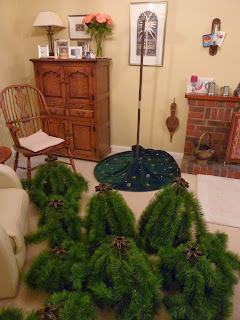 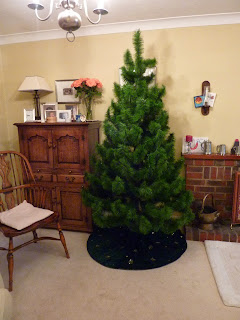 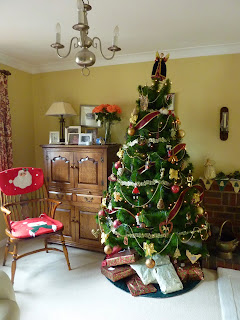 There are a few new ornaments on it this year, a little ceramic bell from Finland, a cuckoo clock and a wooden Christmas tree from Germany and a little warrior from Estonia. I write the year and the place where they were bought on each one and have a great time each Christmas taking them out and remembering many lovely holidays!
Santa's chair is waiting for him beside the cocktail cabinet... he may just want a wee dram when he comes... I guess my husband could always drink it for him if he doesn't want to be tiddly in charge of reindeer!
Have a good week!
Posted by Chrissie at 08:00 15 comments:

Email ThisBlogThis!Share to TwitterShare to FacebookShare to Pinterest
Labels: Christmas, Less is More, One Layer 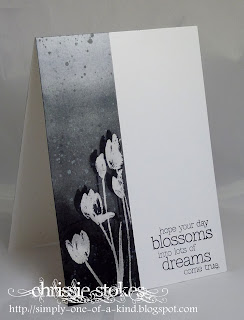 There 's a new challenge over at the Craft Stamper Magazine Blog.
This time it's to use the OMBRE technique. I believe that this means a gradual change of colour throughout the card. I chose to work with shades of grey.
The stamps are from Penny Black.
I merely masked a section of the card and then clear embossed the flowers before adding areas of colour using both sponge daubers and ink duster brushes.
When I was happy with the shading, I shadow stamped the image again using a deep grey. To add just a little interest I stamped some splatters from the SU Gorgeous Grunge set in white and shades of grey.
I removed any ink from the white flowers with a tissue to allow the colour to pop.
The sentiment completed the card.
Why not give this challenge a try! 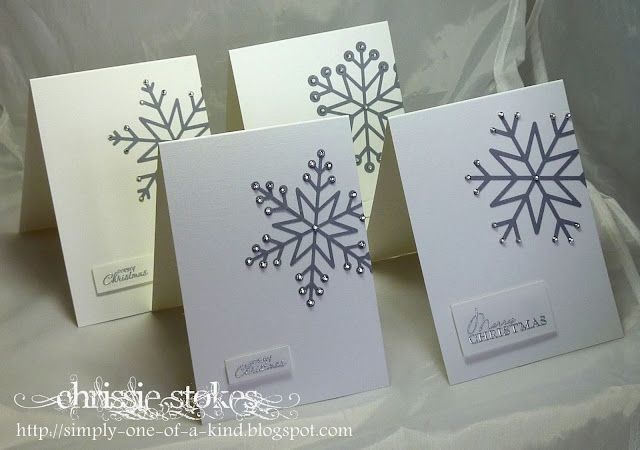 Here is a set of cards made really quickly using my Silhouette and some free cutting files from Birds Cards.
Simple stamped and silver embossed sentiments from Stampin' Up and a touch of bling added to snowflakes cut from silver textured paper.
Easy Peasy!
Addicted to CAS Snowflakes 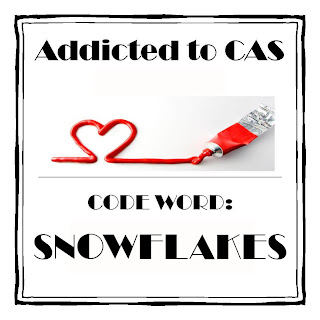 We're off to sing carols soon, so I'd better get my skates on!

Email ThisBlogThis!Share to TwitterShare to FacebookShare to Pinterest
Labels: Christmas

A touch of metallic! 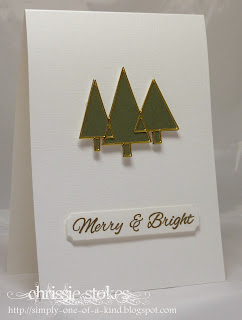 Sometimes it's the simplest of cards which I find the most pleasing! This one took only moments to make and yet I find this kind of design really satisfying... a couple of die-cuts and a sentiment on a raised panel!
The colour challenge at "Less is More " is for something metallic plus one other colour. The metallic elements here are a scrap of gold mirri card and some gold embossing.
It's also for
CASual Friday - Out on a limb 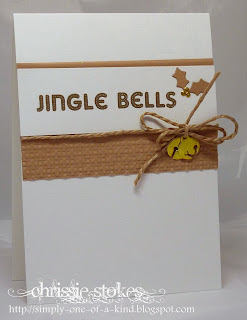 The gold embossed sentiment doesn't show up well on this card, but I really like the mix of gold and the kraft elements  here. I love my new jingle bell die from Memory box,  it means I can have the look of them without the bulk of real jingle bell charms. 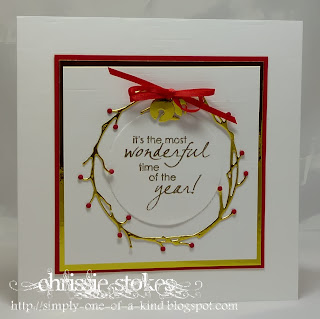 It would have been better if the sentiment was stamped on the same piece of card as the wreath in this one, but I didn't think about using a sentiment in that position until I had added the embellishments, so by I then couldn't fit the wood mounted stamp accurately in the centre... you know the rest!

I was called to Bath to look after my grandson who has developed chicken pox for a second time. He had a very mild version some weeks ago and the doctor warned that he might get it a second time. He's really covered this time. Poor little chap.
Tomorrow we will be singing carols at a local Victorian farm in Upper Hamble country park. It was the venue for the Wartime Farm, a TV series which was broadcast last year. The group of singers, who are all friends will be coming back to me for lunch, so today I shall be doing a lot of preparation for that!
I hope everyone has a great weekend.
Posted by Chrissie at 08:00 14 comments: