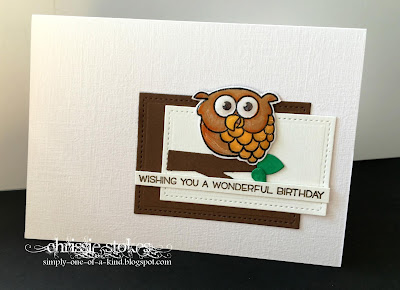 Here is a quick post for a card for a couple of challenges.
Just Us Girls ... with this inspiration 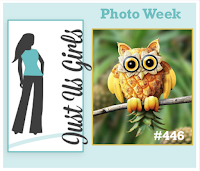 ...and Freshly Made Sketches with this Sketch 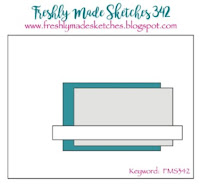 The Owl is from Paper Smooches, coloured with Promarkers and glazed with Glossy Accents and the sentiment, stitched rectangles and the tree branch from Lawn Fawn.
Posted by Chrissie at 16:53 5 comments:

Email ThisBlogThis!Share to TwitterShare to FacebookShare to Pinterest
Labels: Birthday 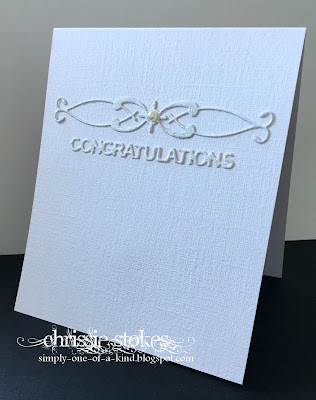 A simple congratulations card, suitable for Engagement, Wedding or Anniversary.
I think the scroll is from Memory Box and I'm unsure of the origin of the sentiment. Both were gently twinkled with Glamour dust and a pearl added to the centre of the scroll.
It's from the sketch at CAS(E) this Sketch. 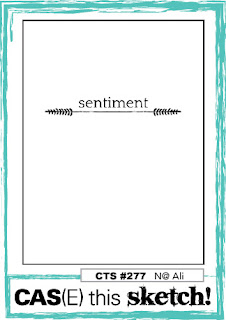 I put my sentiment beneath the scroll as it looked better balanced in this position on my card. 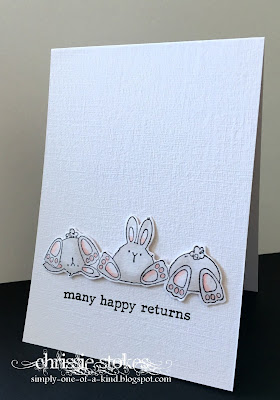 This is another card with practically the same layout, with the elements a little lower on the card. It's for the challenge at CASology with the theme Jumpy. 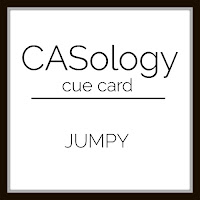 I think rabbits jump don't you! The image is from Stamping Bella and the sentiment from Clearly Besotted. 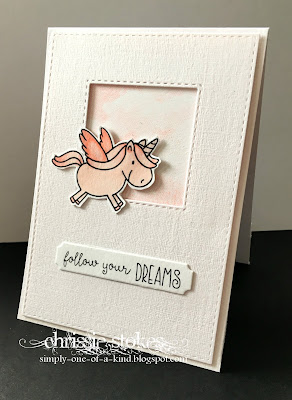 I love this little unicorn from Jane's Doodles. It's a really simple card for the challenge at CAS on Sunday or Friday as the case may be!
The challenge is in the form of Tic Tac Toe 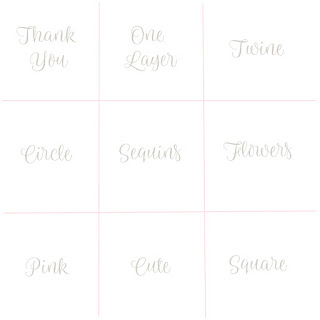 I have chosen Pink, Cute and Square from along the bottom row.
The dies are from Simon Says Stamp and the sky background stamp (not that you can see much of it) is from Impression Obsessions. 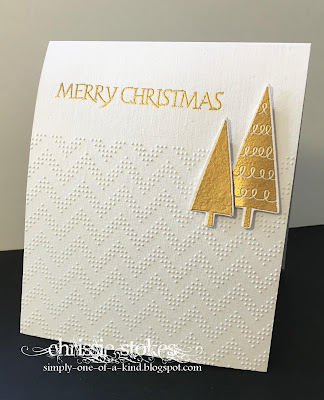 A simple card for a couple of challenges 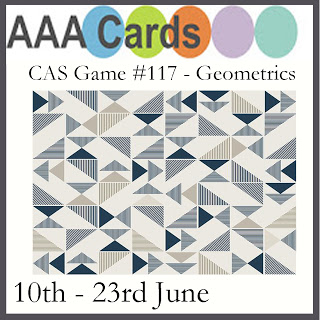 The zig zag dry embossing and the shape of the trees are all somewhat geometric.
The trees are Hero Arts and the dry embossing is from Cuttlebug. The sentiment is from a set by Hero Arts
It's also for the Masculine card challenge at CAS Christmas challenge 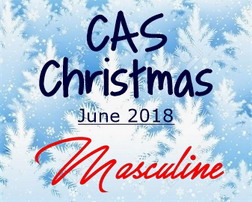 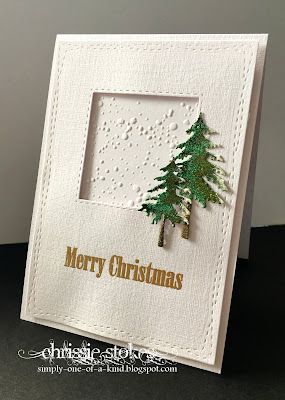 The challenge over at CAS Christmas  is to make a card suitable for a chap.

Here I began by die cutting a couple of fir trees and inking the trunks with Versamark. I sprinkled  a little distress embossing powder over them and heat set. then I inked the rest of the trees and randomly added embossing powder in two shades of green, plus some verdigris powder.
I then inked just the right hand side of the trees and added some sea foam white powder, hopefully to give the impression of snow.
These were stuck to a front panel (Creative Dies wonky stitched frame) of the card beside a square aperture  (SSS die) through which a little dry embossed snow (Sheena Douglass EF) can be seen.
The sentiment was stamped and heat embossed in Gold! 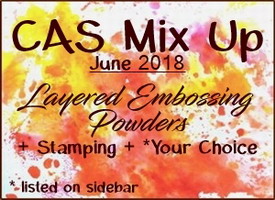 It's also for the challenge at CAS Mix Up this time.
Here we have the layered embossing powders, stamping, dry embossing and die cutting.
Looking at where I positioned the trees, it looks as though I should have put the 'snow' on the left side of the trees, or put them on the other side of the aperture! I may change them over!
Posted by Chrissie at 07:07 11 comments: 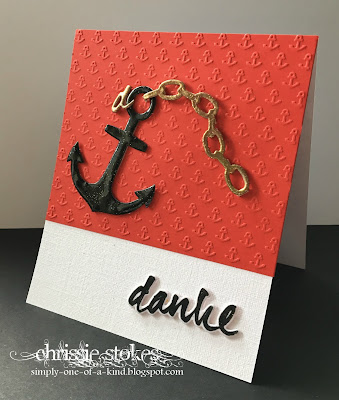 Recently we visited Germany with my choir to sing Vaughan William's Sea Symphony, together with some German choirs.
It was a wonderful trip and we made lots of new acquaintances and renewed some old ones. One of the latter was a lady whom I stood next to in the concert we gave 15 years ago on a previous visit to Osterode. It was strange how we remembered each other after such a long time.
She had decided to come to England to hear the performance we were giving of the symphony on our return. In fact she wanted to sing with us and that was also arranged.
I offered to pick her up from the airport and offer some hospitality and in appreciation of this she made this beautiful painted silk scarf. It's really rather clever how she incorporated our choir logo into the corner of the scarf. 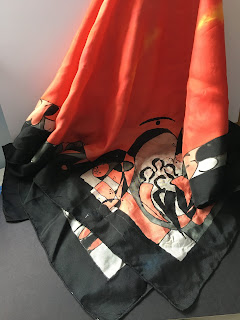 This is the card I made for her to thank her for such a thoughtful and creative gift.
As we were singing the Sea Symphony I thought that the anchor would be an appropriate image and after adding the chain I tried to make a play on words and added one link in the form of a letter 'd' so when read 'd'anchor would sound like the German for thank you!
It's the colours of our choir too... Red and black and here I added a little gold too. 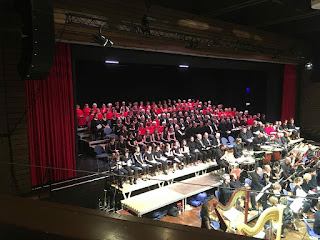 This is a picture of the combined choirs in Osterode.

The anchor and chain are from Creative dies and the Danke sentiment from Mama Elephant.
It's for the challenge at Just US Girls 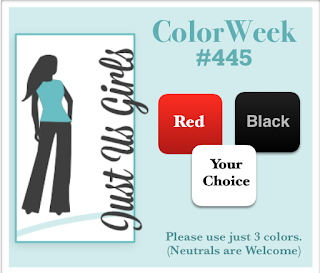 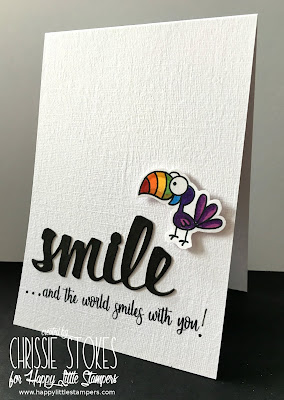 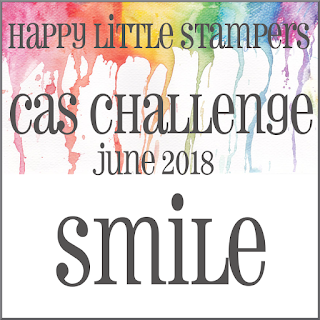 Our winner for this challenge will receive a $20 coupon to spend at the shop! Check out all the details HERE.

IF YOU USE STAMPS BY HAPPY LITTLE STAMPERS AND YOU ARE OUR RANDOM WINNER, YOUR PRIZE WILL BE DOUBLED!

I thought that this little Toucan from Paper Smooches looked as though he had a smile on his beak so I thought he would be perfect for this card.
I used a Lil' Inkers die cut for the word smile and wrote the rest of the sentiment on the computer using the font Sweet Hipster, which I think complements the die rather well.
The bird was coloured with Copics and simply cut out and mounted on dimensional pads.
I think it's really interesting how hard it is not to smile when someone smiles at you... love it!
Posted by Chrissie at 21:00 7 comments: