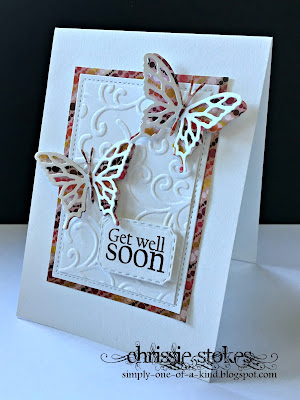 When I saw that  the challenge at CASual Fridays was to use patterned paper, I was delighted to think that I could use some of the stacks of patterned paper which have been sitting in my drawers for years.
When I first starting crafting, I tried everything... all styles, all genres... until I realised that my own particular style was clean and simple! By then I had accumulated heaps of stuff, now obsolete in my craft room.
Here I used Sizzix butterflies and a Sizzix embossing folder with a sentiment which was a freebie from a magazine I believe. The bodies of the butterflies are from a Memory Box die.
It's still possible to keep things CAS even with patterned paper in the mix!
Posted by Chrissie at 09:28 4 comments:

Email ThisBlogThis!Share to TwitterShare to FacebookShare to Pinterest
Labels: Die Cuts, Get Well 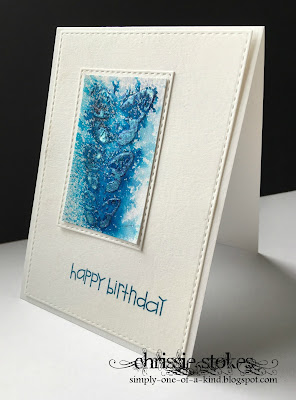 Since attending the Happy  Little Stamper's Craft retreat last year, I have really become a Brusho convert!
This card is a bit of an experiment and I had fun doing it.
I began by applying some White Pearlescent Embossing Paste through a stencil and then having removed the stencil, tapped some Brusho colours onto the wet paste. It began to react a little but I fancied a little more impact so I spritzed it with water and blotted it a little. 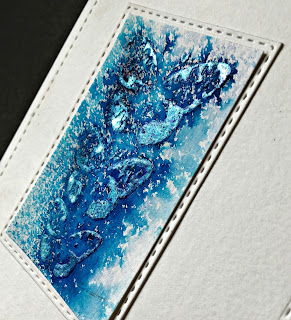 The pearlescence shows through the colours and I rather like the effect!
The sentiment is from Paper Smooches, stamped in SU Pacific Point ink.
I'm submitting this card to two challenges
CAS Mix Up  (my additional  choice is die-cutting) and Just us Girls 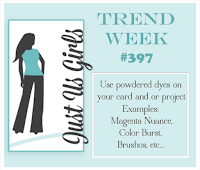 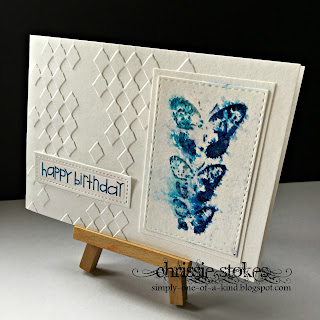 Here is another using a similar technique, although this time I cleaned the stencil and put it back over the embossed images before adding the Brusho pigments. The pearlescence didn't show as much so I brushed a little Perfect Pearls over the butterflies and then decided to do a little spritzing as well.
The dry embossing is from a Cuttlebug folder.
Do you have a preference? 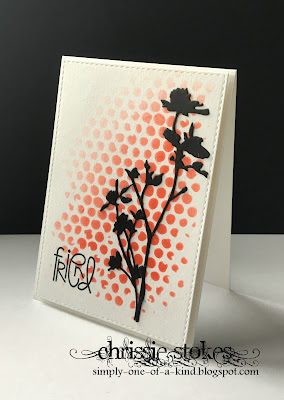 I was just browsing a few blogs when a card from my fabulous friend Anita, jumped out at me. It's her inspiration card for MUSE and what an inspiration it is, I think it's absolutely stunning.
So this is my attempt!
I used a Tim Holtz stencil and brushed some Candied Apple Distress ink through it. I simply added some Sizzix flower die-cuts and stamped a one word sentiment from Paper Smooches. The front panel, cut with a SSS stitched rectangle and elongated a tad to fit a British card size, was popped up on dimensional pads. 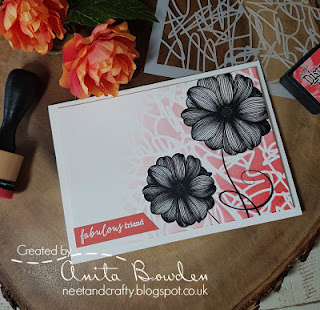 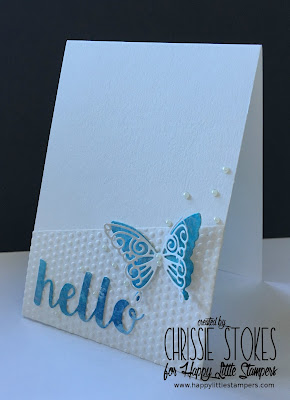 The challenge at Happy Little Stampers CAS challenge this time is to use one of my all time favourite techniques... smooshing!

Once you have created your smooshed  card it can be used for a variety of purposes. Here I chose to die cut the card for both the focal point (the butterfly, a die from Simon Says Stamp) and the hellosentiment (from MFT). 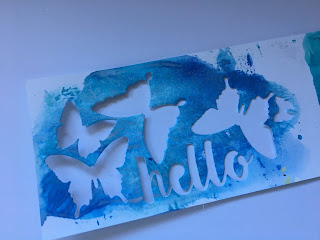 Here is the smooshed card from which I cut the elements for this card.
I began by putting a small amount of Platinum Inka Gold paste  onto a craft mat and then added various shades of blue Aqua Tints, before spritzing with water to combine the colours. I then took several prints from this using fairly absorbent card. You can see that this particular piece has been used for more than one project. 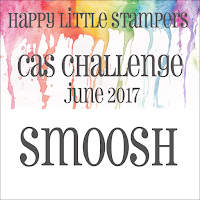 Our winner for this challenge will receive a $20 coupon to spend at the shop! Check out all the details HERE. 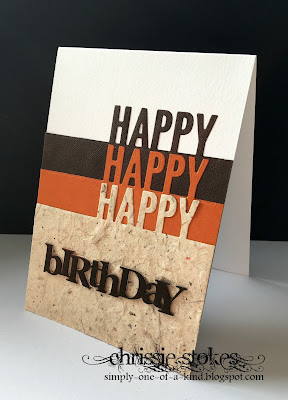 Here's a quick card made today using a die I've had for some time, but I'm not sure that it's been used before.
I chose some colours suitable for a chap and used the theme of Repetition from CAS on Sunday. plus the Male Room's die cutting criterion. 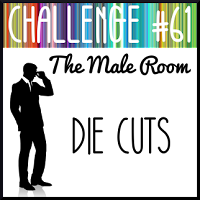 Sadly I can't find the make of the Happy die at present, but the birthday diecut which I layered using the four colours used in this card, is from Papertrey Ink.
I did toy with the idea of adding a little die cut image somewhere, but as yet haven't found with the perfect die or the perfect place to put it..so for the moment I'm leaving it as is
Posted by Chrissie at 18:00 3 comments: