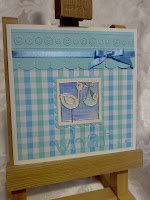 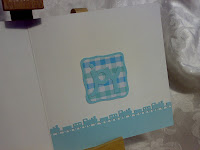 This was SO tricky!
For a while I was at a total loss as to WHAT to do for this Challenge!
Then I had a text from a friend of mine to say that she had become a grandmother for the third time and this time it was a boy. What Joy!
So that is what my card became... a congratulations card for her, and what joy it is for her to have a grandson after having two gorgeous granddaughters.
I'm not sure if this fulfils the sentiment exactly, but it is a card I needed and so that is reason enough.
I had to do an 'inside' for this one, something I don't normally do, but the 'what' meant nothing without the 'joy' which follows!!
I have used my new Martha Stewart punch from Secret Crafters, plus another (the train on the inside) which I have had for a while.
I love the soft colours of this card. The paper is from Canon, a free download. The image is from Hero Arts, mounted on Nesties. The lettering is Cuttlebug 'You're not the boss of me' and the 'joy ' die is from Sizzix.
I think that's it!