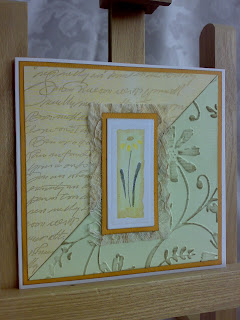 I haven't decided what sentiment I want to put on this card as yet, but I can add one whenever.
There are lots of new things here. The daisy stamp arrived today. It's one of those that prints the background and then you have to colour in the blank spaces afterwards. I haven't actually had one quite like this before. I think there must be quite a knack to doing it as I had several attempts at trying to do it before I was even vaguely satisfied.
I haven't used this fabric/textured paper which is behind the image before, although it has been in the drawer for a couple of years. I quite like the effect on this card.
The 2 papers have been altered slightly. The green has been embossed with Cuttlebug flowers and inked with gold. The yellow which is a new paper from K & Co., (also in today's parcel), I overstamped with the gold script. This stamp also arrived today. It was quite exciting playing with all the goodies. I think everything was bought on sale from ArtyMiss!