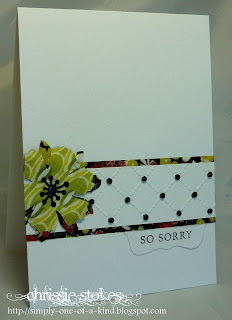 This is the challenge at Fusion this week.

I went with this paper which was free in a mag, which I thought in the same vein as that from Lesley's challenge and the sketch follows that from Jackie.
I used an embossing folder from Creative Expressions which I bought at Ally Pally. It is in fact A4 size and this is just a snippet from it. Having added the gems to the intersections there was no room for the SU sentiment, so this was added as an appendix on a Papermania die-cut and slipped under the horizontal band.
The flowers are from Sizzix Movers and Shapers Tattered Florals, with a punched centre.
Isn't it wonderful to see a little sun this week!
Would you believe it I've missed this deadline too... that's the second this week, I really should be more organised!