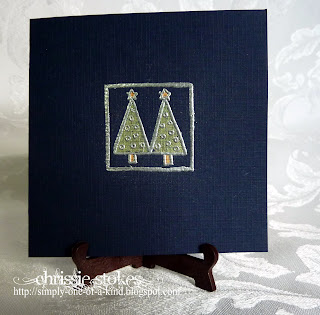 The One Layer Wednesday has moved location for a few weeks and can be found here, hosted  for a short time by Jennifer, thanks so much Jennifer!
Her challenge is to make a winter card, using any colour cardstock other than white, cream, red or green.
Here I've gone with navy blue and heat embossed the image in silver which I then coloured with Perfect Pearls, using a water brush.
Today I made a whole bunch of place cards for a dinner I'm attending on Wednesday. I put the menu choice for each person on the back, so that serving staff wouldn't spend forever trying to find out who had ordered what. (Because of the numbers involved all the food has been pre-ordered.)
Now I have a question for you!
Is there a way to invert text in Word 2007?
Obviously, if typed  normally, the bit of text which is to be on the back of the card would be upside down when the place card is folded. I couldn't work out how to invert text, so I had to do it on a separate piece of card and make a feature of it. I tried using a text box,  but the box rotated and the text stayed where it was. I tried with a call out but that was the same. I think I tried Word Art, but I can't remember what happened with that one.
A friend had some software which he said would do the trick, but he didn't have it handy!
Hey Ho!
PS I have now sorted my problem, I did it in Word Art and changed the shape to be straight and then popped the whole thing into a text box so I could put it where I wanted once I had inverted it!
I don't know why I couldn't do it this morning!
Posted by Chrissie at 16:03

Email ThisBlogThis!Share to TwitterShare to FacebookShare to Pinterest
Labels: One Layer