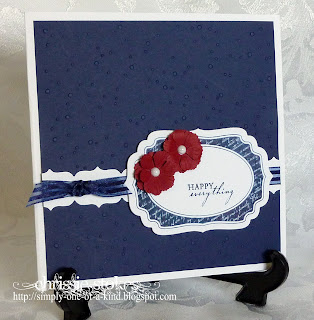 Here's another DT card.This time for My Time to Craft.
I suppose we could have chosen any nation's flag, but being patriotic, I chose our own... which incidentally is the same for many other nations too!
I have used a Waltzing Mouse stamp which matches my Nesties Labels as the main feature of this card and I think that the Fiskars Upper Crest Punch ties in well with this particular design of die.
I embossed the background paper with Cuttlebug's Random Dots folder, which is great as it can be extended easily to cover a greater area. The sentiment is from  a new set from Hero Arts and the flowers were made with a Nellie Snellen Cut and Emboss Duo. I coloured the ribbon to match the card with one of my Copics.
Another carload of junk went to the dump yesterday and the loft is gradually emptying, but there's a long way to go and the men are coming to re-insulate on Friday. Will we... won't we ... get it sorted in time?
Posted by Chrissie at 08:10