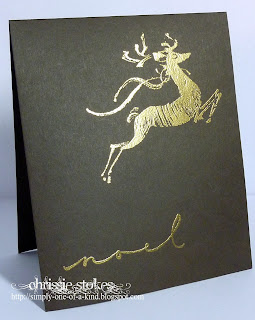 The more I do it, the more I like it... Clean and Simple that is!
A card couldn't be much simpler than this... One image and one sentiment that's it. Both are from Penny Black and both have been heat embossed in gold.
I like how the sweep of the 'l' in the sentiment echoes the shape of the reindeer's front legs. This lovely stamp was one of my acquisitions from the NEC recently.
It's my DT card for My Time to Craft  this week where the challenge is Reindeer Greetings.
It's great that the snow has disappeared, it's lovely to look at but causes such problems. Some friends had a car crash into their garage wall while they were in bed in the room above. It has had to be propped up and needs to be repaired very soon., They were lucky that the whole building didn't collapse. Some other neighbours around the corner have had their front garden wall smashed down by another car out of control on the slippery roads. My neighbour opposite, (the one on the right of the two houses on my snowy day picture a few posts back) lost traction on his drive and his new BMW slid along his fence leaving a long scratch down the side of the car.
Penny Black - Stamp on any colour but white
One Layer Wednesday - What first inspired you in stamping... Heat embossing! What magic!
Posted by Chrissie at 06:30