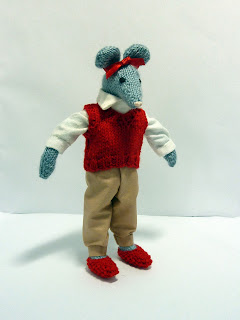 Well Miss Mouse is now nearly done!
She needs whiskers but I don't know what to use to make them. Maybe fishing line? Then I'd have to secure them firmly, so I'll keep thinking about that one.
I made the shirt and trousers by adapting a 30 year old action man pattern. The pullover I just made up as I went along. It's actually my second attempt as I didn't allow enough space to put the neckband in, so I just started again and  made the top part longer.
The shoes were also just made up as I went along. I was quite pleased how it all turned out.
She's standing all by herself... clever isn't she!
I spent last night sorting out my sewing box in an attempt to find my transparent poppers (press studs). I have thrown out a waste basketful of  rubbish and feel really pleased that I actually found what I was looking for a the bottom of the box.
You can't actually see her tail in this picture, maybe I'll take another so you can see that too.
Let's hope Daisy likes her!
Posted by Chrissie at 10:50