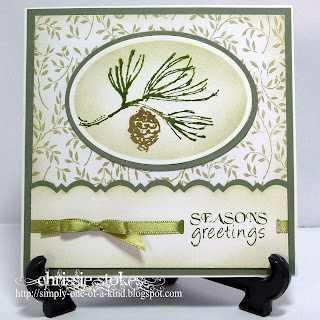 I have had a few problems with trying to make my ideas work out recently, lots of stuff has ended either in the bin or lying around unfinished. I did just about manage to get this one done however. It's just as well as it's my DT card for the Creative Card Crew Challenge this week, sponsored by One Stop Card Crafts and Doodle Pantry. Check out the challenge blog for great prize details. This is to be my last card on that team as I have decided to step down.
I made the backing paper using a Rollagraph Tiny Leaves wheel with SU Mellow Moss ink. The image is from Artemio, which I partly inked with Stazon Olive Green, leaving the cone to be inked with Versafine.
After stamping I embossed the cone detail with gold embossing powder. When it had been die-cut, I sponged it with Mellow Moss ink, whilst still in the die to leave a white border.
The sentiment is part of a Papermania clear stamp which I chopped up and the panel is edged with a Martha Stewart border punch. I punched out a couple of ribbon slits so that the ribbon could be threaded behind the sentiment. I tied the ribbon using my bowmaker but tying the last wrap around the flat piece of ribbon which I had already attached to the card, making it look as though it is an actual fastening!
I love this image and I think that the sentiment style suits it quite well!
Sweet Stampin Challenge - Make your own backing paper
Crafty Catz - Happy New Year
Alphabet Challenge - Foliage
Posted by Chrissie at 07:34