Yesterday was a really busy day for me. I was madly trying to finish my commission for a wedding which is to take place on October 3rd. The bride decided at the last moment that she would like Favour Tags as well as making a late decision on Menus. SO I had plenty to do. I'll post a pic of the things later.
The other thing which took a little time yesterday was a 50th Birthday party. My husband assured me he knew the address, but had written it down one digit out! Instead of 63 he had written 62. In the ordinary way this should not present too much of a problem, as neighbours would probably know one another. However, these two houses were on the same road which was divided into two separate parts by the A3M!
We eventually found the address he'd written down (which was in the difficult to find detached part of the road) and the lady there was most helpful, inviting me in to look at the phone book and the internet to see if that would help. Finally we drove home, got the correct address (which we had passed several times looking for the wrong one) and drove back and arrived 2 hours late! It was very pleasant after that!

On to cards.
Two from 365 Cards, the sketch from yesterday, the colour inspiration for today. 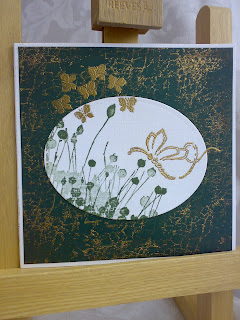 This is a Penny Black image with a Unity Stamps dragonfly and Laura Ashley butterflies. These have been heat embossed in gold together with my favourite crackle background from Crafty Individuals. 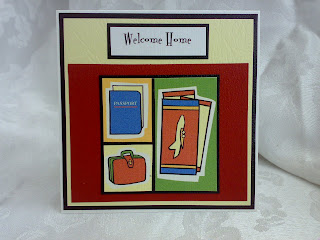 This Welcome Home card is for a friend to send to a client for whom she booked a rather nice vacation. She wanted them to know that their holiday enjoyment was important to her too!
Posted by Chrissie at 08:14