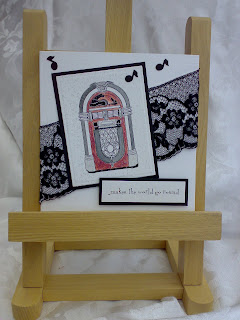 For today's card at 365 Cards the theme is Musical Monday, based on the song Chantilly Lace by the Big Bopper.
A juke box came to mind and so with the lace and the quote, which is a line from the song, '...makes the world go round', my card was done.
I went to the Christening of my niece's son yesterday, which took place in Bray in Berkshire. When shaking hands with the vicar after the service, the folk song, the 'Vicar of Bray' jumped into my mind and I spent the rest of the day trying to remember the last 2 lines of the first verse. I don't think I've sung it since I was a teenager so it's not surprising I couldn't remember all the words. The vicar couldn't help me out either, but he did remind me of the chorus. Apparently all the words are up on the wall in the local pub, we didn't go in there, but I looked them up in my folk song book when I got home! 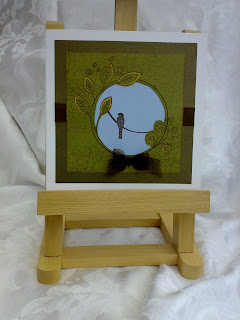 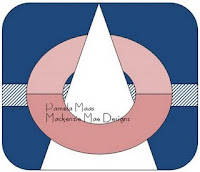 Anyone looking at this card together with the sketch on which is was based for 365 Cards Super Sketchy Sunday, will need a healthy imagination to see any correlation between the two. However it's also for the Cuttlebug Spot - For the Birds.
I found it fiendishly difficult to think of anything that vaguely resembled the original and my meanderings led me to this card.
The aperture is the circley shape, the bottom of the bow is the triangly shape and there is a length of ribbon running from side to side to imitate the central part of the sketch.
I rest my case!
Posted by Chrissie at 08:49