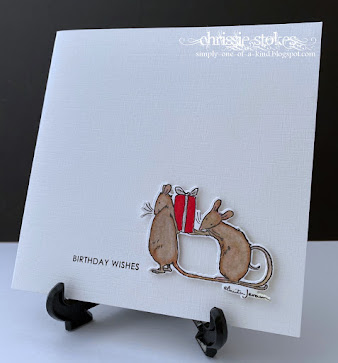 I was lucky enough to have one of my cards chosen as the CAS Perfectionist at Addicted to CAS. 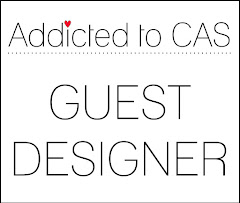 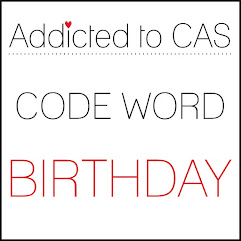 I don't know if any of you know the stories of Little Nut Brown Hare in the 'Guess How Much I Love You' series, but Anita Jeram, the illustrator, has designed lots of stamps for the Colorado Craft Company. The one I have used here, plus its matching die are from that collection!
I simply coloured the image with alcohol markers, die cut it and mounted it on dimensional pads. I say alcohol markers as I have to use a cross section of makes lately, as I have many different brands... Copic, Promarkers, Chameleon, Spectrum Noir, Mirage ... to name a few, but as I have had them all for quite some considerable time, many are drying up and so certain shades are missing, so I just mix and match where I can! I imagine that some time I will need to just throw out the lot and start from scratch! I probably would have done it sooner if markers were not so expensive.
The tiny sentiment is from Sugar Peas Designs.
Although I have a MISTI, I bought a Vaessen stamping platform some time ago which I actually prefer, as it is a little more versatile. It automatically adjusts to different thicknesses of stamps as the cover is spring loaded and it doesn't have a well or recess as the MISTI does, so an opened out card will fit into it, or rather will extend beyond the edges without getting creased!
I have been using a Scor-Pal to crease my cards, (which I cut from A4 sheets of card) for many years and is now becoming rather beaten up. I thought I would try the Vaessen version for a change as I was so pleased with the stamp platform, but stupidly ordered the imperial version instead of the decimal one, so I'll have a trip to the post office later to send that back. The proper version for me should arrive tomorrow. For some reason the imperial version was cheaper, which is probably what caught my eye rather than the dimensions!
Thanks once more to Kylie for allowing me to join in the fun with this challenge!
Posted by Chrissie at 08:00