Back at "Less is More" 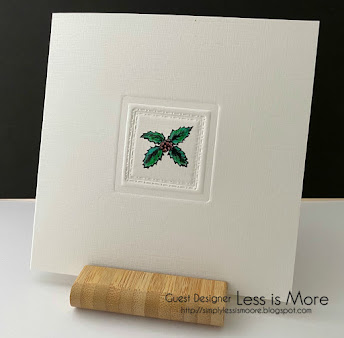 I was so delighted to have had a card selected as the winner in the challenge blog which I created with Mandi many moons ago! I'm speaking of course, of "Less is More".  It is some years now since I stepped down from running the challenge, but am happy to see that the the current designers are continuing with our original concept... albeit tweaked a little to keep up with the times!
The outcome of my win was a request to return as a Guest Designer for one of the challenges.
When we began "Less is More", clean and simple was not a well known genre and many people found white space really scary! Since LIM's inception, CAS has become much more prevalent and there are some amazing exponents of the style around, the DT at LIM being a case in point. 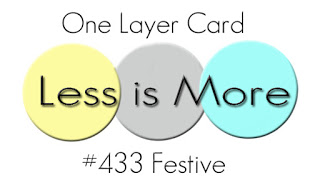 The theme this time is Festive.
For my card I began by taking two, double dot/dash squares and dry embossing them, one the right way up and the other upside down, so that I got one dot/dash edge and one flat edge embossed in the centre of the card. I then stamped the image, which is a freebie from a Crafts Beautiful Mag, which was generously bought for me by my son's mother-in-law. I coloured it with Inktense pencils and blended with a water brush. This type of colouring doesn't show through onto the inside of a one layer card as alcohol markers would. When dry, I simply added some Nuvo Crystal Glaze.
It's kinda difficult to see the shine in this picture.
I thought that a holly spray was festive enough and didn't need any sentiment!
I'm trying to find an alternative to iPiccy (which I have been using to edit my photos and add my watermarks), as Flash, which it needs, will not be continuing after December. I have looked at several free editing programs, but  I don't seem to be able to get my head around any of them! It would be great if iPiccy could come up with a solution to their software so that it could continue, as I have really enjoyed using it! If anyone knows of an idiot proof editing program, I'd be glad to hear about it!
Thanks once more to the team at LIM for asking me to join them for this challenge!
Posted by Chrissie at 08:00