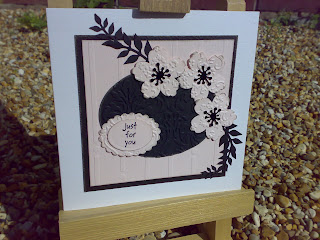 This will have to be a quick post as I can't really concentrate at the moment. My daughter just rang to say the she has had her purse stolen whilst out shopping with the baby. She needed some telephone numbers to be able to ring and stop her cards. What a worry. Her driving licence was also in the wallet which naturally has her address on so she will want to get home really quickly.
I'll come back and finish this later as I'm a bit upset!
Later...
Well my daughter has reported the loss to the police and dealt with all the necessary banks etc and as far as she knows no attempt to obtain money from her cards has taken place as yet. The problem now is that she will have to wait for replacement cards to be sent. She feels wretched.
Since learning of her problems, for some reason I looked for my driving licence, I can't think why now, but it wasn't where it should have been and so I have spent the best part of a couple of hours searching for it. My daughter rang again and during the conversation I was trying to recall the last time I might have used it and I remembered using it as ID when buying groceries in Spain in June. Sure enough the driving licence was in the purse we keep the Euros in. If only Libby's problems could have been so easily remedied.
Anyway this card is for One Stop Crafts Challenge of Pink and Black!
It's mainly diecutting and embossing with a few punchies thrown in.
Posted by Chrissie at 16:13