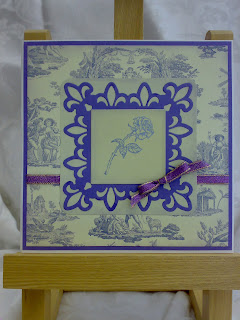 It seems that this was my only remaining piece of backing paper with a Toile design, which was the requirement for 365 Cards today, and so the colours for this card were determined by that.
The sketch evolved into that from Card Patterns this week after I had tried several of my stamps in an attempt to find a suitable image. When I finally ended up with a square shape, the rest sort of followed.
To the naked eye the ribbon is a much closer match to the paper than it appears in the photograph. Had it not been for the Card Pattern Sketch I probably wouldn't have added it, but in fact I think it's OK.
The image is part of a stamp from PSX mounted on a Spellbinders Pendant.
Posted by Chrissie at 10:44