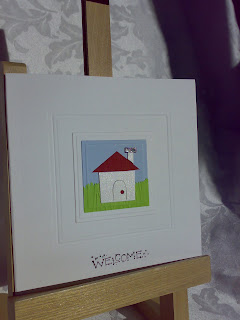 Yesterday my son and his wife became homeowners!
He picked up the keys from the estate agents and now begins the task of getting all the necessary work done in the house before they can move in. New boiler, new kitchen, new bathroom, to say nothing of the decorating to be done and carpets to be laid.What fun! rather them than me!
Until last year it seemed as though he'd spent his entire life as a student. He in fact has 3 degrees and the thought of living in student accomodation for all that time isn't my idea of fun.
Anyway he's all grown up now (32) and living in the real world.
I wish them both every happiness in their new home.
This card is more the style that I prefer... minimalist, rather than all the flowery stuff, but I guess there's place for both.
Chrissie
Posted by Chrissie at 07:57