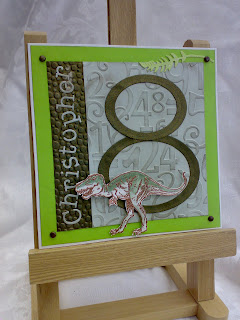 I had a lovely day with my daughter and granddaughter yesterday. The highlight of which was to watch Daisy have her swimming lesson at Waterbabies. My husband hadn't seen her swim before and was enthralled (actually he's enthralled at whatever Daisy does, but that's just him being a doting Grandpa!).
Today the carpet is being laid in their new loft bedroom. I will be staying overnight when I go to look after Daisy for one day every other week, when my daughter returns to work at the beginning of July. It will be great to have my own suite at the top of the house! (Other visitors will use it of course... but actually it's MINE!)
On to this card which is for my friend to give to her son on Monday. It's a long time since my son was 8... not sure what 8 year olds are into these days, but I thought I'd be safe with a dinosaur.
Cute Card Thursday asked for Letters and Numbers this week, whereas 365 cards wanted embellishments in the corners of the card, so both of those requirements are met I think.
I have difficulty getting things to stick on top of Cats Eyes Chalking inks... which I have used to highlight the Cuttlebug embossed numbers. I used a kind of PVA in the end I think. Dimensionals didnt want to stick either, so I've had to put a dab of PVA on those too.
I made the large 8 with my Nesties, the lettering is the Cuttlebug Typewriter alphabet, but sadly I don't know the make of the dinosaur stamp as it is an unmounted one which I have put onto EZ mount.