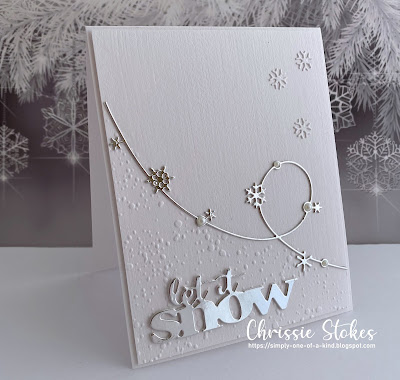 This card was a bit of an experiment. I just bought the Snowflake Wire die from Memory Box and somehow I envisaged a different texture for above and below it. I have an old Snow embossing folder from Sheena Douglass, which I absolutely love, but which is sadly no longer available. I wanted to use this embossing folder for one part of the card. SO I die cut one of the wires and then placed it onto a piece of thick cardboard, traced the upper edge and cut it out. I made three layers and stuck them together, which made them about the same thickness as a single cutting plate from my Cuttlebug. 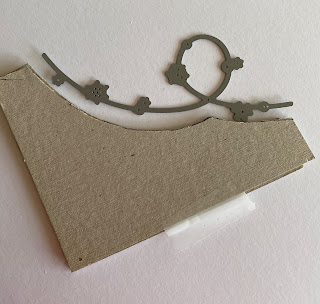 I put my card panel into the folder and placed it on the base plate of the machine, then I added my Heath Robinson diffuser (taped to the folder to keep it still), then added the top plate and ran it through the machine. Only the part which had the pressure from the diffuser was embossed.
I tried the sentiment (Stamplorations) in white but it looked better in silver to link with the wire.
Merry Little Christmas - Anything Goes
Addicted to Stamps and More - Christmas

The Holly and the Ivy - Anything Christmas