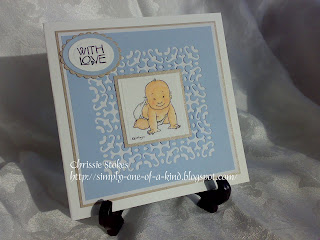 A card for two challenges. Cards & Things is an inspiration challenge, from which I took the colours for the card. Creative Card Crew's challenge is for a card for babies or children.
The lovely image from Diaper Crew is by Mo's Digital Pencil, coloured with Copics and mounted on a Nestie square. The filigree background was made with a Papermania punch. The sentiment is from Stampin' Up mounted once more on Nesties.
It's sadly ironic that I began making this card yesterday as last night my daughter had a miscarriage. Common sense tells us that it was probably nature's way of being for the best in the long run, but common sense doesn't help the feeling of sadness and loss at such a time. We're going to see her in the middle of the week, so that will be something for us to look forward to.
PS
Following the couple of questions about the background I thought it might help if you looked at the blog of a fabby crafter Ann, who has done a tutorial about this kind of punched border. I did this ages ago when I first got the punch, but I got the idea from her. You can see her tutorial here. It's a bit fiddly, but when it works it does look good doesn't it!
Posted by Chrissie at 12:17