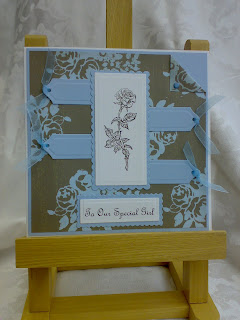 I was asked by a member of my choir to make a card for her daughter, with this specific wording and with this specific designer paper.
The paper is a free download from Canon. As you may have read in an earlier post, I have been having intermittent problems with my printer not being on speaking terms with my computer, it is also from time to time on a go slow and part prints a page then gives up. This happened with this particular piece of backing paper. A small strip was printed on one side of the paper before the printer spat it out. So I turned it over, put it back in the printer and tried again. It printed practically a whole A4 sheet the second time, before giving up, but it was sufficient for my purposes.
When it came to constructing the card I realised that I had a corner of the paper which was printed on both sides, so I couldn't resist folding it over to show the other side... it would have been a waste of ink otherwise wouldn't it!!
So here it is for Daring Cardmakers' 'We're Folding' Challenge, where there has to be some folding of sorts on the card. It is a similar design to one I made some time ago, with slight variations. The diecutting is Spellbinders and the image is from PSX. The sentiment is computer generated.
The sentiment was smaller than the rectangular Nesties I wanted to use, so I cut out the wording with the die, then moved the die-cut across a little and cut off a little more. I did the same with the scallop die, matching the scallops and cutting off about 2 of them. I do this with lots of Nesties which are not quite the size I need!
Useful tip?
Posted by Chrissie at 10:09