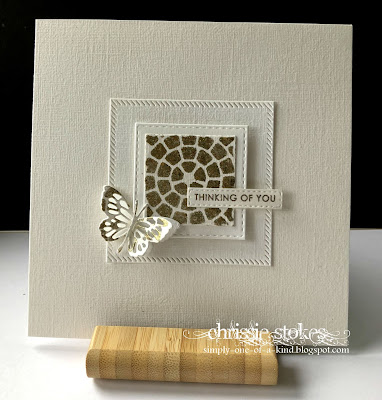 Here is another card for the CAS Stencil Challenge which is to use Gilding Flakes. 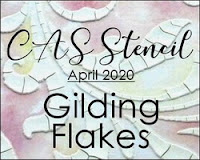 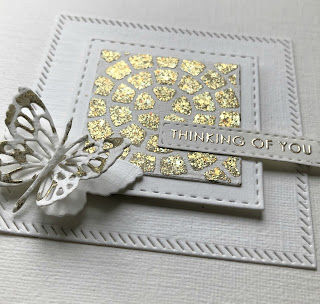 I used a Sizzix die to cut a stencil from vellum and then applied Versamark through it. After removing the stencil I added Stamp 'n' Bond and heat set it.
I sprinkled on the remains of some gold and some green Gilding Flakes which were mainly dust, but they seemed to work well enough for most of the stencil. As I wasn't too happy with the complete thing, I decided to cut it down and just use part of it! The filigree layer of the butterfly was cut from one of the less successful areas.
It was difficlt to know what to do about the embossing for the sentiment in order to have it tone with the gilding, so I mixed some silver and gold embossing powder together and I was pleased with the end result.
I am waiting for a pattern for some surgical scrubs to arrive, it's on its way apparently.  I have dug out some fabric from the loft which was been stowed away for years (some was bought in the US in about 1978) it's fabulous stuff so hopefully I'll be able to make some up jolly ones and then offer them to any takers. My son (a GP) is well supplied apparently so I'll have to see who would like them! Let's hope the pattern comes today!
Crafty Calendar - Add a Butterfly
Posted by Chrissie at 10:33