Playing around with dies 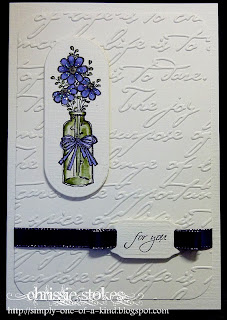 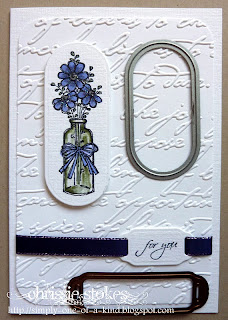 Here you can see the dies I used compared to the die-cuts they produced.
I have done a brief tutorial previously on how I do this which you can see here.
It's merely a question of cutting the card first from one end, (only allowing a proportion of the die to pass under the rollers of the die cutting machine) and then the other, repositioning the die and turning around the card, after the first cut.
I have found this a really useful technique as it means that lots of my dies can be used far more extensively.
This Imaginations image wooden stamp was sent to me as a bonus from a US eBay seller. Wasn't that kind!
The sentiment is from Stampin' Up and the embossing folder is from Cuttlebug.
We managed to eat in the garden yesterday for only the second time this year and it looks as though we'll manage to do the same again today... what a beautiful touch of Indian Summer!
CASual Fridays - Use Ribbon
I have just replaced the first image with the revised card including the loops of ribbon... I think the change has improved it  enormously... thanks CASual Fridays!
Posted by Chrissie at 09:55