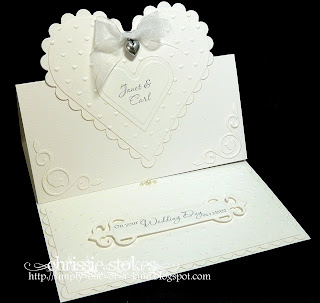 There's nothing particularly special about this easel card except I thought I would show you what I did with the Spellbinders Fancy Tag.
I made the sentiment on the computer and wanted to mount it on the card using a fancy tag, but the sentiment was too long to fit in the space, so I did a little modification.

On the left, one half of the sentiment has been cut and the die arranged around the other end of the sentiment, ready to be run through the Cuttlebug to cut the other half.
On the right you can see the finished die-cut compared to the original die.
I thought it was quite a good idea. I have reduced the size of Spellbinders dies many times, but this is the first time that I have enlarged one!

Email ThisBlogThis!Share to TwitterShare to FacebookShare to Pinterest
Labels: Wedding