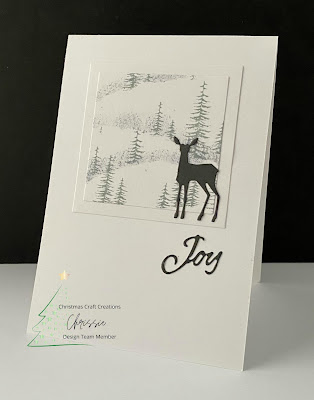 For some weeks my attention has been turned to sewing rather than card making. After getting out my machine to make lots of scrubs, I made a little dress for my 3 year old granddaughter and this was swiftly followed by a request from my 11 year old granddaughter for something for her. I couldn't make anything for her without making something for her brother and so it went on!  I managed to get these things done just before my machine developed a problem and had to be taken into the shop for repair.  I think it may prove rather expensive, but hope that it can be fixed as the cost of new ones rather took me by surprise.
Anyway back to card making!
This one is for the challenge at Christmas Craft Creations where the theme this month is Christmas trees.

This card was made with simple masking, some distress inks and an old stamp from Memory Box. I added a die cut deer from Sizzix and an equally simple sentiment. Black seemed a little harsh for the silhouette and the sentiment, so I used a deep grey instead!
DO join in the fun!