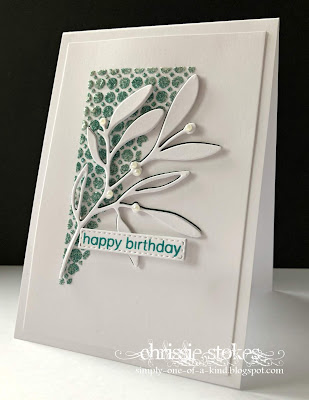 The challenge over at CAS Stencil is to use a new Stencil! 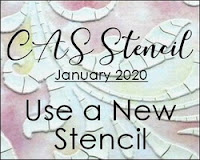 Well this one couldn't be much newer as I only made it this morning and I haven't previously used the die to make a stencil either...in fact I think it's the first time the die has been used.
It's from Memory Box  and I cut the stencil from a piece of vellum. I wanted to use embossing paste but my homemade pot had dried up a little too much and although I tried to reconstitute it, it wasn't playing ball. I managed to dig out an old pot of Poppy Stencil embossing paste, but that too was on its last legs, but it just about coped.  I sprinkled on some WOW embossing powder and heat set it. The joy of using vellum stencils for embossing paste means that there is no clean up afterwards... I just toss the lot into the bin. The palette knife is the only thing that needs a wipe. The foliage die is by Alexandra Renke, which I stacked, adding a deep green bottom layer which I offset slightly. I simply added a few tiny pearls to the berry sections of the die cut.
The sentiment is from Clearly Besotted.
Job Done!
The design actually used the sketch from Case this sketch but inverted!