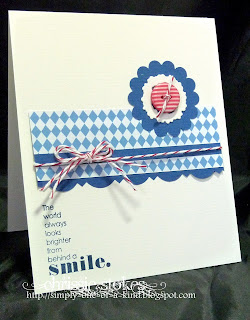 Baker's twine seems to be the flavour of the month at the moment! Here I have used some on this card which will fit with the challenge at Casual Fridays, as it has a button too!
The button element reminded me of the RAF emblem once I had assembled it... it's just the choice of colour I suppose. The base is from a Stampin' up scalloped punch surmounted with a little circle from a Marianne's die.
The sentiment is a cheap clear one from Studio g, I rather like it! The paper is from Pink Petticoat and the edge made with a Martha Stewart punch.
The design didn't start out quite like this but somehow I got a smudge on the card and my first attempt at stamping the sentiment was an unmitigated failure, so the central panel was positioned so as to cover the mishaps  up. This is what evolved after that.
I got a new phone today and it's taking me ages to sort out how to use the thing. Each subsequent model seems to be more complicated than the last.
Posted by Chrissie at 21:57

Email ThisBlogThis!Share to TwitterShare to FacebookShare to Pinterest
Labels: CAS