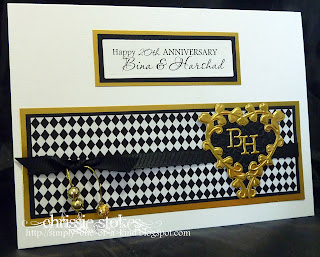 A friend asked me to make an anniversary card for her sister and brother-in-law. Apparently 20 years ago they eloped and the family were done out of a 'do' , so now after 20 years have elapsed, they are finally having the celebration.
I was asked specifically to use the colours black, gold and ivory, so here it is.
Pink Petticoat paper Cuttlebug heart and a computer generated sentiment. The bit of embellishment was from some gift wrapping which I salvaged and has been sitting in a drawer for quite some time.
My friend was pleased... so, so was I!
Woodware Stamps - Wedding or Anniversary
Posted by Chrissie at 16:25