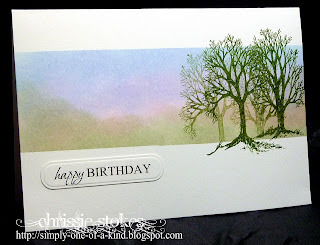 This card is one of those rescue jobs.
All had gone well until I added the sentiment (it originally started out as a one layer card), and then oops! the sentiment didn't look straight, despite using my stamp positioner! So I made another on the computer and cut it out with a Spellbinder's Tag.
I've made lots of cards using this technique, whereby I masked the card front with post-its and sponged the colours for the background in the gap. I use Mellow Moss, Pretty in Pink and Bashful Blue applied with sponge daubers.
The trees are from a Kodomo stamp, using Olive Green Stazon.
Sometimes I don't feel too happy with the sponging, (not in this case in fact) but often after the images have been applied over the top the sponging looks fine!
Alphabet Challenge - Trees
Posted by Chrissie at 06:22