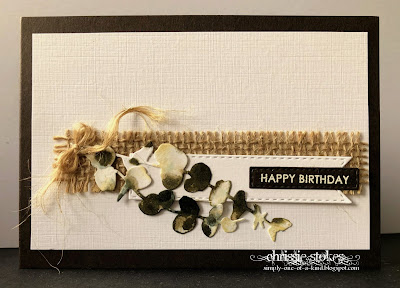 I'm afraid that the colour doesn't show up too well on this picture. The card base is deep brown and the inks used to splash on the card for the foliage are all shades of brown plus a little white and a smear of gold.
I began with the sketch from Fab Fridays 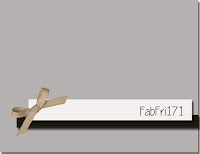 This is a challenge that I have come across only recently. I used a stirip of hessian plus a pennant shaped die cut and a sentiment from Sugar Peas Designs, which I heat embossed in white.
Just US Girls has the challenge to 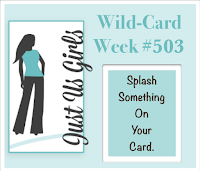 I die cut the two foliage sprigs from Alexandra Renke and kept them in the card from which they were cut. Next I splashed and dropped some Distress Inks over the card in Brushed Corduroy, Gathered Twigs, Frayed Burlap and Picket Fence, using the ink straight from the refill bottles. I spritzed with water to make the ink move around a little and then heat dried. After I had carefully taken the die-cuts from the card I smeared a little Brilliance Gold ink over a few edges.
I split a length of string as it was a little thick and tied a tiny bow, curling the ends around the handle of a paintbrush. The base of the card wasn't intended to be the deep brown, but an escapee tiny drop of ink meant I had to cut the front of the card down a little to avoid it, before remounting the panel...but I rather like the end result!
I will probably do another card actually splashing something directly onto the card base, but I hope this will do in the interim.
Posted by Chrissie at 16:27