A couple of challenges... at last! 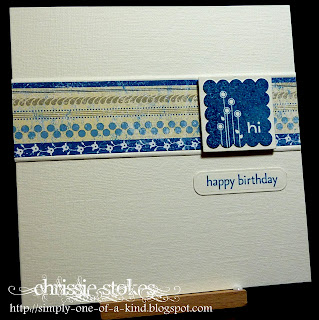 Life seems to have conspired against me making cards for challenges of late and so today I thought I'd try to rectify that, so here are a couple.
The first came about when I was trying to find a home for some boxes of SU stamps after a new shipment had arrived. This one was amongst the ones to be relocated and so I thought I would give it an outing. I stamped it with Pacific Point ink and punched it out with the SU scallop square punch, then mounted it on a Nestie square. I then spotted a scrap of matching DP in the drawer and  so trimmed a strip and mounted that on white card and scored the edges of it. Suddenly it fitted the challenge at CASual Fridays which is to have a pattern, an image and a sentiment (the latter is also from SU). 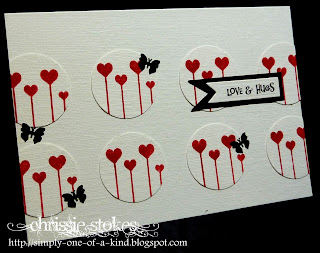 This one uses the sketch from Clean and Simple FTL182.
The little hearts come from a sentiment set. For some reason, probably during a senior moment, I didn't write the make of the stamps on the carrier sheet, so I don't really know the make. I may find out when I clear a little debris from my desk.
The sentiment is from Pink Petticoat, mounted on a Spellbinders pennant die, which I altered slightly to fit. (The black one was shortened and the white part lengthened.)
The butterflies are from an X cut punch.


My choir concert last night at St Mary's Portsea, Portsmouth, was super, I think it was enjoyed by both the participants and the audience. I certainly enjoyed the curry we had afterwards.
Posted by Chrissie at 18:32