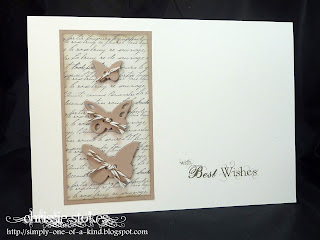 We returned home last night from a couple of weeks holiday in France and Spain. We drove through France and met up with our daughter and her family who flew to Spain to spend a week with us in a resort just outside Fuengirola.
It was a shame that Daisy (our granddaughter) was feeling a little under the weather for a few days and even had to go the see the doctor. She had a problem with one of her ears.
Thank the Lord for Calpol!
I now need to catch up on a few card orders and this is for one of them... a card with cardstock buttons  for the challenge at Just us Girls and also one of the Best Wishes cards requested by my friend.
The sentiment was computer generated and uses the fonts One Fell Swoop and AL Fantasy Type. The paper is from Pink Petticoat and the butterfly dies are from Die-namics.
We stayed at some fabulous Paradors in Spain.
I was thrilled to see that there was a stork's nest  atop a chimney of the castle where we stayed in Olite, Spain, but I had to wait a while until it showed itself. 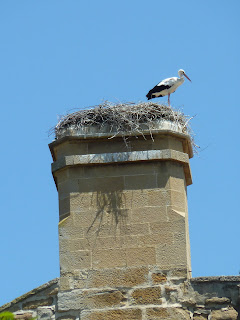 Now back to cardmaking!
Stamp Something - Butterflies
Posted by Chrissie at 20:22