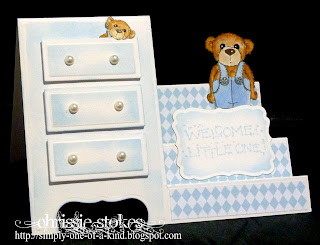 I saw this idea somewhere or other and I thought that it was SO brilliant that I just had to try it!
It's a side-stepper card where the tall side becomes a chest of drawers. Isn't that clever... I can say that because it wasn't my idea!
I cut out the legs with a Nestie but had to narrow the width of  card that I originally started with in order to get it through my Cuttlebug. Probably a good reason to get a Grand Calibur!
The 'drawers' are just embossed Nestie rectangles popped onto some dimensional tape to give them some definition.
The sentiment is one of my all time favourites which I bought second hand on eBay, it says 1989 DC on the side. It may have said more but it's a little worn.
I found the digi image when trawling through my computer and if someone can tell me the source I'll be really grateful. (I just discovered that it was by Beccy Muir) I reduced the size to pop the tiny bear into the drawer with his head peeping out.
The paper is from Pink Petticoat.
I'm really pleased with this one!
Creative Inspirations Paint - Shades of your favourite colour (Blue)
I did it Creations - Card for a child
Allsorts - For a Male/boy
Ellephantastic - New Beginnings
Crafty Catz - Use a forgotten stamp
Mami Doodles - Mostly Blue
Stamp Something - Cute Somethings
Posted by Chrissie at 17:09

Email ThisBlogThis!Share to TwitterShare to FacebookShare to Pinterest
Labels: Baby