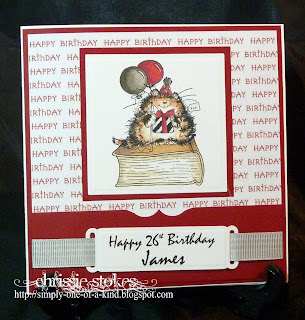 A member of my choir asked for a card for his son. He gave me a great list of possible things to include on it and I managed to get several in!
These are his name and age this birthday, a book, a cat and the colours of the football team he supports. I didn't think that was too bad going!
In order to include a book I used a digi image from Fred She Said and masked out the apple which was sitting on top of it, before printing it out. I then stamped the Penny Black Pussy cat to appear as though he was sitting on the book. I think it worked out quite well. The paper is from Cuddly Buddly and the sentiment was generated on the computer and mounted on a Spellbinder tag.
We went to our club at the Solent Hotel last night for a South African Wine Dinner with our neighbours. The food was superb and the wine simply delicious... I am feeling a little jaded now however, and we have a concert to sing this evening with our choir, I might just get my head down for 40 winks!
Alphabet Challenge - C Cats
Penny Black - Favourite things (I love pussy cats)
Posted by Chrissie at 11:29