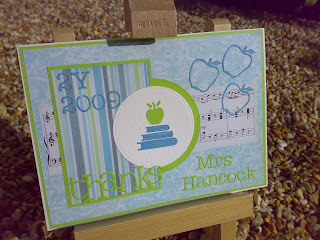 A friend asked to make a thank you card for her son's teacher, large enough for several little boys to sign. The recipient is also a music teacher, hence the line of manuscript in the background.
I used the sketch from the Dutch Dare challenge and the colours from Daring Cardmakers, which I thought were rather suitable for little boys to send.
It's mainly Cuttlebug, with Nesties used for the circles. The papers are Shabby Pincess and Canon.
Lots of fiddling about with a paper piercer, lifting off the double-sided backing after cutting out the letters, but I got there in the end.
I hope she likes it.
Chrissie
Posted by Chrissie at 18:26