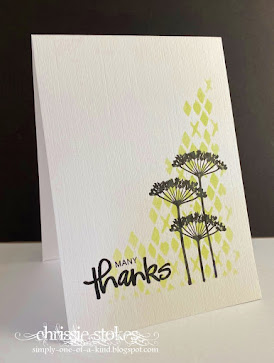 Here is a one layer card made with the challenges at AAA cards  in mind. 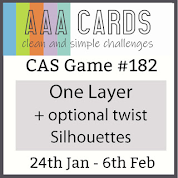 One layers are quite daunting to many, but with the advent of stamping platforms, lots of problems with poor impressions from stamps have been eradicated. Previously if a stamp had failed to give a complete image, the card had to be re-thought, re-vamped or even tossed. But now that there are second chances to stamp in exactly the same place, many first time poor impressions can be remedied.... as here! The flower heads (from Darkroom Door) were not cleanly stamped on the first try. The card, from Paper Mill Direct, has a linen texture and so there were tiny gaps in the ink impression. These were easily covered by second or third attempts. The same was the case for the sentiment. It's from a little set I got in Michael's on one our trips to the US some time ago. It says Art then a C in a circle. The set came with a little tag die too!.
For the background I made a stencil from Vellum, using a Sizzix die and brushed some Shabby Shutters Distress Oxide ink through it.
I am due to have my Covid vaccine tomorrow, Let's hope they have the supplies!
Stay safe everyone!

Email ThisBlogThis!Share to TwitterShare to FacebookShare to Pinterest
Labels: Homemade stencil, One Layer, Silhouette, Thank you