The theme at Less is More this week is to use the Faux Bleach or Ghosting technique... also referred to as stamping with water.

If a layer of water reactive ink is used as a base, when water is added, some of the colour is removed, giving the appearance of bleaching. 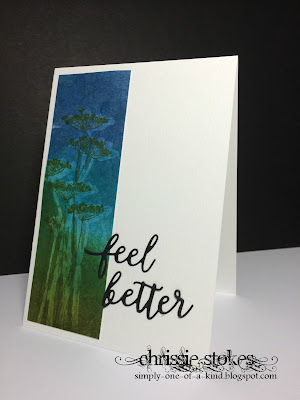 To begin, I inked the vertical panel with blue and green Distress Inks using sponge daubers and allowed them to dry. I then stamped the flower stamp from Unity after spritzing it with water, drying the card with a heat gun, which seems to intensify the effect. I wanted to use this as a ghosting effect around the flowers, so  I stamped image again, using the deep green colour.
The sentiment is from Penny Black. 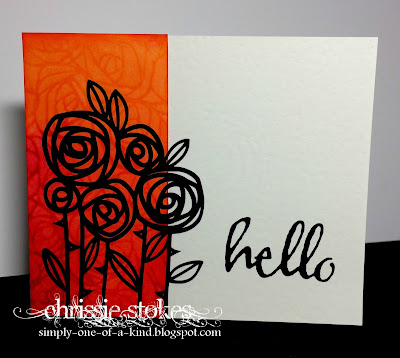 Here I used a stencil from Tim Holtz, over some sponged Distress Inks, applied fairly liberally with sponge daubers. The ink was spritzed with water and blotted then the stencil removed and heat dried. The bunch of roses is a file from Silhouette Studio cut with my Portrait. I think they match my stencil really well. I believe that the hello is a die cut from Winnie And Walter.