Another one layer week for Less is More 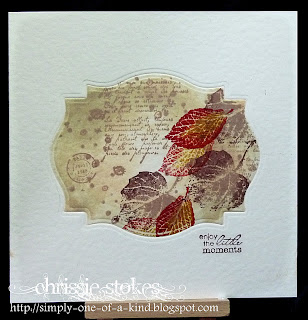 One layer cards are now one of my favourite methods of card making, but I wish I didn't ruin so many at the last moment!
Of the bunch I made for this particular challenge, one was ruined by a splodgy sentiment (remedied by a new sentiment die cut and mounted over the original... arguably making it not a One Layer card any longer, but it's another for the 'for sale' box). 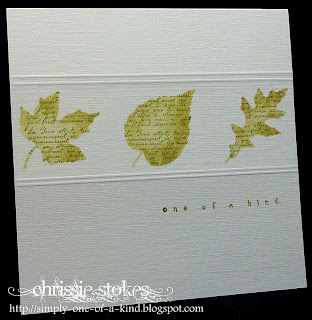 Another attempt saw me stamping a script stamp upside down, (remedied by cutting off the strip and remounting on another card base... another non-one layer)
This is the re-make of that particular card. You can see that it's not necessary to have a leaf stamp to make a  leaf themed card. This was made by inking and stamping through a Cuttlebug die cut mask. 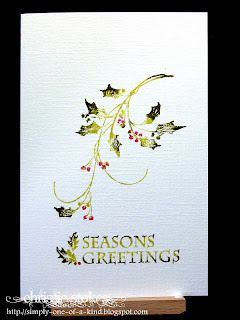 This Christmas card is a straightforward stamped image using a couple of green Distress inks and a red marker. The image is from Penny Black and the sentiment from Dovecrafts. 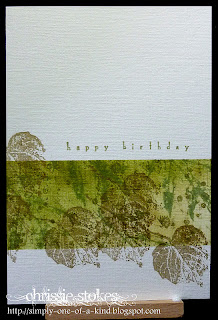 This last one was made by masking, leaving a strip which was inked and then over stamped with SU French Foliage stamps, using River Rock and Pear Pizzazz inks, with a little gold on the top.
I actually intended having the coloured strip in a vertical orientation, but the stamping looked much more at home arranged horizontally.
It's funny how things evolve as one goes along!

Mandi is back after a wonderful cruise... it seemed like she was away for ages! It's so good to have her back!


DO join in our challenge this time we'd love to see your creations. 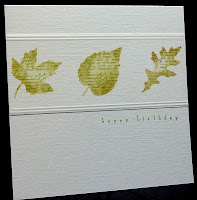 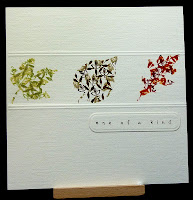 PS
These are the two rescued cards, I thought you may like to see how they ended up!
Posted by Chrissie at 08:00