White plus one other colour 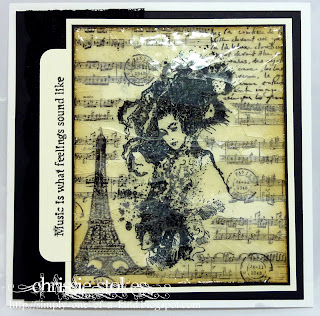 When I received a set of stamps recently from Indigo Blu I was having a play around with them and came up with this card.
I stamped the lady and then masked her to fill in the background. She, the manuscript  and the sentiment come from the same set, but the other stamps I used are from different manufacturers. The tower and the script are from U Mount and I think that the postmark may be from the same travel set, or from SU French Foliage. They are fairly similar.
The challenge from Charisma Cardz this week it to use white plus one other colour. I hope this counts as I have distressed the white in this case and also applied the cracked glass technique using Ultra Thick Embossing Enamel. However it was so thick the 'glass' has sort of broken rather than merely being cracked!
There is a piece of black lace behind the left hand side of the image, although my photograph doesn't really show it too well and I think the sentiment is super.... so true too!
Posted by Chrissie at 08:00