Yet another flower die 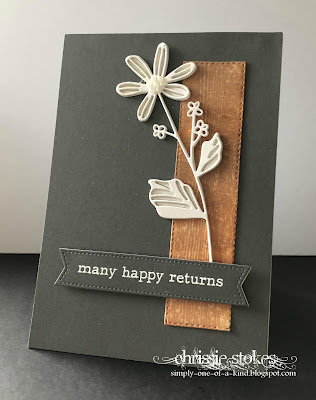 I really enjoyed making the  last card I posted and so as I had some more of the woodgrain background I thought I would make a similar card using a different flower die and sentiment. This flower from a Pink Fresh set just arrived  and so I was eager to try it out. I layered it several times and added the infils to just the bottom layer. I like the way the deep grey card base makes the flower a little more impactful! To make the panel I had to use a die much shorter than I needed, so I had to cut it part way from both ends, turning the card around and moving the die in between cuts. As it was quite a stretch there was one little bit which wasn't a perfect cut over the join, so that is hidden behind the large leaf! Here's a quick video of how I do it!

It's for the challenge at Seize the Birthday where the topping is Flowers!