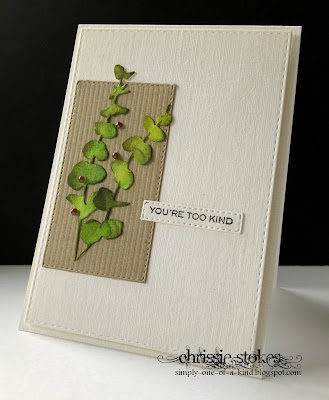 I've been having a bit of fun colouring some die cuts. I began by dropping a few shades of green Aqua Tints onto the cut pieces of card, they did swim around a little, but the different shades did have an effect. Once dry I still wasn't really thrilled with the result so I daubed on a little Distress Ink around the edges, still not quite there, so I darkened the stalks with a marker. I decided to leave it at that!
I mounted the stalks on a piece of textured die-cut, kraft card and added a tiny sentiment from WPlus9.
I based the layout on the sketch from Colours and Sketches but reversed the orientation. A few tiny brown pearls completed the card.

Addicted to Stamps and More - CAS