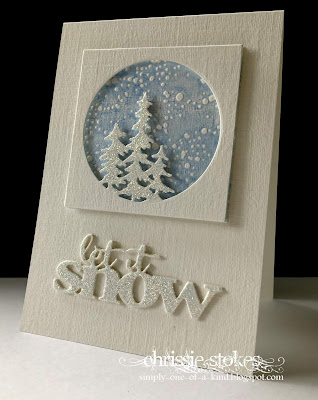 I love making Christmas cards and I was eager to see what CAS Christmas was going to challenge us to make this month. 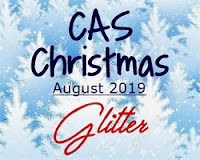 What a perfect challenge for a Christmas card!
When I was teaching, my classroom was bestrewn with glitter from about mid November onwards, much to the chagrin of the cleaning staff. Their vacuum cleaners never quite managed to gather up all the stray bits... but it was the kind of detritus that brought a smile to my face... I hate litter with a vengeance. When in Japan recently, I was SO pleased to see that to litter was a prosecutable offence and so the streets were pristine... why can't it be like that in the UK?
Anyway, I digress!
Here is a card made with an SSS tree aperture die. The panel beneath this was made with a Sheena Douglass Snow embossing folder, inked on the smooth inner side. The sentiment die is from Cutplorations, layered and glittered with some superfine glitter. 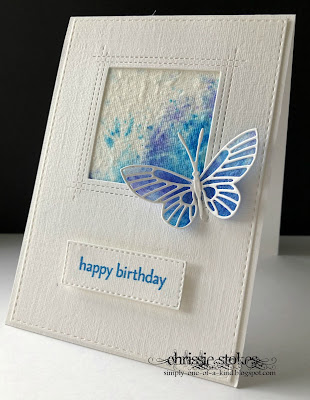 This card is for the challenge at CAS Mix UP 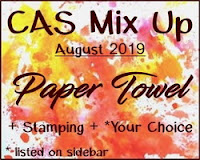 Here instead of transferring the ink from the paper towel to the card, I just separated the sheet into single layers and added a portion behind the Peek a Boo aperture.  I think it adds texture as well as colour. I also used a piece for the back of the butterfly. The sentiment is from Stampin' Up.
This is my second attempt in as the first one, the paper towel was stuck down badly and so was chucked! I think it looks particularly good for the butterfly's wings so I may be using this technique again in the future.
Today I am going to visit a friend I made through crafting and she is going to teach me how to crochet an Octopus. These are very special and are made to very exacting standards to give to premie babies in their incubators or cots, as the tentacles seem reminiscent of the umbilical cord and seem to give the babes a sense of reassurance and comfort. Many mums of premie babies have been really grateful for them. I only hope that I can manage to get the hang of the technique. Only the perfect ones which pass the scrutiny test will be accepted to give to the little ones.
Wish me luck!