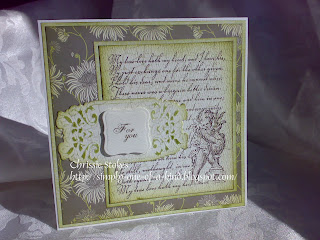 Today's challenge from 365 Cards is to include the word 'SO' somewhere on the card. I have a huge sentiment which reads 'Thanks so much' but that seemed too easy, so trying to think outside the box a little I decided to look through my stamps to try and find something a little different. I came across this one from MSE which is a poem by Sir Philip Sidney and has the word 'SO' in it just once. If you would like to click on the picture to zoom in, you can probably just about see it beneath the bookplate. In case it's not too clear, here is the poem in its entirety.
My true-love hath my heart, and I have his,
By just exchange one for the other given.
I hold his dear, and mine he cannot miss:
There never was a bargain better driven.
His heart in me keeps me and him in one;
My heart in him his thoughts and senses guides:
He loves my heart, for once it was his own;
I cherish his because in me it bides.
His heart his wound received from my sight;
My heart was wounded with his wounded heart;
For as from me on him his hurt did light,
So still, methought, in me his hurt did smart:
Both equal hurt, in this change sought our bliss,
My true love hath my heart and I have his.
From Arcadia
The sketch I used for this card is from Clean & Simple Challenge #63
I'm afraid the sunlight has bleached a lot of colour out of this photo. The papers are Laura Ashley and Cuddly Buddly, the bookplate is from Spellbinders 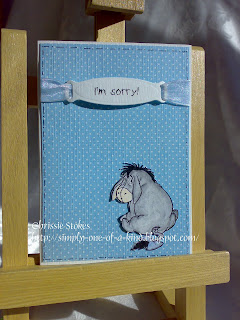 I made this Eeyore card for Stamptacular Sunday Challenge yesterday, but with the evenings beginning to draw in, the light wasn't good enough to take a picture of it. I really must do something about getting some lighting for my piccies.
The challenge is entitled Character Counts, where a cartoon character should be featured. I only have a couple of relevant stamps but love this one of Eeyore looking so forlorn. I desperately wanted to add more to it but I really think that the starkness of it, together with the blue background adds to the sentiment!!
Posted by Chrissie at 12:01